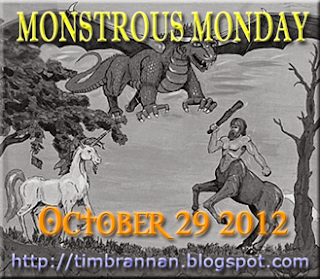 My choice for Monster Monday is the Salt Vampire aka The M113 creature in Star Treks classic episode 'The Man Trap.' Shes the last of an intelligent species which beams aboard the USS Enterprise and gives Captain James T. Kirk the shock of his life, hehe. You gotta love this episode with those sad drooping eyes and spikey fangs staring back at you played out by Sharon Gimpel.

This monster is enough to to give anyone the heebie geebies for Halloween. Perfect costume for tricker treating eh? So ask yourself one little thing. Could that lovely face actually have a conscience or a cold calculating mind? Each of M113's fingers has three sucker like feeding organs designed to suck the salt out of humans! So be on your guard trekinators for Salt Vampires! LOL! 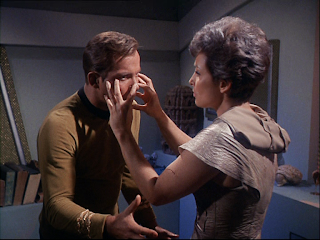 Remember When the USS Enterprise's landing party first encountered it? Dr McCoy gets hot and bothered over Nancy Cramer, Kirk saw a confident middle aged woman in her 40's and Green saw a pretty fetching blonde. Each crew member saw a trustworthy or appealing lifeform, however all is not what it seems. In reality what they were really looking at was the Salt Vampires telepathic trickery.' It really had no other way to communicate with the USS Enterprise crew or Proffessor Robert Crater. 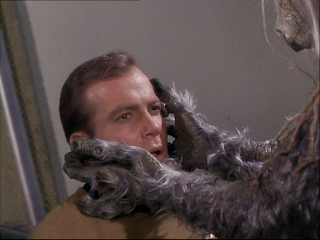 The Salt Vampire's neat trick immobilized and captured its prey very easily. Unfortunately the monster sees humans as FOOD but before snacking, it captures an image from its victims minds and then hypnotizes them.  Its a deadly monster that doesn't just kill feasting off salt, it renders humans defenceless torturing them as it moves in for YUM 'meal time.'  So watch out Trekkie, you might just meet one for Halloween! Hehe. 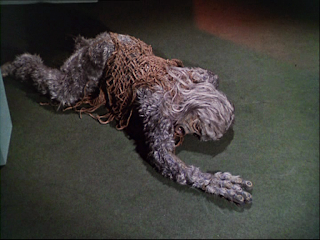 Spock survived only thanks to his copper based blood! LOL. Why do you think the Salt Vampire looked so sad? Was it because she ate so much salt? perhaps time had caught up with the old devil? How old do you think she was? Maybe the Salt vampire had a conscience after all?

Did you enjoy the cool music video for The Man Trap by Five Year Mission?

What is your favorite Monster?


Vampire Long and Prosper, Trekkers, Trekkies and Trekinators!
Posted by SpacerGuy at October 29, 2012

Turned out to be not so pretty after all!

Good ol' Dr McCoy, he finally came to his senses.

Plays on the basic insecurities of the dating experience - the person you're attracted to isn't at all what they seem.

Not only did she turn you into a salt lick, she turned you into a crying salt lick. Great choice Spacerguy.

My favorite Star Trek monster is the Horta. But it is not a monster. That's important to note.

You've got me thinking trekinators. Which monster would win in a fight to the death? The Horta or Salt Vampire?

Silicon based life vs life that depends on sodium chloride. I think we need a chemist to solve that one.

Wheres Dr McCoy when you need him?