How Sharper Than A Serpents Tooth

Kukulkan is an ancient alien entity with semi-omnipotent powers. In Star Trek's 21st animated episode, "How Sharper Than A Serpents Tooth" an immense energy field appears which encases the Enterprise... its a trap!

The winged serpent Kukulkan announces to our USS Enterprise NCC 1701 pals that they've got one chance to prove themselves worthy by solving a puzzle. Its a test of survival, pure and simple.

The fun begins when Kirk, McCoy, Scotty and Ensign Walking Bear are transported to a strange city.

Kukulkan beams them to a "Menagerie" displaying his imprisoned zoo specimens where a battle of wits is played out. 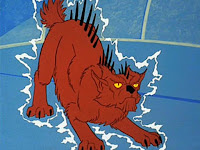 Instead of "We Come In Peace," The Enterprise good guys smash open the zoo cages, unleashing the galaxies fiercest feline beast upon Kukulkan.

Poor Kukulkan scampers away in sheer mortal terror because hes afraid... but afraid of what?


Live Long and Prosper, Bloggies, Trekettes and Trekkies.
Posted by SpacerGuy at July 22, 2015

I think the artwork for this episode is particularly nice.

I remember that one. Had some cool creatures.

Can I assume the red-shirted ensign dies at some point?

Ensign Dawson Walking Bear is the helmsman in this episode who just so happens recognises the winged creature, Kukulkan. Walking Bear was lucky because he survived which is unusual for most Redshirts so I guess being an Indian Comanche helped.

A wonderful episode and it really captures the multi-culturalism of the series. A power cat doesn't hurt either. Better than photon torpedoes!

Fun. I have obviously been missing a lot...

Yes, I remember it too, not animated though but with the real characters.

A Beer for the Shower said...

That Capellan Power Cat is pretty badass looking. Now that's the kind of creature I want to be walking when I'm taking a stroll alone at night.