A trained trusted fighter pilot sipping her morning coffee aboard the International Space Station orbiting Earth. Now what does that remind you of? USS Voyagers NCC 74656 Neelix will tell anyone brewing espresso requires precise scientific engineering when in space. Remember the bride of Chaotica?  "I leave it in your capable hands." 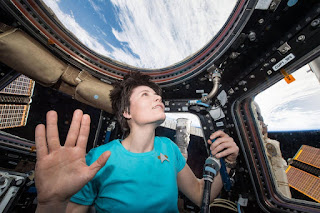 So what does it take to become an  astronaut in outspace boldly going where no earthie has ever gone before?

Lets not fool ourselves trekkers,  put away the toy phasers  😁😑 Its time for work! Heres what Samantha Cristoforetti achieved vs NASA and STARFLEET's recruitment fundamentals.

1. You need Brains, nerves of steel and sharp wits

5. Four months at Ecole Nationale Superieure and at l'Aéronautique and at l'Espace work on aerodynamics

6. Wrote Masters thesis in solid rocket propellants learnt at the University of Chemical Technologies in Moscow, Russia. - Its interesting despite all the competition in the world  😁 things are only impossible until they are not but one fact is clear.

Scientists, Doctors and Astronauts unite sharing ideas, technology and resources across all nations for the prosperity of our happy ball of humanoids on our world, in our universe just like in Star Trek. The significant message Samantha Cristoforetti is making by wearing her Star Trek uniform couldn't be more evident. Peace on Earth. Save Earth for future generations being our primary mission.

8. Samantha joined Italian Airforce academy in 2001 and graduated in 2005

10. 2005 to 2006 Air Force base in Texas received Euro/Nato joint jet Pilot Training. She became a fighter pilot assigned to the 132nd Squadron, 51st Bomber Wing based in Italy.

12. Flew MB 339 and served the Plan and Operation Section for the 51st Bomber Wing  in Italy.

13. In 2008 Samantha joined the 101st Squadron , 32 Bomber Wing based in Italy to complete training for AM-X ground attack fighter which makes her a Captain in the Italian  Air Force and a trekkie one😁

14. 500 hours logged having flown six types of military aircraft SF-260, T-37, T-38, MB-339A, MB-3339CD and AM-X. Samantha Cristoforetti was ready, trained and an ultimate trekkie badass. Check her out. Shes got the missiles and the ultimate ball breakers so no messing with her!

The kicker is after all the nukes knives and sticks enough to defeat any delta-force in the federation 😁she resigned on 31st December 2019 but you know what this means readers don't you?

15. Today NASA selection process is tough. You've got to be highly trained and alert with degrees, candidates must also have skills in leadership, teamwork and communications. You know The motto of Starfleet Academy is "ex astris, scientia which means "from the stars, knowledge."

To qualify, entrants must first meet the basic requirements to satisfy Starfleet by submitting to a test. So NASA (who consulted Gene Roddenberry because his starship designs were so precise) has the same goals and selection protocols only in a different timeline.

Samantha Cristoforetti was selected as an ESA astronaut in September 2009. She became a bonafide Astronaut in November 2010. 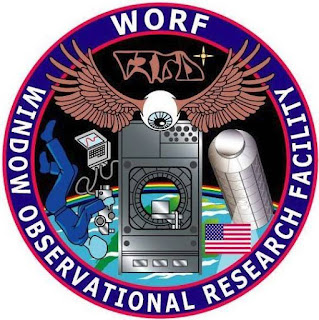 What does the W.O.R.F. patch represent?

2. When NASA was designing an Earth observation facility for the ISS to make use of its optical quality window, its formal acronym became the Window Observational Research Facility