Remember Star Treks TNG episode " The Host?"
Chief Medical officer, Dr Beverly Crusher gets the surprise of her life when she falls in love with a trill humanoid who hasn't got a lot of time to live.
Poor Beverly, stunned, discovers that her lover, Ambassador 'Odin' has an intelligent entity likened to the Aliens "Creature" within. The only difference being Odin's organism was kind, alive and actually quite peaceful!!! lol  unlike the xenomorph in aliens.
On the surface Ambassador Odin has accepted his fate only Beverly hasn't. The "organism" is in a dicey situation because the "host" body is about to die. Thats the gist of it. Its tragic. When a new replacement host Trill arrives for our friend 'Odin' it really is parting is such sweet sorrow for Beverly or Odin depending how you look at it.
Poor Dr Beverly is in turmoil..... she can do little but wait desperately with rising hopes for the arrival of her new lovers Trill host body. Then it happens. Worf speaks, Doctor! Beverly heart is and pardon the pun CRUSHED when she sees that the new host is not a HE but a SHE! A wealth of experiences and memories are transferred and eventually passed on to the new trill host except all is not what it seems..
When Kareel arrives in Sickbay she springs a surprise on Beverly. WOW! Little time is wasted and a successful operation delivers 'Odin' who emerges as a blonde beauty clearly recognizable as the Trill female  seen here.
Question  did Beverly appreciate Odin's successor picking up where Ambassador Odin left off?

Thanks. says Beverly politely, completely shaken by the experience, "maybe one day, humans will be capable of more."  Gates Mc Fadden aka Dr Crusher in this episode took the news rather well don't you think?
TNG's episode "Booby Trap " is where Geordie does his best to get it on with Christy on the holodeck. He spends several hours perfecting the ideal love-nest holodeck programme only for it to end like a bad transporter accident. - Yeah, I know, don't tell me, I'm the perfect nice guy.- says Geordie trying to save face. How come Geordie has lousy luck with women on the holodeck?
In The Next Generation, Susan Gibney plays Doctor Leah Brahms in episodes "Booby Trap" and "Galaxy's Child", appearing as a holographic character in the first, and as a "real" person in the second. Two distinctly different characters. So Geordie the Chief engineer activates the hologram, Dr Leah Brahms on the holodeck at Utopia Planitia Shipyards and after talking to her, the Chief Engineer figures, ouch, freezer woman. Heck we've the USS Enterprise-D to save. A few adjustments to the computers concept of Dr Leah Brahms original programming will speed up things, 'cos like Brahms is COLD and that won't do.
So, with the wizardry of the Enterprise-D flagship, Geordie adds a few personal touches of his own to make Leah more receptive and affectionate to the situation. Of course the tweaks are all in keeping with the engineer's line of duty whos trying to save the Enterprise and perfectly ethical, ahem. So he snogs the babe of his dreams at long last! Sure it was just a goodbye present, right? 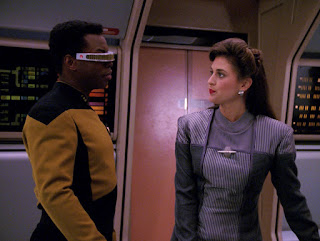 Image Owner: Paramount Pictures and or CBS Studios
TNG In "Galaxy's Child the real Leah Brahms arrival causes quite a commotion. Uh Oh!!!!  Geordie is so pleased with himself and can't wait to meet the real Leah in real living color and introduce himself. It just feels so right and knowing everything about Leah from her Starfleet records sure the love magic had to happen. had too...
right?  right???
Like a lovesick teenager falling all over the place, hanging on to her every word, Engineer Geordi plans his big play. Uh Oh!!! In real life Leah Brahms is the proverbial freezer woman but thats all water under the bridge right??? Got to be right??? Got to be....
but when she reacts angrily and discovers what Geordi been doing to her beloved USS Enterprise NCC 1701-D engines.(She originally designed them at the Utopia Planetia Shipyards) Sacrilege and knowing Leah, you really have to watch this one to get a measure of her icy cool, she likely felt like whooping Geordie, just look at that photo of the two of them.
Later, on her own, Leah finds La Forge's hologram re-creation of her on the Enterprise-D holodeck and her dopple ganger is kind of funny. Let me know what you think in the comments below.
Image Owner: Paramount Pictures and or CBS Studios
In Star Trek TNG the "Naked Now" the Enterprise-D crew get infected and start acting bezerk when they return from an away mission. Tash Yar, a real stunner in this episode sets her sights on Data the android, adding him to her list of conquests. She has a curious expression on her face cornering Data who lights up her eyes. Data is naturally baffled at first but being an android doesn't resist her. Tasha leans forward expecting more so he yields.
"Data, You are fully functional aren't you ?" " I am functional" replies Data
" HOW fully functional?" demands Yar, smiling eagerly like a hungry little cougar.
" In every way!" responds Data
" You little Jewel" responds Tasha leading the curious android away.
In Star Trek's TNG " Hollow Pursuits" Deanna Troi is programmed to respond affectionately by Reginald Barclay. Reg's fantasy holodeck re-creation characters are more real to him than the USS Enterprise-D crew. How sad is that? Hes having difficulty integrating with the Enterprise crew so the holodeck is the perfect escape for him.
Deanna's holo-character is programmed as the Goddess of Empathy and is loving and caring. Indeed, as Barclay joins her, Deanna senses his confidence and arrogant resolve, and that excites her, so she tells him. Feeling rejected and the need to vent at his crew mates, Reg creates the three musketeers.

We see a cheeky Captain Picard, a short, unimpressive, wandering Commander Riker, whom the real Deanna takes much pleasure in laughing at. "There's nothing wrong with a healthy fantasy life, as long as you don't let it take over," Famous last words until Troi discovers the Goddess of Empathy. The real Deanna tries to deactivate her dopple ganger but Riker has others ideas. The smirk soon vanishes from the Counsellor's face. Commander Riker, humiliated by the previous Holo-Riker experience takes his time to enjoy a good belly laugh by watching Deanna get a dose of medicine from her own Goddess of Empathy and keeps her there.
No, no, this is part of Barclay's programme right? We can't delete her!
Computer belay that order. Suffice to say, Reginald Barclay had a lot of explaining to do.
What say you trekkers,  was Riker right in teasing Deanna? Did Reginald Barclay take his Holodeck venting too far? Tasha Yar looked really beautiful in season 1 didn't she? Did Geordi disrespect Leah Brahms USS Enterprise-D engines? Odin and Kareel is definitely a new one for the books even by todays standards. What do you think?
Live Long and Prosper Trekkers!
Posted by SpacerGuy at November 17, 2021