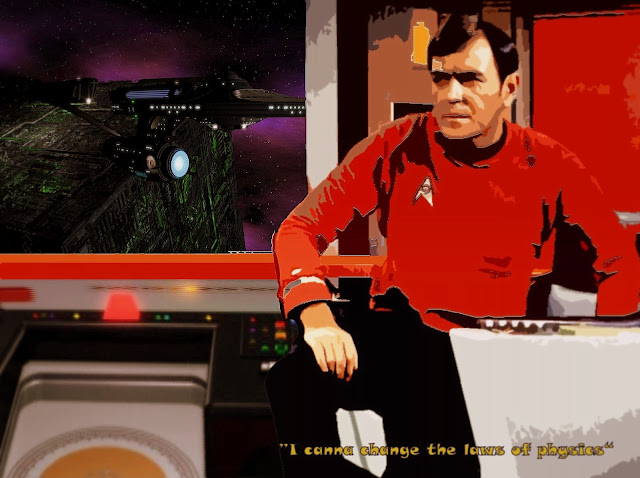 I wrote Scotty's laws of Physics as a tribute to Jimmy Doohan. Scotty never sugar coats the hard facts which is why Kirk always listens to the USS Enterprise's Miracle Worker! (It might take a while to load)

1. Call me Scotty. I may be captain by rank... but I never wanted to be anything else but an engineer. 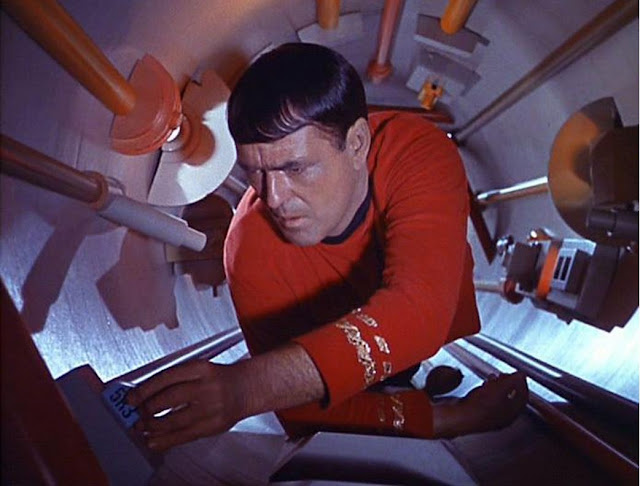 2. "I cannae change the laws of physics! I've got to have thirty minutes!" Scotty trying to save the Enterprise, spiralling down out of control. Ship's outer skin heating rapidly due to friction with planet atmosphere. 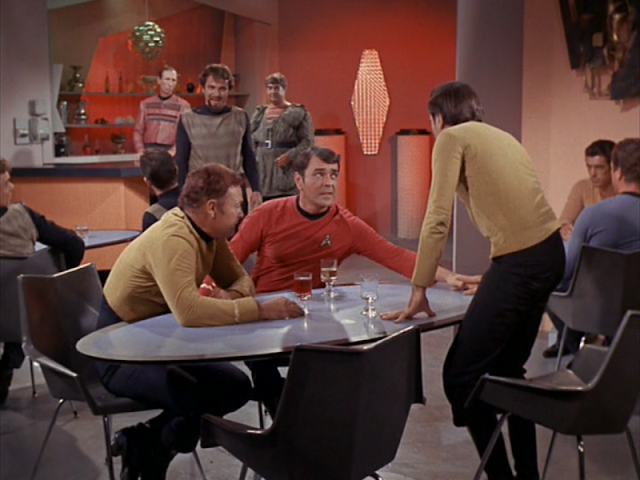 3. Don't react when Klingons call Captain James T. Kirk a tin plated over bearing, swaggering dictator with delusions of Godhood. Keep your cool, sit down and finish your drink. Its simply not worth fighting about. 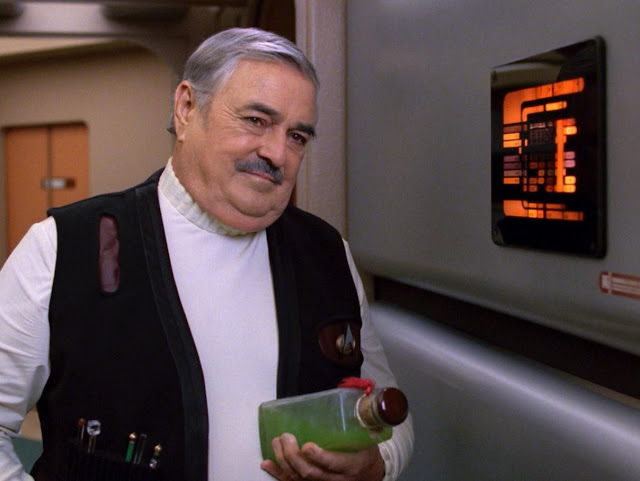 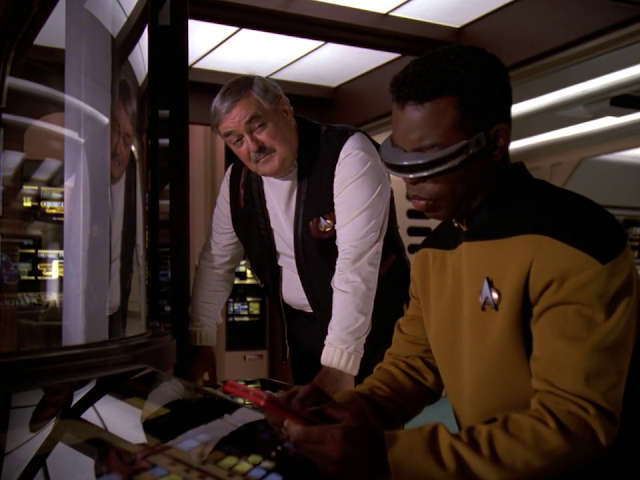 5. "Starship captains are like children. They want everything right now and they want it their way. The secret is to give them what they need, not what they want." "It's borderline on the simulator, Captain. I cannae guarantee that she'll hold up!"

6. A fused dilithium crystal converter defies the laws of physics when trying to repel Klingon warships. The warp engines cuts off power to the phasers and shields without additional dilithium. Fortunately raw crystal necklaces are just as powerful as the Dohlman of Elas's tears. 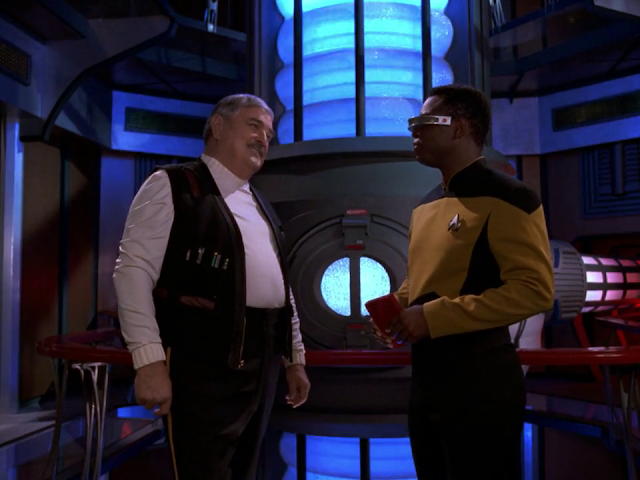 
SCOTT: I was a Starfleet engineer for fifty two years, Mister La Forge. I think I'm still useful.
LAFORGE: You're right. We'd be grateful for any help you can give us.
SCOTT: Good. Let's get to work. 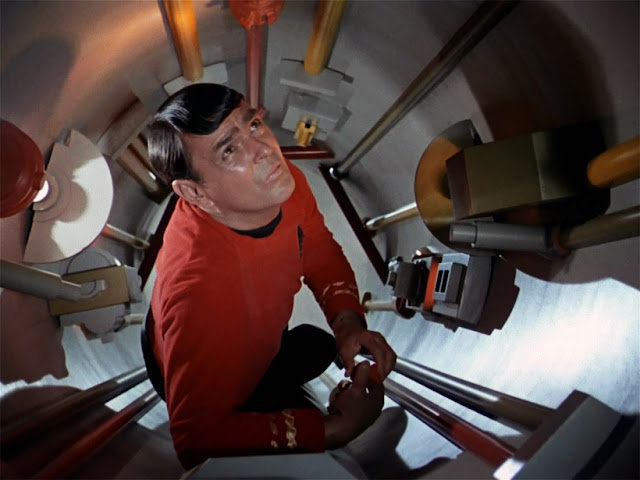 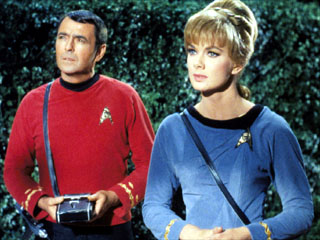 9. Life for engineer Scott is lonely hopping galaxies aboard the USS Enterprise NCC 1701. Lt Carolyn Palamas, a fresh young lass serving in the Enterprise's Archaeology and Anthropology department was stolen by the Greek God Apollo who won her affections. 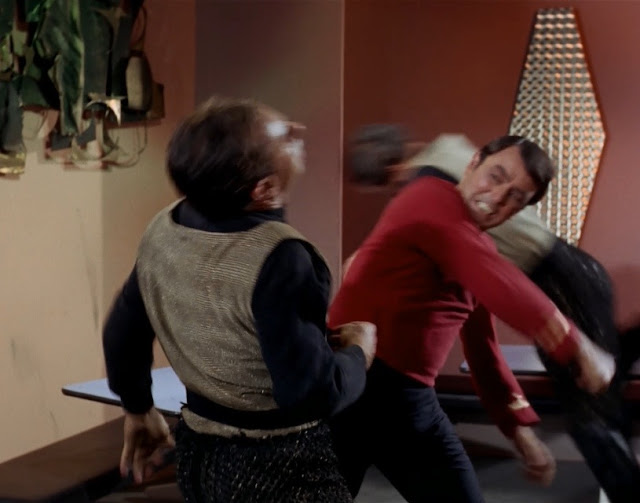 10. Always stand up to Klingons who insult the USS Enterprise NCC 1701. Shes not a Garbage Scow and will never be hauled away as garbage. We're big enough to take a few insults but the Enterprise is a matter of pride worth defending. Stick to your phasers on this!

12.   Strong and alcoholic, Dr. Leonard H. McCoy would approve. Heres Scotty and Picard raising a glass to the USS Enterprise NCC 1701. "Its like the first time you fall in love, you don't ever fall in love quite like that ever again." So down the hatch, a bottle of the green stuff will help solve complex engineering problems every time. 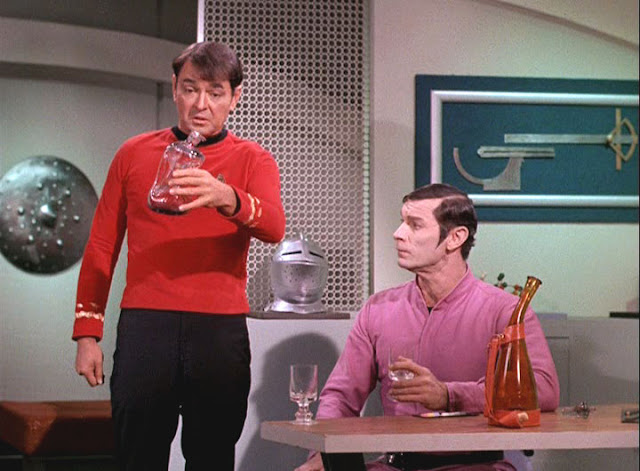 13. Mr Scott has said "You 'canna beat the finest scotch in all the Galaxy." Montgomery's scotch whiskey. 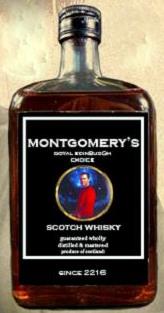 14. Prewarp cultures are the forbidden fruit in the Universe. The Prime Directive forbids interference with their development. Contact with the female natives is forbidden except for Captain Kirk....of course!

15. Never tell the captain how long it really takes to run a diagnostic or fix the dilithium crystal converter if you value your reputation as a miracle worker. Always multiply repair efforts by a factor of four! 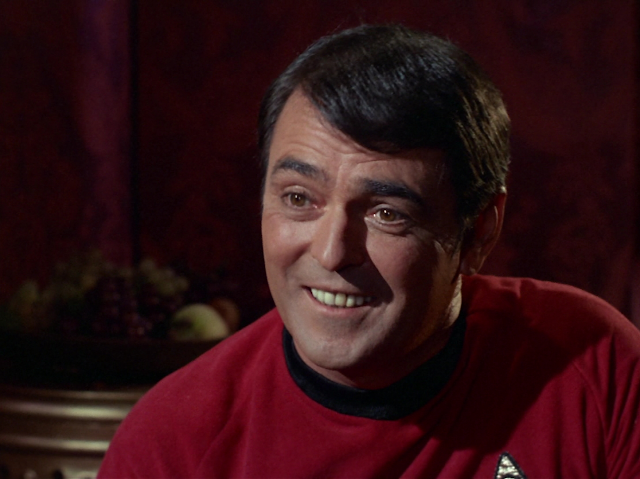 16. Confined to his quarters Scotty is thrilled.. Wise up on the latest Engineering technologies in your Starfleet Technical Manual and forget about shore leave unless ordered by the Captain.


KIRK: All right, Scotty. Dismissed. Scotty, you're restricted to quarters until further notice.
SCOTT: (big grin) Yes, sir. Thank you, sir. That'll give me a chance to catch up on my technical journals. 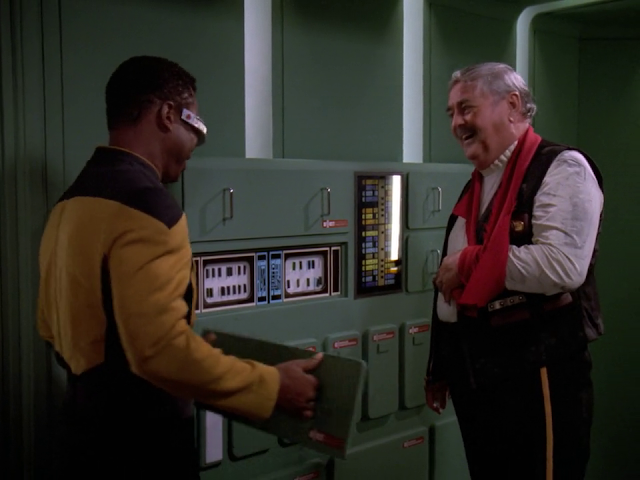 17. A good engineer will always understate a starship engines performance in his engineering log.  "A good Engineer is always a wee bit conservative, at least on paper." - Scotty, to La Forge, regarding IRC Tank Pressure Variances Regulation 42/15 (TNG: "Relics") 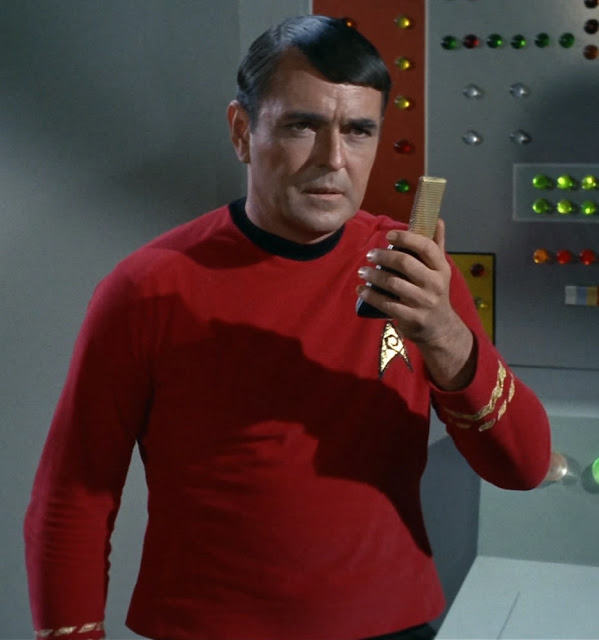 18. "Condition Green" is covert Starfleet Intelligence code telling us that Captain Kirk is in double trouble with the natives again. 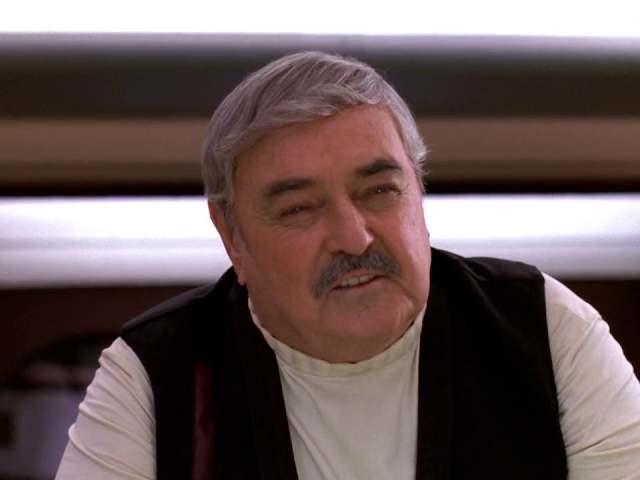 19. "I remember a time when the old Enterprise was spiralling toward PSI 2000 and the captain wanted to try a cold restart of the warp engines. I told him that without a proper phase lock, it would take at least 30 minutes. You canna change the Laws of Physics but he wouldn't believe me, so I had to come up with a whole new engine start-up routine." 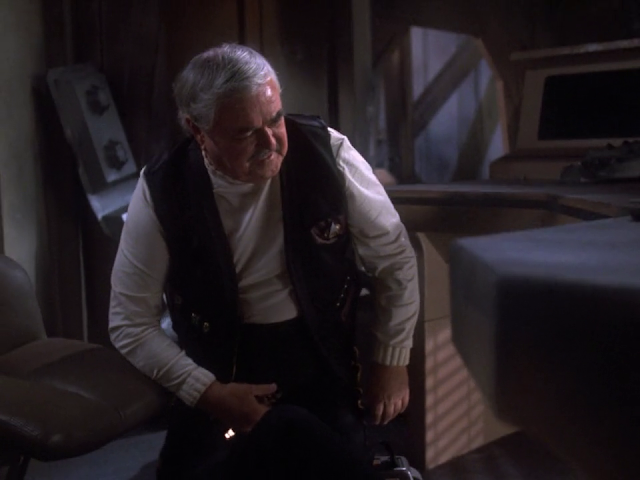 19. When the ship is in danger of blowing up, ignore Scotty's impulse specifications in regulation 42/15. Scott wrote it.

"The tank can't handle that much pressure."
"Where'd you get that idea?" La Forge and Scotty
"It's in the impulse specifications."
"Regulation 42/15: 'Pressure Variances in IRC Tank Storage'?"
"Right."
"Oh, that. Forget it. I wrote it!" (TNG: "Relics") 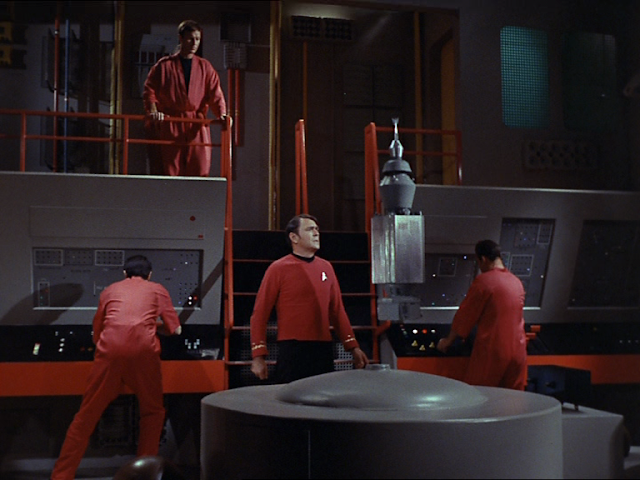 20. Be prepared to defend your ship and take risks with seconds to spare. A good engineer is capable of bypassing errant computers and jury-rigging malfunctioning warp drives which will place you in peril close to high voltage currents, odd power surges, radiation, coolant leaks, exploding consoles and warpcore breaches. All hands battle stations, Red Alert! 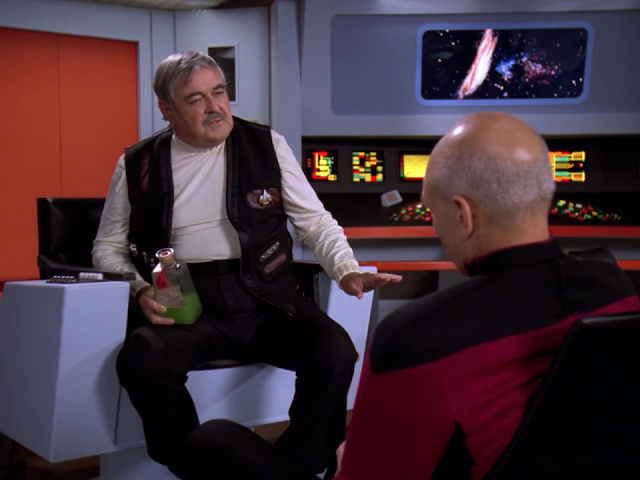 21. A Chief engineer can tell how fast his starship is travelling just by the feel of the deck plates.

"When I was here (USS Enterprise NCC 1701) I could tell you the speed we were travelling by the feel of the deckplates but in your ship, I feel like I'm just in the way!" 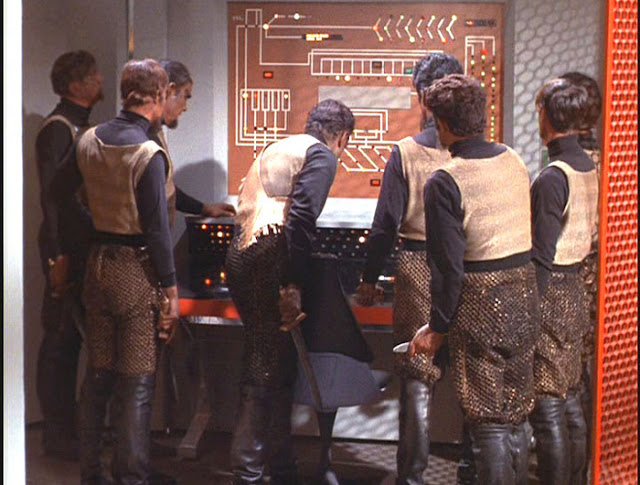 23. Its no secret Scotty always saves the ship, just in the nick of time. "Don't you worry, captain. We'll beat those Klingon devils, even if I have to get out and push!"

24. "Give me one more day, Sir. Damage control's easy - reading Klingon, that's hard!" (to Kirk regarding the HMS Bounty)

Mr. Scott - One of a kind, miracle worker of the highest caliber!
Born in Asgaard!