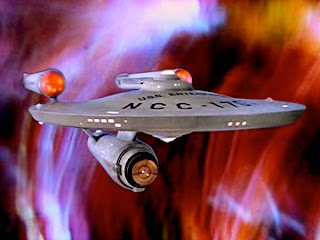 Walter "Matt" Jefferies was the director and art designer of Star Trek The Original Series, who worked closely with Gene Roddenberry. He designed the legendary U.S.S. Enterprise NCC 1701 commanded by Captain Kirk and his brave crew. It was Jefferies skill and ship's design at Roddenberry's request that produced the classic look of the Star Trek, idolized by sci fi fans today.

This poem was written in Matt's honour and for his 80th birthday by Janice Dickenson. It was also read at his funeral in 2003. Gene Roddenberry died in 1991. These guys have reached trekkies/trekkers across the world and we owe them a great debt. Thankyou Walter and Gene for infecting us with the happy spacebug.

And with gifted hand and vision
came what all the world does recognize,
as the most famous spacecraft ever built ...
the Starship U.S.S. Enterprise

That along with other planets
you created and much more,
you have boldly taken all mankind
to where no man has gone before. 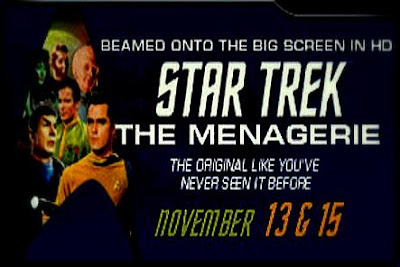 A second Menagerie Star Trek night has just been added in theatres across america and canada starting on November 13th and 15th. Due to popular demand, trekkie/trekker afficionados from all over the sci fi fabric of reality, will get to discover our Trek Heroes exploits behind and in front of the screen enhanced by computer generated animation.

A week after the special screenings, the entire first season of “Star Trek: The Original Series,” from Paramount Home Entertainment and CBS Home Entertainment, will be available in High-Definition DVD for the first time. The 10-disc boxed set offers the best of both worlds with each disc offering a Standard-Definition picture on one side and a High-Definition picture on the other. The set will be available on Nov. 20th. Remember, Spacerguy has given the word!.

Have fun trekkers, why not trek over to my "new star trek season one in hd dvd's" post for the details.

Its official! Chris Pine is taking over one of the most iconic role in trek's federation history, as the New Captain James T. Kirk in director J. J. Abhram's Movie, Star Trek XI.

Chris Pine was originally set to do a movie with White Jazz director Joe Carnahan, who has stated on his official Blog that "the young man playing Junior Stemmons has opted to boldly go "where no man has gone before" Pure Logic seems to favor Pine playing Captain Kirk in the new Paramount movie instead of White Jazz. 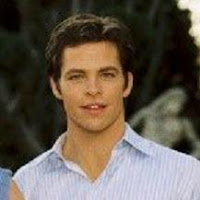 Star Trek XI will bring into focus early encounters of Spock and Kirk during their formative Starfleet Academy years. Later our trek heros become embroiled against an undoubtedly crazed alien ("Nero") with designs of criminal and doomsday intent against the mighty united federation. Kirk will definately need a starship! (But who'd give him one? Remember Star Trek III, Kirk stole the Enterprise, now that was exciting but now we're dealing with unknown forces.)

So now Captain James Tiberius Kirk (Chris Pine) has a new crew which will need to depend upon each other instincts for survival. Pure speculation on my part nominates Spock sr.(Leonard Nimoy) influencing Kirk's crew to battle the forces of evil in the quadrant!


Kirk's first assignment after graduating from Starfleet Academy was aboard the U.S.S. Farragut. (Obsession TOS) One of his first missions as a young lieutenant was to command a survey mission to Tyree's planet in 2254. The date is conjecture but we assume Kirk was seventeen when he entered the academy. 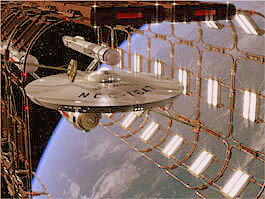 For every new trek movie thats produced star trek canon becomes a factor, which will make J.J. Abrams movie an interesting challenge because they have to go back in time and obey multiple trek guidelines, stardates, events, etc. Paramount has the script and most of the actors with no William Shatner yet, so now to quote Captain Picard "Make it so". We trekkies/trekkers demand it.

Live Long and Prosper Trekkers!
Posted by SpacerGuy at October 19, 2007 No comments:

On November 13th at 7:30 p.m. local time, “Star Trek: The Original Series” is being beamed onto the big screen in a special one night event in select movie theatres across the U.S.A. and Canada. Cinemas will feature the original series episodes “The Menagerie” Part 1 and 2, digitally remastered in High-Definition and Cinema Surround Sound.

Fans will also be greeted by an introduction from creator Gene Roddenberry’s son, Eugene “Rod” Roddenberry, and given a behind-the-scenes look at how the star trek episodes were digitally re-mastered from the original 1966 negatives. Trekkies will experience the reinvention of Star Trek's "old Tv Show Special Effects" now digitally remastered using new High Definition, CGI animation. 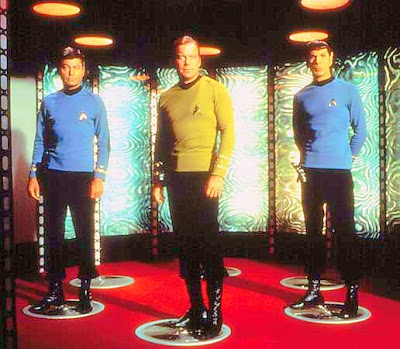 
The orchestral re-recording of the show’s theme music was re-recorded with modern, digital age recording techniques and better microphones using the original notes from the old archives. Greg Smith (Conductor) was thrilled with the new Star Trek recording.


"We're being very truthful and faithful to the original notes because its sacred hollowed ground, this theme."


Experience the Star Trek Buzz! Trekkies will be beaming in from all over the galaxy, to view this new historic 30-minute in-theatre exclusive featurette. Woo Hoo! I'm excited. Why? because I'm a trekkie too!

“Star Trek” debuted on Sept. 8, 1966 on NBC in the U.S., telling the story of the crew of the starship Enterprise and its five-year mission, “to boldly go where no man has gone before.” William Shatner as Captain James T. Kirk and Leonard Nimoy as Spock starred in the series which addressed issues of the 1960s including war and peace, imperialism, class warfare, racism, human rights, sexism and feminism.