On the day of Star Trek's 2009 official release, J.J. Abrams answered 10 questions provided by Memory Alpha's community of Trekkies. I found the first answer fascinating especially the bit about J.J. embracing and honoring what came before i.e. Star Trek TOS which is neat.

But then Director J.J. admits freely he isn't a Star Trek fan by default, (which was a surprise to me) in fact he confessed his Star Wars addiction at a Star Trek Comic Con ages ago. You should have heard the audience! This was a clever move because it set the record straight over who would be directing Star Trek 2009. Mr Abram's took the heat without messing too much with the Final Frontier, now that took guts! I suspect Paramount will get him again to make the next Star Trek movie. But isn't it possible, Abram's darkside energy of the force is telling us, Star Trek's detailed canonicity is archaic!!! clearly indicating ancient, primitive or earlier.


Wheres Scotty to explain all the gobbledygook when we need him?

"reversing the polarity of the annular confinement beam through the warp-field flux capacitor."


So I've done a little digging and found some of these "archaic details" for you to have a listen to. Is Star Trek cannon really too infused with technobabble, alien docking procedures, spatial anomalies, tachyon emitters, isophasic signatures and quantum singularities making it too hard to follow?

Q1 When rebooting a franchise, fans of the original tend to be alienated due to the attempt to draw new fans in. How did you address this when making this film? Henshin86

Answer: J.J. Abrams: The obvious challenge was that we wanted to make our own brand new thing, and at the same time embrace and honor what had come before. As a director who didn't know and love the world of Star Trek by default, I ended up telling a story for people like myself that love fun movies but are not necessarily familiar with the archaic details of Star Trek canon. However, both of the writers are huge Star Trek fans; one is a massive fan. Because of this I knew that we would be safe and on solid ground. We all did our homework before shooting. 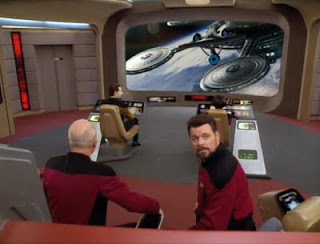