Cruel Karu passed down a cruel sentence of damnation against all Trekkies and Trekkers in our galactic universe recently, it saddened me to think an earthling could be so bitter towards us. For his sake, I hope a Trekkie doesn't track him down and shoot the evil blasphemer with a phaser set at full stun, our people know how to deal with Trekkie treachery. Here are evil Karu's words, its blasphemy I say, just reading it crucifies my Trekkie feelings. Here are cruel Karu's words:

"This much for a load of fictional nonsense. just modern mythology thats all.
Trekkies are brain dead people, go get a life. Warp engines ?? Warp 10 ?? not in a Million years... Physics doesn't allow it you IDIOTS!!!" 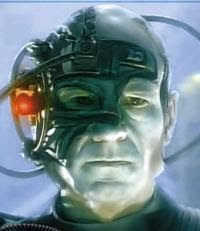 Its clear the guy actually hates Trekkies, why he's even commenting on a Star Trek subject is beyond me. The good news is Trekkie Jonn, obviously a creature of pure logical reasoning has decided to educate Karu with the facts.


Karu said, "This much for a load of fictional nonsense. just modern mythology thats all. Trekkies are brain dead people, go get a life.
Warp engines ?? Warp 10 ?? not in a Million years... Physics doesn't allow it you IDIOTS!!!"

"Before you call anyone an idiot, please be kind enough to go back to your high school days and remember that while warp drive may be impossible according to Newtonian physics, it is merely improbable according to Einsteinium physics. Very big difference."

I like your style Jonn, real nice piece of logic. My advice to Karu is: get a phaser and sleep with it under your pillow. The Trekkies are coming to get you!

It looks like James Tiberius Kirk doesn't care about his fallen security guard but nothing could be further from the truth. I made up some dialogue to fit the photo, for a few laughs.

Captain Kirk: Ahhhh to heck with him Bones, we've got bigger problems to worry about like the "Eyes of Vaal" and besides. Theres plenty more where he came from.

Spock: I'm the tallest, it should have been me.

Yeoman: Captain, that poor man has a family, aren't we going to bury him?

Captain Kirk: Nahh. His body is just a useless empty shell, now come on people! We've got a mission to complete.

Here's a classic example of one of the USS Enterprises Security guys in a red t-shirt whos been killed on the homeworld of Akuta's people, Gamma Trianguli VI in the classic episode "The Apple." In Star Trek TOS, the red t-shirt was simply bad luck! Security guards beaming down to planets wearing these jinxed uniforms were cursed, sometimes they never even made it back to the USS Enterprise.


Vaal is a ruling computerlike god shaped in the form of a cavernous mouth with fangs and red glowing eyes a sure sign hes getting angry. Kirk's landing party upsets the unnatural peaceful balance enjoyed on Gamma Trianguli and deciding to take matters into his own hands, Kirk breaks the prime directive! No surprise there. Akuta's people worship Vaal and feed him from the holy templelike altar. Vaal must be obeyed who in turn looks after the people on Gamma Trianguli VI. Kirk's crew soon learn some very strange facts about the planet and Vaal orders Akuta to take action!

Live Long and Prosper, Aliens and Trekkies!
Posted by SpacerGuy at May 11, 2008 2 comments:

I discovered a book recently called Star Trek Memories with a curiously entertaining summary written by Entertainment Weekly. At first I thought their judgement was in error because the term Trekologists was used to describe Star Trek fans, so I googled it and yes, its on the internet, along with trekster, trekkie and trekker. Gene Roddenberry, the shows creator has spoken about the fans much like a proud father would of his children which thankfully has shed much light on the subject. It should be noted earthlings are entitled to call themselves whatever they want.

Mr Spock on the other hand, would simply raise his eyebrow and and say "Fascinating" and failing that he'd say: Fascinating is a word I use for the unexpected. In this case, I should think "interesting" would suffice.
--Spock in 'The Squire of Gothos' 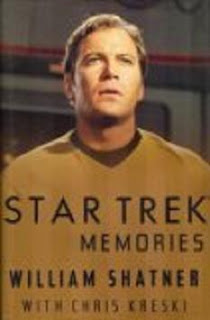 I believe Trekologists and trekster while entertaining are makey up words. Trekkie and trekker are the official terms for Star Trek fans just put "old age" and "modern" before them in that order and all will be revealed. Perhaps "old age trekkie" does sounds a bit mean but it wasn't my intention. So what is a trekkie?

Trekkies enjoying geeking out with other Star Trek fans because they are happy, logical creatures, extremely passionate about star trek. Quoting episodes comes quite naturally to them too. Trekkies can be can anyone from lawyer's to the guy who cuts grass for a living. Seeking out ways to satisfy our trek cravings is alleviated by visiting conventions and watching star trek on tv. In fact anything associated with trek like the Star Trek XI movie in 2009, the Star Trek Tours in America, Star Trek Roleplay games online etc gets us totally amped and augments the trekkie flames of passion burning in all of us. "Trekkers" on the other hand are the modern version of the Star Trek fan.

It goes without saying, that to even consider yourself a star trek fan you need to examine your own trekkie/trekker credentials.(I'm teasing you now.) Do you own your own personal phaser or communicator? Have you built any starship model ships? Can you list the best episodes, characters and technologies? How many books have you studied and which are the best ones? Who's the best captain? Theres a whole horde of star trek facts, several hundred trek episodes, trek memorabilia out there and I haven't even touched the tip of the iceberg. I am happy and proud to be called a "trekkie." Some trekkies such as James Cawley like to be called Star Trek Purists. If you can think of others, let the community know.

To get back to the trek synopsis, Let me explain first of all, that its a word for word writeup of William Shatner's Star Trek Memories with Chris Kreski. So far so good, until you read the end bit which gave me a bit of a chuckle. It starts like this....


William Shatner describes life on the set of a television show light-years ahead of its time in this collectable illustrated memoir. It's an in depth, insider's expose of the global cultural phenomenon known as Star Trek. Journey to the very beginning of the series, tour the set, hear members of the cast tell stories of how they came aboard the USS Enterprise, and so much more

Contains over 120 photographs and illustrations. And now for the best bit. Ready?