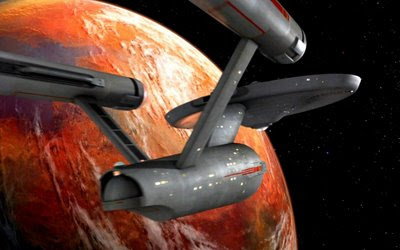 Heres a list Empire critics have composed of the 500 Greatest movies of all time. Star Wars is listed five times in Empires Movie Hall of Fame with Star Wars Episode V: The Empire Strikes Back placed at no 3. Is'nt it curious that Star Trek is completely absent from this list? Our fast paced new Star Trek XI movie has introduced a new breed of trekkie fans to the franchise (dare I even call them that!) spurred on by the sleek, daring crew of the USS Enterprise 1701 directed by Emmy and Golden Globe-winner JJ Abrams.

Empires 500 movies are an illuminating collection of reviews amassed over time from polls to dedicated fans but were the voters under the influence of Star Wars? I'm serious, Vader's power of the darkside is obviously weaving its dark spells on planet earth or else this skullduggery is a reflection of the times were in with darkside mortals outnumbering trekkie lifeforms in the galaxy.

So I'm calling all trek fans to join Empire and submit "Star Trek, The Wrath of Khan" as a NO 1 all time great. Its crunch time trekkie fans to strike back at the force! 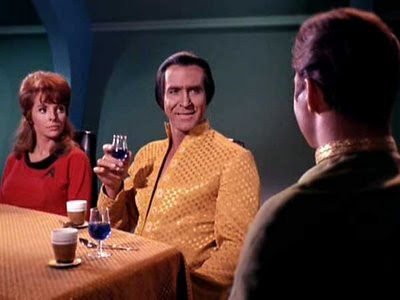 Here's a fun youtube clip from the DMPhoenix you'll enjoy. Its awesome. Vader's darkside forces are mobilized for war against Captain Picard's flagship Enterprise! Yessss! how my heart bleeds for them! Who am I rooting for? Why the Enterprise of course. I'm a fully fledged trekkie and you better believe it. I was itching with excitement to see Picard's Federation flagship swoop in for the kill and obliterate Vader's force completely. Does it happen? Quantum torpedoes vs. lasers, watch and see who wins.

I remember when I got the trekkie bug (there I go again) in 1984, I was watching Star Trek TOS on TV and eating my dinner with my brother and believe me I was totally glued. I was 14. Suddenly my mom cried out, "Turn that off!" In a state of disbelief I looked away from the TV and protested but it was no use, she looked at me with her blazing eyes and I got that horrible melting feeling just as Dr McCoy and Spock were arguing in Sickbay except this time it was about the practical use of tribbles which McCoy had grown rather fond of. Spock was being all logical and cold hearted....

Now you know how Captain Picard felt, snatched from his beloved USS Enterprise NCC 1701-D and dragged aboard that Borg cube, against his willpower by all those heartless drones.

"I will resist you with every strength in my body."


Smitten by the spacebug, I set my secret trekkie plan in motion. This was just the beginning of something new. It took a while saving up but within time, I had my own TV and was recording Star Trek TOS every week. How I treasured those classic re-runs.

Worf "They're now locking lasers on us!" On hearing this news Data has a major fit of infectious laughter.

I love the enlightening philosophical nature of trek, its really deep. So I suspect the same is true of new trek fans who having seen Star Trek XI are by now infected with the spacebug and in severe need of more trekkie fixes. Where else can we turn to except 726 episodes of five action series and one animated series. Damn those space bugs! Every single Star Trek movie including The Wrath of Khan has failed to meet the grade wth Empire isolating Star Trek to the outermost corners of the galaxy. Shame on those darkside ptaqs! They thought they could outwit us with their statistics.

Star Trek Tradition, Logic and the Needs of the Many.

Star Trek XI is now the second highest earner of Star Treks franchise with takings of $222.7 million in 31 days. This movie warped past the Wrath of Khan and has set its trajectory to overtake the reigning Star Trek epic of the universe held by Star Trek The Motion Picture. Star Trek I bagged $139,000,000 for Paramount which is a cool measure of success and a ton of money for 1979. You can bet your Trekkie dvds it won't take seven years for the next Star Trek movie to hit the big screens.


Logic dictates the needs of the many outweighs the needs of the few or the one. Does it matter Star Trek XI messed with the Final Frontier? Yesss! and what a reaction its getting from the fans. Sure, Star Trek's space time continuum has been altered but judging from the figures, previews and reports from accross the internet, Star Trek XI is successfully reaching out to people boldly going where Trek hasn't been in years.

(Blashememy!!! I can hear horrified Trekkies gasping.) "Your'e crossing over to the dark side aren't you!!" but nooooo, I'd never do that! I'm just trying to be logical about this and remember its Spock Prime's fault we're in this fine mess int the first place. Just kidding, I'm skylarking now. 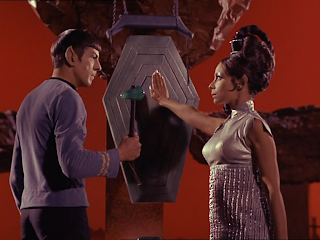 Star Trek has a lot of canon, rules and regulations known as "Trek" which can influence the eventual outcome of life and death in its timeline. For example, the Pon Far involves the Vucan Mating ceremony whereby Mr Spock is compelled to return home every seven years to purge his emotions. The poor vulchie will die unless he mates with a Vulcan chick or fights to the death with a suitor of T'pring's choice.

In any case, it really doesn't matter because Vulcans are born with superior strength and whoever is selected by T'Pring, is gonna get the spuds whacked out of him. Unfortunately she chose Captain Kirk of the starship Enterprise to fight Spock and Mr spock HAD to engage him! "This is a fight to the death". warned T'Pau. "Do not interfere!!"

In this episode of Amok Time, we get to see the Vulcan's homeworld for the first time and an angry Spock who's clearly not himself. Stricken with the desperate need to contol his desires, a much beleagured Spock is in deep meditation preparing himself for the Kal-if-fee. It was'nt until after the challenge that the flawed human half in him was torn appart by remorse. These are the downfalls of living your life in the pursuit of absolute logic...... 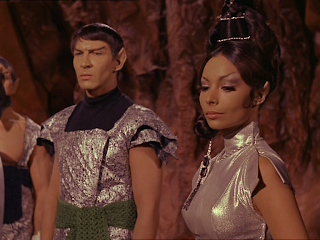 The Vulcan Ponn Farr ritual eliminates the deadly imbalance of toxins poisoning Spock's body only after the Vulcan has gone through hell (Burning of the blood) and ranting and raving like a complete lunatic but this is all perfectly normal for vulchies. In the end Spock is returned to his good old emotionless, logical self after his mating urges are quenched with the knowledge that his good friend and captain has been strangled to death by his very own hands.

Ever since Star Trek Nemises flopped at the box office in 2002 with only $43,254,409 to show for at home in the US, Star Trek has been in need of an additional generation of fans willing to give themselves over to an inspiring, action adventure with gratifying computer graphics, sound effects, lighting and movie sets essential to producing a rip-roaring action movie prequel with a stimulating and entertaining trek timeline. That time has arrived, Star Trek is back!


"Doctor, I shall be resigning my commission, of course..."
"Uh, Spock..."
"...so, I would appreciate your making the final arrangements."
"Spock, I..."
"Doctor, please, let me finish. There can be no excuse for the crime of which I'm guilty - I intend to offer no defense. Furthermore, I shall order Mr. Scott to take immediate command of this vessel."
"Don't you think you better check with me first?"
"Captain?!?! JIM!!!"

- Spock, McCoy, and, much to Spock's surprise, Kirk.