The motto of Starfleet Academy is "ex astris, scientia," which means "from the stars, knowledge." To qualify, entrants must first meet the basic requirements to satisfy Starfleet by submitting to a test. If chosen the next step involves completing the entrance exam which is conducted over a three day period at a designated Starfleet Testing facility. The Academy exam itself identifies leadership values in promising candidates eager to prove themselves. Integrity, intelligence, courage, imagination, and determination are core qualities of Starfleet Officers ready for battle but committed to peaceful coexistence in the universe. The entrance exam contains the following tests: 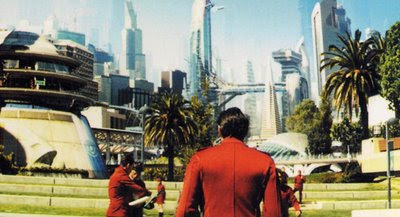 In 2364, Relva VII's testing facility is where Wesley Crusher competed to gain admittance to Starfleet but failed the first time. Citizens from outside the United Federation of Planets require a testimonial of good character from one of Starfleet's higher ranking officers before being permitted to take the test. Cadets who excelled in class gained privileges as was the case of the Academy's Red Squad, an elite group, who were entrusted to pilot a starship without supervision. Starfleet has demanding standards and applicants must pay strict attention to its rules and procedures.

Successful entrants are expected to excel with their class at a multitude of mental and physical tests or merit the wrath of the Academy Instructor. Based on earth, the academy is located at the Presidio of San Francisco. Founded in 2161, Starfleet Academy's specific goal focuses on the quest for knowledge and the preparation of its cadets for galactic unknowns especially in the cadets first year.

After four years, cadets graduate to the worthy position of Starfleet Officers and are promoted to the rank of Ensign. For the first time in their lives excited cadets face the prospect of a really groovy future serving aboard a starship and are looking forward to serving and defending the Federation with their very lives. Space exploration also presents many opportunities to encounter new alien lifeforms and discover strange new worlds. Starfleet will put its officers on the front lines where scientific research, rendering aid, tensions and starship battles will broaden crewmens appreciation and perception of alien races and species in the universe. 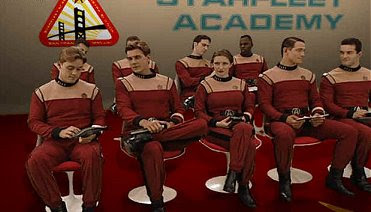 Cadets will soon discover Starfleet Academy's curriculum challenging them to their limits with some trainees buckling under pressure in the first year. Starship duty is'nt for everyone. In the following years cadets will choose to concentrate on a particular field of knowledge such as engineering, starship navigation, medical degrees take eight years to complete, piloting, scientific research, stellar cartography, communications, security, with the smartest and uber-intrepid of students setting their sights on a career in Starfleet leading to command of a starship.

The Academy's notorious Kobayashi Maru Training Simulator is the next step for these special breed of command cadets. The Computer Simulation will test their nerves for steel and how they react to fear. Senior Officers will scrutinise the cadets response times, disposition and reactions under pressure to get a mindset on the candidates suitability for command. Captain Kirk (TOS) received a commendation for original thinking for being the only Starfleet cadet to have defeated the Kobayashi Maru Test. Lieutenant Savik accused Admiral Kirk (Wrath of Khan) of cheating when he explained his solution for outwitting the Kobayashi simulator by secretly programming the computer.

Starship Captains are a gutsy, rare breed of fast thinkers, well motivated and used to encountering aliens lifeforms, Astronomical Objects and are responsible for the lives and safety of the crew. Captains, Helmsman, and Navigators exercise evasive manoeuvres deployed by the ships computer or else Bridge Officers advise the captain to activate the ship's defense systems manually in order to combat stealth attacks on starships. Officers are trained in peaceful negotiations, hand to hand defense lessons, survival training, starship navigation, piloting, weapons deployment and starship operations which is key to reactive defense and securing the starship from an aggressive attack. Starship defenses are usually activated when warring ships are detected sending the crew from yellow alert to red alert. The Federation however, is one big happy family but all is never what it seems in space.

Captain Picard is an exceptional leader at finding peaceful solutions for races like the Sheliak Corporate, who were repulsed to find human creatures infesting one of their planets and demanded their immediate removal. Picard's entertaining feats of logic ultimately persuade the Sheliak to cave in to his demands (and made me laugh big style) when he nominates the Grizella who were in a six month hibernation sleep at the time to negotiate as a third party on behalf of the U.S.S. Enterprise 1701-D. Of course, the Sheliak are outraged but Picard severs the communication and gives the unyielding Sheliak time to reconsider. Three weeks to evacuate the human creatures or six months, which do you think they chose?

It has been known for Captain James T. Kirk (TOS) to directly order Chekov to blow the U.S.S. Enterprise's enemy ships into smithereens. The captain's defense strategies for cheating death are legendary throughout the galaxy featuring the destruction of the U.S.S. Enterprise 1701 using her auto destruct system to prevent the ship from being captured by Commander Kruge's boarding party. (The Search for Spock.) Starfleet command cadets have a strong desire to win and Kirk never likes to lose. He doesn't believe in the no-win scenario and has on several occasions ordered Mr Spock , Sulu and Mr Scott to warp the U.S.S. Enterprise 1701 out of danger. Its on record Kirk was unsuccessful in maintaining long term relationships with an unspecified amount of women. Due to the perks of command scantily clad women boldly seduced the captain inside and outside of his ships quarters which has forevermore earned him the reputation as a space stud. The United Federation of Planets charts over 8,000 light years of galactic space with a membership of over 150 planets and over 1,000 semi-automated colonies. Starfleet uses military force as a last resort because it belongs to a peaceful Federation of deep space exploration, however it has trained its graduates to defend Citizens of the Federation and render aid under the most severe conditions.

The Prime Directive (also known as General Order 1) is a basic component of Federation Policy which forbids Starfleet operatives and starships from interfering with the natural evolution of any society or civilisation. This directive is more important than the protection of spaceships or members of Starfleet. Losses are tolerated as long as they are necessary in order to observe this directive." Despite this, Starfleet Captains are skilled in interstellar Combat strategies and defensive maneuvers should an inevitable conflict with an adversary arise. Its interesting to note Starfleet sanctioned the invasion of the planet Organia in essence breaking its own Prime Directive. 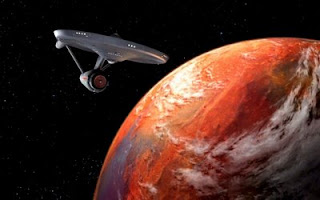 Its all happening in 2009 trekkies so grab your communicators and spread the word because heres whats available in current releases and upcoming Star Trek Blu-ray dvd sets. Mogie peeked my interest in Deep Space nine and Voyager which have'nt been released so far.

Update: The second release of Star Trek's TOS Blu-ray DVD boxset has those little furry varmints roaming the universe in season 2 saved on disc 4. If you like tribbles, this boxset has it all with the popular TOS "The Trouble with Tribbles," TAS "More Tribbles More Troubles," and DS9's interlaced episode "Trials and Tribble-ations."


Stay clued for Paramount/CBS announcements at Comic Con, about Star Trek movie scoops and news releases with new Trek merchandise and Star Trek stars drawing in oceans of eager fans beaming in from accross the universe. Are you eager to discover Star Treks favorite moments and what your superheroes look like on blu-ray HD dvd? If you've got the extra cash, why not go on a trekkie splurge. You know you want to. Anyone can join Amazon.com for notifications about new products which is a handy way to informed and order what you want.