Hi Trekkies, Did you find any of these awesome Star Trek books under your christmas tree? In case you were disappointed, I've decided to add some sparkle to your Star Trek Universe with these all time favorites of mine. 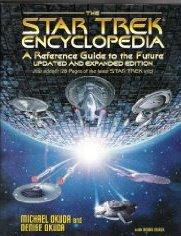 I can't imagine being a die-hard Trekker without this book: the ultimate reference to people, places, things, events in the entire Star Trek universe from the original series of 1966 through all the movies and series right up to Voyager. I think I know a lot about Star Trek, but oh my lord! This is THE reference book for fans. It literally has EVERYTHING. Covers planets and stars, aliens, starships, characters, baseball cards, scientific terms, inside gags, YOU NAME IT! It is astounding how much work and effort must have gone into this book. The book itself is beautiful. It is illustrated with color pictures from the show and technical illustrations done by the authors. The pages are glossy and laid out beautifully. It also serves as an episode guide, covering up through the release of "Star Trek: Insurrection".

What a wonderful labor of love this book is. It is very entertaining and informative, and a must have for any fan of the series. 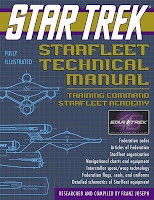 A must-read for every Star Trek fan.
Franz Joseph's STAR FLEET TECHNICAL MANUAL includes many design elements that might raise questions in the minds of Star Trek fans. Is the Enterprise's bridge really rotated 36 degrees off the ship's centerline? Does the Federation really have a starship with three warp nacelles? Is Starfleet's shuttle craft really too small to allow its occupants to stand up and walk around?

The vessels portrayed in Ships of the Line cover the length and breadth of the Star Trek universe. Arranged chronologically, from the earliest warp vessels to the futuristic Enterprise-J and darn near everything in between, this is a book you'll never tire of looking at.

Images of the U.S.S. Enterprise dominate this collection but there are also wonderful representations of plenty of other Starfleet ships, as well as vessels associated with both friends and foes.

The variety of images is fantastic. Battle shots, alien landscapes, illustrations depicting the wonders of the universe and images that commemorate some of Star Trek's most memorable moments can all be found within the pages of Ships of the Line.

If you're a TNG Trekker then you'll just soak up all the information about life aboard the USS Enterprise NCC 1701-D. This book covers Warp Drive, Turbolifts, Bio-beds in the Sickbay, Tricorders, Hull Material and construction, Holodecks, impulse drive engines, phasers, facts about the Utopia Planitia shipyards, and even the system of addressing crew quarters and such. There is so much information here it's great.
The book also has footnotes throughout about different happenings on the set of StarTrek:TNG. It is well organised with diagrams and plans for many of the parts of the Enterprise. This really shows the planning which is put behind the world of Star Trek, and how they do their best to make sure the stories fit technical plausibility with cohesive adventures. 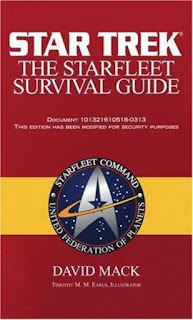 I used to have a very simple definition of a textbook: a book that contains a great deal of factual information, but puts you to sleep while attempting to absorb it. This totally fails to meet the second criteria (unlike, for instance, the TNG Technical Manual).XD!!but it as to be said there are fantastical technical details in the TNG Manual. Essentially, this is a collection of Trek trivia, in terms of equipment, creatures, and medical techniques, from the shows. However, from the style it is written in one can clearly picture a Starfleet officer actually reading and using this Guide. The descriptions are very clear, concise and interesting. One of them - Section 1.11, "Surviving Atmospheric Re-entry in a Pressure Suit" - is downright compelling reading. The mental picture of each step is incredibly vivid and so involving, that one can actually feel worried when reading the fatal consequences of anything going wrong. This is a brilliant piece of writing and extremely entertaining. For someone starting to collect Trek trivia books and/or manuals, this is definitely the one to recommend buying first.

"A warrior fights to the death." That quote alone speaks volumes about "The Klingon Way." Star Trek Klingon for the Galactic Traveler is an excellent addition to your Star Trek library. Not long after reading through this book, I almost felt as if this were a real culture I was reading about. Some of the Star Trek "extras," as I like to call them are at best, expendable. That is not the case in this book. If you're even remotely interested in or intrigued by the Klingons, this book is worth the price. My only complaint as with other Star Trek "extras," is that it's peppered with black & white photos. Thank you very much to the author for this one. 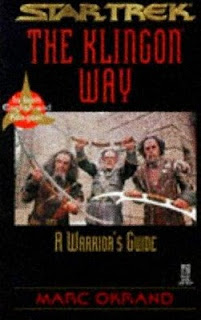 This is the ultimate Klingon book! It brilliantly weaves the tapestry of Star Trek's Klingon history through to its publication date in May of 1996. It is written both in English & Klingon. The photos are black & white. *GROAN* Each page contains a quote in both languages with a detailed explanation of the Klingon terminology. If you have not picked this up for your Star Trek collection, let me quote a Klingon phrase for you, "qoH vuvbe' SuS" ("The wind does not respect a fool"). If you can still find a copy of this, enjoy it! 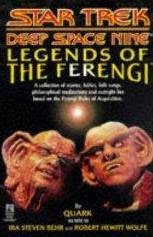 "Legends of the Ferengi" is a hilarious spoof on fairy tales and folklore anthologies. This book is a fascinating read for folklorists with dozens of in-jokes that had me literally doubled over with laughter. In the DS9 episode "Rules of Acquisition," the Ferengi Pel claims to know all 285 Rules of Acquisition plus the commentaries. This book gives you some of those commentaries --- at least, for the 70 Rules that were actually revealed on the series. The authors, Ira Behr and Robert Wolfe, wrote most of the DS9 Ferengi episodes. Now they give you the story behind each of the Rules, including #113, the "Rule that dare not speak its name."

You will also learn the first two words that any Ferengi learns in the Hew-Mon language ("No refunds"), The ten most famous insults in Ferengi history (see p.32) and the story of the infamous villain Drek, M.H.N.L.I.I. (May His Name Live In Infamy), who actually cut his prices and gave his customers BARGAINS, thereby causing the Ferengi economy to crash. Which is one reason why every Ferengi child is duly warned about the dangers of Real Life through supernatural horror stories about that bogeyman of bogeymen -- the Smiling Partner! And so on. I thoroughly enjoyed this book, which has lots of great B&W stills from the series, too. Drek was right --- some things really ARE bargains! 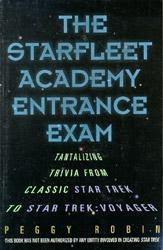 How well do you know your Star Trek legend, lore, and heritage? For nearly thirty years and through four different television shows and several major motion pictures, a complete galaxy of Star Trek characters, facts, figures, and stories have been spun to the delight of millions of viewers and dedicated fans,

More than just a trivia book, The Starfleet Academy Entrance Exam is a series of tests of your knowledge of classic Star Trek, Star Trek: The Next Generation, Star Trek: Deep Space Nine, and Star Trek: Voyager.

Tests are organized into thematic categories, such as:
- Aliens
- Captains
- Engineering
- Gadgets and Weapons
- Love and Romance
- Medicine, Health, and Bioengineering
- Quotations
- Space Ships and Other Vessels
and many more

Basically just another trivia quiz book, this one adds one thing to the mix: a collection of Top Ten lists and similar examples of Star Trek "humor." 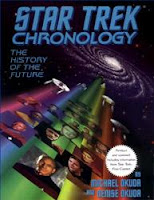 10. Star Trek Chronology -- the History of the Future (Paperback)

The authors of this book certainly had a daunting task, namely to put all of the events in Star Trek: The Original Series, the first six Star Trek feature films and the first five years of Star Trek: The Next Generation in chronological order. TNG has seven seasons, so stay clued. Some of the events are mentioned only on passing in episodes, yet they have managed to tie all of it together into a surprisingly coherent whole.
There are of course places where a consistent chronology is just not possible, and those situations are identified as such. Nevertheless, if you are a fan of Star Trek and are interested in what happened when, then I recommend this book to any true Star Trek fans!