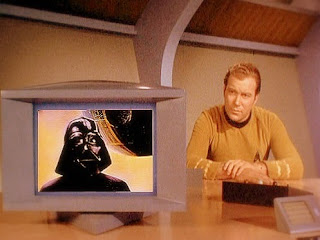 Captain Kirk: When Scotty swings the Enterprise around Lord Vader, I'm going to blast you out of the stars. There'll be No surrender, just space dust.

Darth Vader: I find your lack of faith most disturbing.

Captain Kirk: Spare me the double talk Vader, when the Enterprise weapons take out your rebels, you won't have a prayer.

Darth Vader: I warn you Kirk, Don't play with the powers from the darkside. Any offensive strike made against my starship by your Starfleet militants would yield fruitless results against the most powerful force in the universe. Come join me Kirk! Together we will govern the stars and overthrow the swaggering despot Federation of Planets.

Spock: Ready. He is quite mad is'nt he? Captain, I feel it necessary to point out the odds of the USS Enterprise surviving the firey deathrays of Lord Vader's star destroyer.

Captain Kirk: Damn it Spock!! Not now!! (Kirk thumps his fist on the communications console.)

Darth Vader: Listen to your man Kirk. Don't become too proud of the USS Enterprise's technological superiority, it will become your undoing Captain.

Captain Kirk: Don't try to frighten me with your warlock ways, Lord Vader. Your sad dedication to that darkside magic won't save you now. We've got phasers, photon torpedoes and a doomsday weapon.

How does it end?