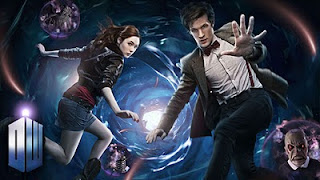 Who is Dr Who? Dr Who is the scientific whiz that became a legendary timelord success. Lets look at the facts. We know Dr Who survived the Great Time War with the help of his telepathic Tardis and has been shooting through time and space for hundreds of years in several different bodies! Can you unlock the Tardis traveller's secret mysteries?


1. What does T.A.R.D.I.S. Stand for?
2. How old is the Tardis?
3. Name the location the Time Rotor?
4. What does the Tardis look like?
5. What does "Dimensionally Transcendental" mean?
6. How many bodies has Dr Who had?
7. What is the name of the Doctors destroyed home planet?
8. What could'nt the doctor do without the Tardis?
9. How is the T.A.R.D.I.S. sent through time, dematerialising from one place and re-energizing in another?
10. Which regeneration of the Doctor met the Sycorax?
11. What did Rose use to defeat the Daleks and destroy their emperor?
12. Who was the Greatest Leader of the Time Lords?
13. What power lies at he heart of the T.A.R.D.I.S.?
14. How are tardises constructed?
15. What did the third doctor call the Tardis?
16. What type of ship is the tardis?
17. What allows the TARDIS to change its appearance?
18. Where does the main energy source for the TARDIS come from and what is it?
19. Who Hitch-Hiked on the side of the Tardis and to where?
20. When the Tardis is in flight, what happens to the Time Rotor?
21. Who discovered the great secret of space time travel?
22. Who did the greatest Timelord work with to harness the power of a black hole into a source of unimaginable power?
23. What did the First Doctor call the Tardis?
24. What is Dr Who's favorite signature Gizmo?
25. What TimeLord technology was used to defeat the Daleks during the Great Time War? 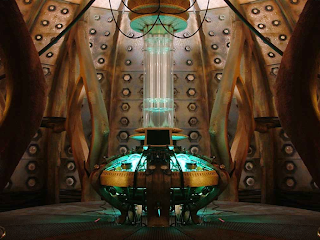 1. Time And Relative Dimension in Space.
2. Over 900 years.
3. In the glass column on the console.
4. A blue police telephone box.
5. Its bigger on the inside than it appears on the outside.
6. Dr Who has regenerated his mind and soul into eleven different entities.
7. Doctor Who survived the destruction of his home planet Gallifrey after the Great Time War aboard his cosmic friend, T.A.R.D.I.S.
8. Doctor Who could'nt survive without the Tardis which regenerates his alien bodies. Its his best friend in time and space. Together they've roamed the universe for hundreds of years.
9. The doctor programmes the flight computer with coordinates sending the Tardis travelling to anywhere in space and time, usually through a time vortex.
10. The tenth doctor met the Sycorax. The Tardis was beamed aboard the alien's ship while the doctor was recovering from his regeneration.
11. The Time Vortex.
12. Rassilon was the greatest leader of the Time Lords.
13. At the heart of the TARDIS lies the deadly power of the Time Vortex itself.
14. Tardises are unlike other time machines. The physical components of the Tardis are a secret Timelord mystery centuries old. We do know Tardises are grown, telepathic entities and are in effect alive.
15. The third doctor called the Tardis "Old girl".
16. Doctor Who's spaceship is a Type 40 Time Travel Capsule.
17. The chameleon circuit allows the Tardis to blend into its surroundings wherever it lands, however its been broken for a long time!
18. The main energy source for the Tardis is carried through a direct link from the Artron energy in the Eye of the Harmony, an artificial black hole created by the Time Lords.
19. Captain Jack hitch-hiked and flew all the way to the end of the universe to the year one hundred trillion.
20. The Time Rotor is at the very heart of the Tardis console which lights up and moves when the Tardis is in flight.
21. Time Lord Rassilon.
22. Rassilon worked with a stellar engineer called Omega.
23. The First Doctor called the T.A.R.D.I.S. his ship.
24. Doctor Who is the proud possessor of his very own Sonic Screwdriver which he carries everywhere.
25. Tardis technology was developed to create a Genesis Ark, a time capsule which was used to imprison thousands of Daleks during the Great Time War.

Live Long and Prosper......Trekkies and Trekkers. 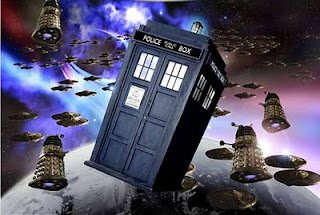 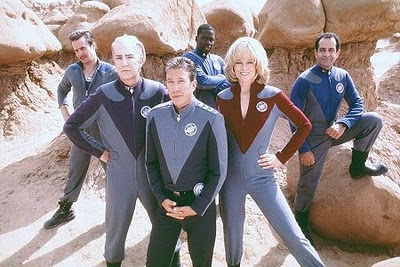 Galaxy Quest's movie is a clever spoof of Star Trek TOS Tv series which has Tim Allen starring as the head honcho and leading star of the starship NSEA Protector powered by a beryllium sphere for four faithful years. Then the unthinkable happens. The plug is pulled on Allens "Galaxy Quest" sci-fi show with his washed up crew mates reluctantly carrying out their duty before the ever faithful fans at sci fi conventions seventeen years later.

The galant crew of the starship NSEA Protector, Tawny Madison, Dr Lazarus, Tech Sgt Chen and Lieutenant Laredo, starring Sigourney Weaver, Alan Rickman, Tony Shalhoub and Daryl Mitchell, finally reach breaking point with their "brave" commander's "Jason Nesmith" antics whose been hogging the spotlight at their expense for ages. If you want some good entertainment I highly recommend Galaxy Quest. Its just pure good fun to watch. Tawny Madison has the weirdest job of all repeating the computer which only obeys commands given by her!

The stars consider cutting their losses and hanging up their uniforms for good except for Captain Nesmith who just isn't having any of it. Eventually Nesmith is approached by a race of aliens claiming to be "Thermians" led by "Mathesar" whose completely clueless about "Galaxy Quest's TV show." The Thermians beam Allen and his cranky fellow actors aboard their spaceship to negotiate and battle the reptilian warlord Sarris.

Guy Fleegman "Roc" Ingersol gate crashes the fans at a trekkie convention and re-lives the old times as the "redshirt" extra "No 6" with the crew of the Galaxy Quest. Roc starred in their 1982 episode and never quite got over being iced before the first commercial. His reasoning is simple! "ROC" wants his photos signed by the fans too! Redshirt Roc strikes it big when the Thermians beam him up, granting him the opportunity to take part in the real crew's space aventures aboard a "real life" version of the Galaxy Quest spaceship.

Unfortunately for Mathesar, he craves Nesmith's help and doesn't realise that earth's "Galaxy Quest" is just a cancelled TV Show. Every Sci Fi fan who's been curious about the merits of Science Fiction will get a good chuckle out of this film with the actors seriously conflicted and squabling over their real world "historical documents", the evil villain Saris and the fallout for the rest of the Galaxy. But hey, you've got to admire their unique solidarity. Never Give Up, Never Surrender, Activate the resonance scan and full speed ahead!

Live Long and Prosper, Trekkies and Trekkers.
Posted by SpacerGuy at July 05, 2010 2 comments: