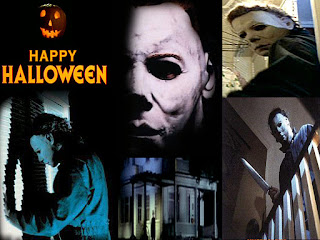 Its that time of the year again Trekkies for our cheery eyed spooks to call around the neighbourhood trick or treating. Well assimilate this. Feast your eyes on these creepy masks, Spooky huh? Do you recognise him? The story goes Michael Myer's white legendary face is actually modelled on the death mask of Star Trek's Captain James T. Kirk.

But is it true? Rumour has it on YouTube that this is the real deal. William Shatner remembers buying a Myers mask for Halloween when taking his kids out trick or treating but lets be clears about this. The Michael Myers mask in question is obviously an altered Captain Kirk mask.

Shatman's obviously getting a kick out of reliving this fond halloween experience with his daughter Elizabeth, who joins in on the fun. Mr Shatner's 'death mask' was originally made for an episode of Star Trek which eventually found its way into the classic horror movie Halloween. The fun part is Mr Shatner went trick or treating in his own face mask!

What do you think?

Live Long and Prosper, trekker or treaters
Posted by SpacerGuy at October 31, 2011 5 comments: 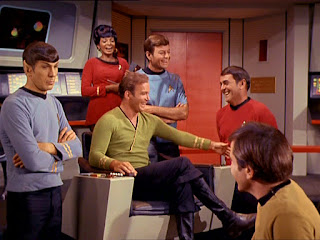 Did you know that the US Navy, the US Airforce and NASA have all studied the USS Enterprise NCC 1701's bridge as a futuristic model for a hightech command centre? In 1994 DARPA, the Defense Advanced Research Project Administration contacted Star Trek designer Herman Zimmerman and asked him to help them create an experimental control center based on the USS Enterprise NCC 1701 bridge. This project was deemed of such importance it was given a really cool codename.


Which Trek Codename did they use for the Enterprise Darpa project? 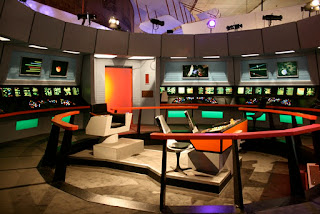 Heres TOS Enterprise bridge on full display at Star Treks: The Exhibition at Detroits Science Center. Isn't it a thing of beauty?

Live long and prosper trekkers and trekkies!
Posted by SpacerGuy at October 09, 2011 6 comments: