Get ready to satisfy your trek desires, Trekkies, with Mr Abrams in the driving seat calling the shots for Star Trek 2 (2013). In his interview update to TrekMovie, Bad Robot director, JJ Abram's lieutenants are clearly warping ahead with the cosmic art of filming Star Trek 2, boldly going to strange (less) new worlds. Apparently the USS Enterprise fledglings have all enlisted and are all set to sail around the galaxy, minus a few Federation planets and TOS crew on May 17, 2013.
I think its a real tragedy Romulus and Vulcan are space dust. In the old days trekkies used to love nitpicking Star Trek's epic story lines to death because trek lifeforms have no fear in boldly exploring the cosmic bounties within our trek universe. Its what we were born to do. Its great seeing our heroes slugging it out with alien aggressors because deep down we admire their gut instincts, courage and integrity to challenge adversity in all shapes and forms. 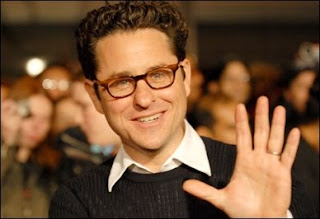 Fearless warrior Klingons can always be relied upon to spice up the Federations ageing constitution with bat'leth combat, space fights and dramatic deaths. The trouble is Praxis is now running out of air, so time is running out. I hope this hasn't consigned our Klingon friends to the destitute aliens rubbish heap. I feel I must protest at this critical hour and defend Star Trek's good old days. Its a totally rubbish deal Klingons, Vulcans and Romulans have got in Star Trek 2009 and Star Trek VI. But it could be worse... I guess.

Klingons could be part of a completely byegone era too. I figure Mr Abrams has a chance to redeem himself. Make the Klingons the tip of the spear again, yeah. Who else does what they do? Infuse Klingon culture with hardcore diehards ready to leap into the firey abyss of battle. Mr Spocks duel in Amok Time is a perfect battle scene in point. Why not feature some interesting Klingon battle/character moments amidst a wonderful backdrop of Klingon scenery in Star Trek's continuum? 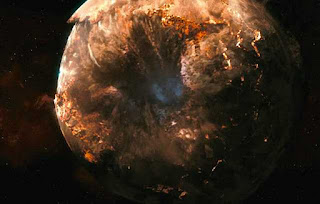 Abrams writers like blowing up the natives on their soverign home worlds. The GOOD news is Director JJ will be shooting Star Trek 2 (THE SEQUEL) in 2D using an IMAX filming format so he can convert the film presumably to 3D! which sounds promising because it gives directors and viewers a much larger field of vision enhancing the movie cinema experience when viewed in 3D.
Director J.J. Abrams is the preferred choice with a proven track record. (until his luck changes like Rick Bermans) in 2002 with Nemesis receiving a poor turnout at the cinemas. According to Boxoffice Mojo Star Trek 2009 scooped $385,680,446. million worldwide for Paramount's studio executives. Not bad considering treks previous incarnation failed to achieve warp speed with only $43,254,409 to renergize Captain Picard's Galaxy class flagship. The good news is Director Abrams has hopefully learned from Star Trek 2009 mistakes 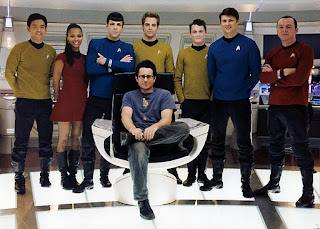 According to Abrams on TrekMovie 'It’s a little early to be talking about ‘Star Trek,’ but I will say that they wrote — the three writers, Damon [Lindelof], Bob [Orci] and Alex [Kurtzman] — they wrote the most amazing script, and I’m thrilled to get a chance to direct it. It’s totally mine to screw up, so if you don’t like it, it’s completely on me. Our sets are almost done, so we’re going to go back and start shooting next month.'
Images Owner/Creator: Paramount Pictures and or CBS Studios.
Now immerse yourself with the celestial fact that Star Trek 2009 (the prequel) is probably the most compelling, action packed, most successful, and most expensive trek movie the world has ever seen, which is no small feat. Its true Gene Roddenberry's peaceful, dynamic, Universe was revamped with a new crew at the helm of the USS Enterprise NCC-1701. Star Trek 2009 is now set ten years prior to the original series and everything we know and love is not guaranteed to happen the same way again. Young Spock booting cadet Kirk out the airlock was highly unusual and Kirk's promotion to captain later on? Still at least Uhura's undressing made a lasting impression but then Kirk's heavy breathing has to go and spoil the fun, LOL. I thought Kirk had a pretty good hiding place and view from where Galia had stashed him away.
Lt. Nyota Uhura: Gaila, who is he?
Gaila: Who?
Lt. Nyota Uhura: The mouth-breather hiding under your bed?
James T. Kirk: You can hear me breathing?
Merry Christmas, trekkies and trekkers.
Posted by SpacerGuy at December 23, 2011 7 comments: