Trekmovie has 2 beautiful location shots up on their website with Uhura, Spock and Benedict in action movie scenes! If you're saving yourself for 'Star Trek 2' 2013 then RED ALERT. The following contains SPOILERS. 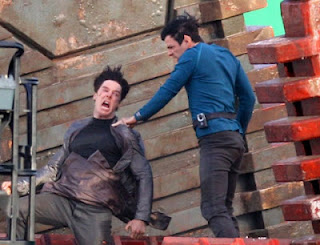 JJ Abram's second trek sequel is currently shooting on location in Los Angles. So whats new? The first image shows Zachary Quinto aka Mr Spock and Benedict Cumberbatch (mysterious villain) at odds battling it out. In this shot the sneaky vulcan's Neck Pinch puts Cumberbatch on his knees begging for mercy. LOL. Perhaps Spock is getting even for losing one of his logical arguments?

Who do you think is going to win? 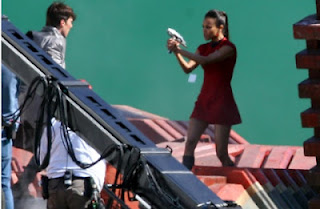 In the second shot Uhura holds Cumberbatch at gunpoint with a phaser pointing at his head. Curiously Cumberbatch's got no points on his ears which rules out the Romulan and Vulcan angle.

The Enterprise's Communications Officer hangs tough with this baddie which buys Spock some time at least to complete his secret mission? The question is whats 'Cumberbatch' hiding that affects Uhura and Spock so badly? or the fate of the Federation? Apparently Uhura and Spock are on a 'Space Barge Set' so maybe the duo will call in for some Enterprise Redshirt reinforcements.

Quote and Images courtesy of Trekmovie. Thanks Trekmovie!

Its great seeing Uhura getting in on the action and kicking some villainous butt but has she got the nerves to blow 'Benedict' away?

'I can maybe tell you what I’d like to see happen in Star Trek…for Spock and Uhura to really hook up – for Uhura to get to do whatever physical activities, kick some butt, some Romulan butt.'

I rather enjoy listening to Commander Data's wonderful recital of 'Ode to Spot' who wrote it in honor of his cat. I think pet lovers in particular will get a good chuckle out of this episode of TNG 'Schisms' because its just hilarious. The poem itself exposes Spots natural behavioural habits and the personal relationship the creature has with its owner, Data who has come to consider Spot as a true and valued friend.
Tell me, after listening to Data's Ode to Spot, how does your emotional state of mind feel? 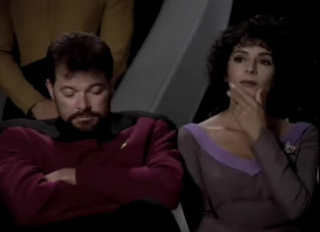 Image Owner/Creator: Paramount Pictures and or CBS Studios.
Felis Cattus, is your taxonomic nomenclature,
an endothermic quadruped carnivorous by nature?
Your visual, olfactory and auditory senses
contribute to your hunting skills, and natural defenses.
I find myself intrigued by your subvocal oscillations,
a singular development of cat communications
that obviates your basic hedonistic predilection
for a rhythmic stroking of your fur, to demonstrate affection.
A tail is quite essential for your acrobatic talents;
you would not be so agile if you lacked its counterbalance.
And when not being utilized to aide in locomotion,
it often serves to illustrate the state of your emotion.
O Spot, the complex levels of behaviour you display
connote a fairly well-developed cognitive array.
And though you are not sentient, Spot, and do not comprehend,
I nonetheless consider you a true and valued friend. 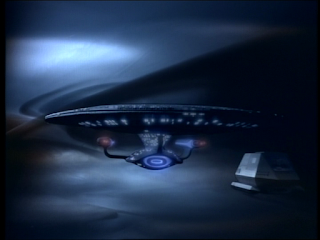 Star Trek TNG's 'IN THEORY' unfolds around the Mar Obscura Nebula. Datas deduces the dark matter Nebula creates gaps affecting real space and causing the USS Enterprise NCC 1701-D to phase in and out of the space time continuum.
The question for the Enterprise crew is how do they navigate past time shifting pockets hitting the ship?
Mr Data agrees to reconfigure 'the sensors' to detect the anomalies at extremely close range with a shuttle craft 'steering' the bulk of the Enterprise through the tricky cloud.
At last Picard wants an away mission sidelining Riker on the bridge! Jean Luc pilots the shuttle craft on its new course saving his crew and starship from danger. 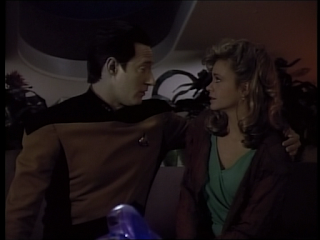 The hilarious aspect of 'In Theory' is Jenna's and Data's relationship. Commander Data's mission to understand human intimacy proves to be one of the androids greatest tests when he pursues a romantic relationship. Security Officer Jenna D'Sora is seduced by the emotionless technology of the USS Enterprise-D's android.
As time passes Jenna, a fully fledged woman, wants to experience real love and passion... It gets even better when Mr Data runs a love programme. Jenna isn't amused when she realises the androids devotions are also totally focused on running the Enterprise instead of her. 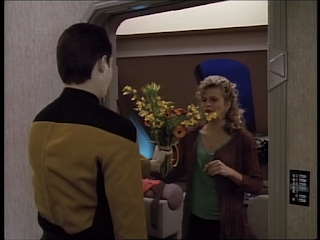 The big moment arrives when the lovebirds kiss. A satisfied Jenna looks directly at Data fluttering her wide eyelashes and speaks.
Image Owner/Creator: Paramount Pictures and or CBS Studios.
'What were you just thinking?' Pause for a moment and try to imagine Commander Data sparing his girlfriends feelings! Not Data, IMPOSSIBLE! In his androidlike way, he blurt out the fatal and absolute truth.
'In that particular moment I was reconfiguring the warp field parameters, analysing the collective works of Charles Dickens, calculating the maximum pressure I could safely apply to your lips, considering a new food supplement for Spot... 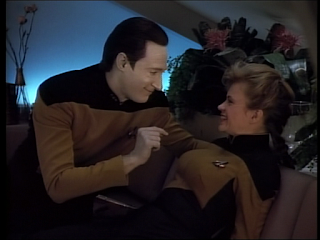 'Oh well, I'm glad I was in there somewhere.'
Later on Jenna's faces tin man head on. Its the critical hour for Jenna and Data but its not over, just yet. Tin man has a few more surprises up his sleeve.
Jenna: 'You were so kind and attentive, I thought that would be enough!'
Data: 'Is it not?'
Jenna: 'No, it's not. Because as close as we are, I don't really matter to you. Not really. Nothing I could do or say will ever make you happy, or hurt you, or touch you in any way.'
Data: 'That is... a valid projection.' Data reflects. 'It is apparent that my reach has exceeded my grasp in this particular area. I am perhaps not nearly so human as I aspire to become...If you are ready to eat, I will bring our meal.
Data stands. Jenna just looks at him sadly.
Jenna: 'I'd better go, Data.
Data: 'If you wish. Jenna. Are we no longer... a couple?
Jena 'No... we're not.'
Data: 'Then I will delete the appropriate program.' :( 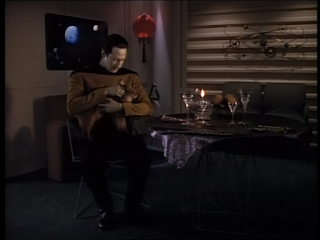 What did you think of Michele Scarabelli and Brent Spiner performances in this episode of Star Trek?
Enjoy your Star Trekking, Trekkies.
Posted by SpacerGuy at February 10, 2012 4 comments:

Great Music universally affects our logical frame of mind putting us in a good mood. I love the lyrics and harmony in the Vulcan Anthem "Live Long and Prosper" because its so emotionally uplifting. When you listen, you might also want to see the song as a story. What I can't figure out is why Uhura isn't here singing with Mr Spock playing the vulcan harp? I guess our Enterprise pals are too busy... hiding somewhere.... I've added the lyrics so you can join in the fun and sing along.
Enjoy your Star Trekking, Trekkers. 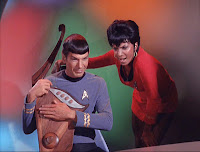