Uhura's got a Gun

Heres the Enterprise code cracker, Uhura, doesn't she look hot enough to fire up your warp engines? The odds are encouraging that Enterprise hailing frequencies go down in J.J. Abrams Star Trek sequel. The yellow hue from the mystery deflector dish tells us something about Uhura's proximity to darkness in this exact location.  Specializing in xenolinguistics, Uhura grabs the top Communications job in Pikes ship (2009) when the guy with the ears tries to sideline her to the USS Farragut. Nyota tells Spock where to get off.

UHURA: Commander, a word.
SPOCK: Yes, Lieutenant?
UHURA: Was I not one of your top students?
SPOCK: Indeed you were.
UHURA: And did I not, on multiple occassions, demonstrate exceptional aural sensitivity, and I quote, "an unparalleled ability to identify sonic anomalies in subspace transmission tests?"
SPOCK: Consistently, yes.
UHURA: And while you were well aware that of own qualified desires to serve on the USS Enterprise, I'm assigned to the Farragut?
SPOCK: It was an attempt to avoid the appearance of favoritism.
UHURA: No, I'm assigned to the Enterprise. (Spock presses some buttons on his PADD)
SPOCK: Yes, I believe you are.
UHURA: Thank you. 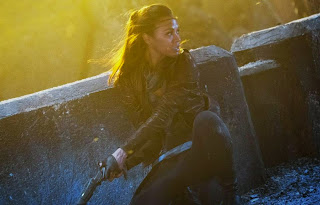 Later we see these two kissing each other in the turbo lift. Funny how Uhura kept her first name quiet for so long but I guess Nyota likes to play mind games. I've been doing a little digging on our Communications Officer and it gets better. Uhura is proficient in a whopping 83% of official Federation languages and regional dialects and becomes Vice President of starfleet academy's Chorale Ensemble which is like pretty interstellar amazing.

Here in the photoshoot is Uhura crouched, holding a phaser on the set of Star Trek Into Darkness with the plot unfolding just a little. Interesting I'd say because, 'John Harrison' swoops down and engages in mortal combat with the hooded mysterious entity. Now who could this be I wonder, eh? In the same spot, it would appear Nyota is lying in wait for something..... Cumberbatch's evil entity? Its Red Alert, Could this be pay back time? Uhura looks like a predator ready to exact retribution but for what......for SPOCK???? We still don't know if Spock makes it out of the volcano. John Harrison vs Uhura hmm... So I ask you... How will Uhura get John Harrison to repent for his evil ways?....Does she really have what it takes to pull the trigger?

Explore long and Prosper, Trekkies and Trekkers!
Posted by SpacerGuy at February 25, 2013 6 comments: 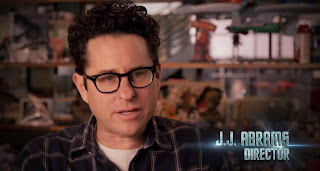 The plot and the villain are still a mystery but judging from the latest news, a trully fascinating storyline is emerging. Apparently movie fans don't have to watch Star Trek's classic series to understand Star Trek Into Darkness which is my take on what Abram's has said so far.

J.J.Abrams: The goal for this movie was to up the ante as much as we could. There were a lot of characters people were anticipating seeing, Kirk, Spock, Bones, Scotty, Uhura, Chekov and Sulu. I am more excited than I can tell you.The action and scale of this movie is lightyears beyond what we did in the first movie

Zachary Quinto: It was Pretty magical to see what they were able to create this time. I think its stunningly beautiful.

Zoe Saldana: This is the kind of film that 3D is made for.

J.J.Abrams: Without question Imax and the 3D of it I think, will give viewers another level of execitement. This movie was the most fun and challenging experience that I've had. This is my everything I've ever done wrapped up in one movie.


What can we expect from Star Trek Into Darkness?

1. Klingon ships chasing Earth's Federation ships equipped for glorious battle action in space. Red Alert!
2. The movies antagonist, Khan and the captain of the USS Enterprise NCC 1701, James Kirk engaged in battle
3. Scotty hanging on yelling, beam me up Keenser!
4. John Harrison beating the spuds out of someone aboard a spacehip.
5. Hand to hand scrapping between Harrison and Kirk.
6. Cumberbatch is the threat leading them into a trap to 'a war zone world.
7.terrific conflicts and ripping explosions aboard starships claiming lives during the line of duty.
8. A storyline with action and a villain, bigger than the last movie.
9. Unstoppable terror detonating the fleetleaving Earth and her citizens in ruins, running and ducking for cover.
10. What do you think of the blue alien lifeform?

Trek Long Into Darkness, Trekkies and Trekkers.
Posted by SpacerGuy at February 18, 2013 9 comments:

Star Trek Into Darkness is bringing war to the streets of earth with John Harrison whom we suspected was Khan. Forget about Optimism. Hope for the future is long gone! Well, well.... what about its not all over.... wails the devoted trekkie fan. "


Look no further than the Baftas, Alice Eve has denied Cumberbatch is playing Khan which spoils the fun, really. Maybe shes hiding something! Its funny when she says J.J. Abrams has become the ultimate geek hero! So get ready to ship out to the next universe, you know the dark one! Star Trek Into Darkness is romancing fans with life and death.


In the wake of a shocking act of terror from within their own organization, the crew of The Enterprise is called back home to Earth. In defiance of regulations and with a personal score to settle, Captain Kirk leads his crew on a manhunt to capture an unstoppable force of destruction and bring those responsible to justice. As our heroes are propelled into an epic chess game of life and death, love will be challenged, friendships will be torn apart, and sacrifices must be made for the only family Kirk has left: his crew.


The villain, Cumberbatch has been  described as a terrorist, a member of Starfleet on a mission leaving behind a trail of destruction.

So who is John Harrison, I mean REALLY? In order to figure this one out, we must eliminate the impossible, whatever remains, however improbable, must be the truth. Alice Eve playing Dr Carol Marcus gives us clueless trekkers something to sink our teeth into. Shes Captain Kirk's ex-sweetheart in the Wrath of Khan. So why is Abrams bringing a Federation Molecular biologist into the movie? Lets not forget her boy, David Marcus the scientist, who played with protomatter and developed a Doomsday Weapon with dear ol' mom, Carol, on Spacelab Regula 1. So perhaps... Cumberbatch playing Khan-type character makes sence after all! There! by Jumping Jupiter I've cracked it. If you've got any better theories..... speak up darn it, or I'll send McCoy after you!


You'll be glad to hear, Keenser, Scotty's alien side kick is coming back! Remember him?

Treks Into Darkness villainous mysteries just keep getting deeper and deeper. Its self evident John Harrison is the smokescreen. We know Benedict Cumberbatch's villain is out for revenge but oddly, tells the grieving father he can save his sick daughter in the first 9 minutes of the movie. So no Khan, Alice Eve put that rumor to rest, finally? So who is Harrison? Aren't you scratching your head?

In the Super Bowl trailer Harrison says hes better at everything which is trektastic. To trip out some more lets warp ahead to 2267. Captain Kirk records a commendation for Harrison when the bridge of the Enterprise is slowly deprived of life support during Khan's takeover attempt. (Space Seed, TOS.) Yes you gotta love Star Trek lore, its so fascinatingly deep. Tellingly, Captain Kirk doesn't recognize "Harrison" in Star Trek Into Darkness movie trailer, which is weird but then the year is 2259 and so their paths haven't crossed until like now. Star Trek's Encyclopedia states Harrison is a Starfleet Crew Member aboard the original USS Enterprise NCC 1701 in 2267. So who is Cumberbatch's villain? I think this quote sums up treks mystery villain: I've found that evil usually triumphs...unless good is very, very careful.

For reading my entire into darkness rave, you deserve a super prize, LOL. Seriously, I'm really impressed and somehow Spacerguy will find a way to reward you!


Who do you think Benedict Cumberbatch is playing?  Is he Gary Seven, a Khan clone or a Moon Shuttle Conductor?


Khan: It is an illusion. A comforting lie told to protect you. Enjoy these final moments of peace. For I have returned to have my vengeance. So, shall we begin?

Pike: There's greatness in you, but there's not an ounce of humility. You think that you can't make mistakes, but there's going to come a moment when you realize you're wrong about that, and you're going to get yourself and everyone under your command killed.

Live Long and Prosper Trekkies and Trekkers!
Posted by SpacerGuy at February 11, 2013 8 comments:

Had me some trek fun over at Trekmovie recently. What do we call J.J. Abrams now? A little birdie tells me the Star Trek vs Star Wars debate is about to kick off again. I mean you've got to agree with Basements Bloggers logic right? Star Trek has the hotter chicks! 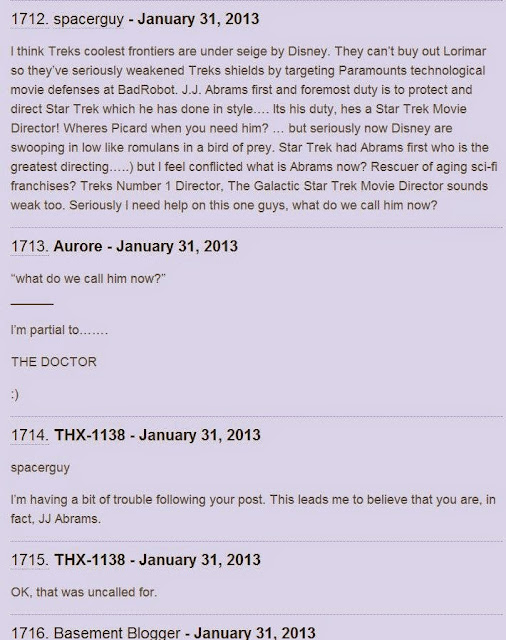 Okay, Star Wars makes much more money and it took our director. I could say Star Trek is smarter and argue that point but it occurred to me that the Star Trek films have it in spades over Star Wars in this one respect-
STAR TREK HAS THE HOTTER CHICKS. Let’s go over the evidence.
1. Star Trek: The Motion Picture- Hot woman- Ilia
2. Star Trek: The Wrath of Khan- Saavik; Dr. Carol Marcus for us old guys.
3. Star Trek: The Search for Spock- Saavik; Uhura
4. Star Trek: The Voyage Home- Gillian; Marine biology is sexy.
5. Star Trek: The Final Frontier- Caithlin Dar, Romulan Ambassador
6. Star Trek; The Undiscovered Country- Martia?! Lt. Valeris, hey she was Samantha on some show I never watched.
7. Star Trek: Generations: Dr. Beverly Crusher, love that close up.
8. Star Trek: First Contact- Troi, Lily
9. Star Trek: Insurrection- Anij; okay another hottie for us old guys
10. Star Trek: Nemesis- Commander Donatra, Troi, Dr. Crusher for us old guys.
11. Star Trek- Uhura, Gaila-really don’t need the green skin.
vs.
Star Wars-
Princess Leia in Return of Jedi. Star Wars had her with a goofy hairstyle. Was too involved with the story to really drool over Leia. But Return needs only two words. Metal bikini.
The other movies? Nothing. Unless you count that female Gungan in the robot army battle.
The conclusion. Star Trek has the hotter chicks. Star Trek wins. Star Trek wins.

Who's your wet dream sci-fi babe?