Holding Star Trek: The Original Series in remarkably high esteem, Jason Isaacs' initial reaction to being asked to appear in Star Trek: Discovery was to turn down the offer, adamant that he didn't want to participate in a horribly diluted version of the series that he respected so much.

"But then," he continued, "I set up a Skype, a slightly reluctant Skype, with these guys, and they had a great story to tell. They had a great character to play. And so, I shrugged off any of the yolk of the past and just jumped in to play this, to do this story."


So, all I meant was that I don't think about any of that stuff, because I couldn't go to work if I felt like the ghost of Bill Shatner and Patrick Stewart were breathing down my costume (laughter), and that there were 20 million people watching to see whether I cross my legs or press the left button or the right button.

Family is special. What are you doing this Christmas? Heres Wil Wheaton aka Wesley Crusher four days ago at a Star Wars movie! 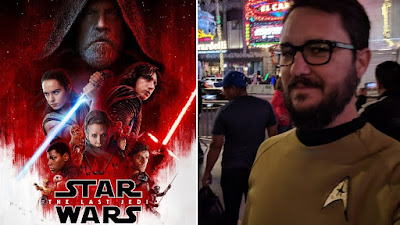 “I loved #TheLastJedi!,” Wheaton tweeted out after the premiere. “It hit all the right notes for me, and seeing it in the Chinese Theater, surrounded by my fellow nerds was glorious. The Force was with us.
“Oh, and I went in costume for the first time ever, because I am a damn adult and I get to decide what that means.”

Have you seen Star Wars the Last Jedi? Were you one of Jedi or the Sith? Did you wear your uniform? Spot any Trekkies hiding in the audience wearing a Starfleet uniform? Star Trek TNG Star Wil Wheaton did!

Live Long and Merry Christmas everyone

Mindful of this, J.J. Abrams and Paramount have agreed to Quentin Tarantino's viewpoint that the film be R-rated which the Pulp Fiction director pitched to them. So trekkers get set for plenty of excitement because coolness and R-rated films are Quentin Tarantino speciality! So how can the maestro of R rated films make Star Trek cool? Grittier action scenes which are fun to watch but Deadline and Screenrant have exclusives.

Star Trek: Discovery is be distributed almost everywhere in the world on Netflix, except for the US where it will be available on CBS All Access. The series is being broadcast by CBS Studios International on Netflix in 188 countries and in Canada on Bell Media's Space channel and OTT service CraveTV. 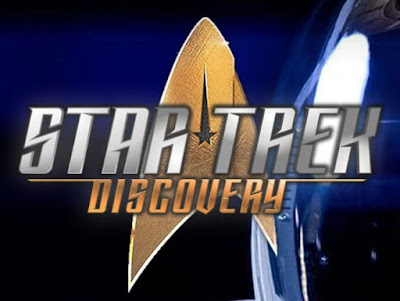 CBS have released a trailer for episode 10 of Discovery, "Despite Yourself," to get us excited for the series return, in January! So now heres the USS Discovery lost in space.....

All the wreckage apparently has something to offer, as they send a little workbee off to do something in it.

Showrunners Gretchen Berg and Aaron Harberts spoke to Indie Wire about many aspects of the series, including hinting at things to come. Berg acknowledged

the war will continue in Chapter 2. It’ll be in there for sure. The Klingon war is this crisis where Burnham was there when it set off and she feels responsible for setting off. That is her arc for Season 1, and that is what will be paying off by the end of the season.

But Harberts had more to add:


...the war is always alive and always a motivator, but we also really wanted to try to tell some stories that stop down from the war. And I think that Chapter 2 will open in a place where as much as the war is weighing on our characters’ minds, they’ve got a bigger problem to solve.

So trekkers, set your phasers on stun because next January we'll soon be warping ahead... lost in space..... Stay tuned for more Star Trek: Discovery news right here at Star Trek Space!!!

Live Long and Prosper!
Posted by SpacerGuy at December 04, 2017 6 comments: