Star Trek creators are trying to make a new Star Trek series that will appeal to audiences but are we losing something? Star Trek continuity is on shaky ground now. The technology and appearance of starships is far more advanced compared to any previous Star Trek shows. The ship is slick and shiny.... very high tech for a show 10 years before Captain Kirks USS Enterprise NCC 1701 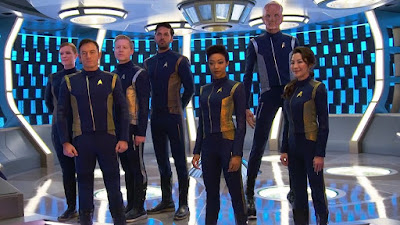 Okay so the Klingons really need to be intimidating and monstrous given scary is fun right? Lets face it, Star Trek Discovery is set a decade before the original series in which Klingons had smooth foreheads. So what if the special effects were crap in the 60's... 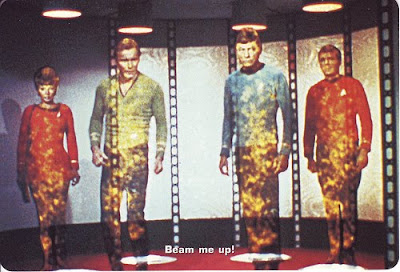 The change in appearance was explained in a story arc in Star Trek Enterprise and DS9. Some wanted to boldly go back where no fan had gone before, Roddenberry era. hating these storylines. The thing is lots of fans just accept that Star Trek's classic budget was restricted which did not allow for fancy Klingon prosthetics and costumes.

Wrong say other fans. We love the Klingon Star Trek Enterprise episodes! These episodes are brilliant but yet again continuity is been cancelled out by Star Trek's new Discovery series. ... with monsterous Klingons! Isn't this great! Creatures, we love monsters and War!


Set roughly ten years before the events of Star Trek: The Original Series,[1] the show sees the united Klingon houses in a war with the United Federation of Planets that involves the crew of the USS Discovery

So which side of the fence are you on?

Some say the only way to enjoy watching Star Trek Discovery is to pretend all the other Star Trek shows never ever happened, like wowsers! Can you believe that?  First, Star Trek Enterprise was blamed for ruining Star Trek, attacking Berman and Braga.

So will fans hate Star Trek Discovery for changing Star Trek's continuity, even more?. Others might love it for being completely different. Change is exciting right? Where do you stand?

Aren't you looking forward to boldly trekking out where no fan or klingon has gone before?

Heres a list of Star Trek Discoveries Season One, (1 to 15 below.) Which ones did you enjoy the most? CBS and Netflix have aired the Season 1 finale, Will You Take My Hand? So now, the TV Network CBS are promoting the new Star Trek series with After Trek, which some say is more popular than the show! Lots of promotion materials are available with Trekmovie pointing the way.

The Seasons, finale, Will You Take My Hand shows Georgiou at the helm planning to end the Klingon war once and for all,  now the USS Discovery crew struggles to fathom and tolerate her hostile tactics. You'll remember her No 1 has a special, unique way with words,....

Memories of past hardships are rekindled within Burnham.

The word for everyone watching Star Trek Discovery, Season 2 has already gone into production with the new cast on  26th April 2018. Have you tuned in for the fun yet? Which episode did you enjoy most? Will Captain Gabriel Lorca played by Jason Isaacs return?


Rate
Escaping from the brig while the ship is under attack, Burnham joins the captain in an audacious plan to end a battle rapidly escalating into war.


Rate
Burnham finds herself aboard the U.S.S. Discovery, where she quickly realizes things are not as they seem, including the mysterious Captain Gabriel Lorca.


S1, Ep4
The Butcher's Knife Cares Not for the Lamb's Cry


Rate
With tensions and stakes high as Starfleet continues in their efforts to end the war with Klingons, Burnham begins to settle in to her new position aboard the U.S.S. Discovery.


Rate
While on a mission, Lorca is captured by the Klingons and unexpectedly finds himself in the company of prisoner of war Starfleet Lieutenant Ash Tyler and notorious criminal Harry Mudd.


Rate
As the U.S.S. Discovery crew attempts to let loose at a party, an unwelcome visitor comes aboard bringing about a problematic and twisted sequence of events.


Rate
The U.S.S. Discovery is tasked with a high priority mission to the planet Pahvo and learn the science behind the Klingons' cloaking technology.


Rate
Bypassing Starfleet's orders, Lorca uses the USS Discovery crew's ultimate asset, the ship itself, in an effort to end the war with the Klingons once and for all.


Rate
While in unfamiliar territory, the U.S.S. Discovery crew is forced to get creative in their next efforts to survive opposing and unprecedented forces and return home.


Rate
Burnham heads to the ISS Charon with a special "gift" for the Emperor. With the help of an unexpected source, Stamets gains clarity while trapped inside the mycelial network. Saru asks for L'Rell's help.


Rate
Lorca plans to move forward with a coup against the Emperor, propelling Burnham to make a quick decision to save not only herself, but the U.S.S. Discovery.


Rate
Burnham and the crew are faced with the harsh reality of the war during their absence. In order to move forward, Starfleet must use unconventional tactics and sources to take their next action against the Klingons.


Rate
With Georgiou at the helm of the plan to end the Klingon war once and for all, the USS Discovery crew struggles to fathom and tolerate her hostile tactics. Memories of past hardships are rekindled within
Posted by SpacerGuy at May 21, 2018 5 comments: