Rene Auberjonois passed away at his Los Angeles home. He had metastatic lung cancer which his son Rèmy-Luc Auberjonois told the Guardian. Auberjonois' death was confirmed by spokespeople on his official Twitter account.


Since the news, numerous "Star Trek" actors have paid tribute to Auberjonois on social.media

Television delivered big success for Rene not forgetting his films  The Rockford Files to Grey’s Anatomy, Starsky and Hutch to Frasier, he was a regular on three popular and vastly different shows. Trekkers will remember him as Deep Space Nines Security Chief  "Constable" given him by Kira Nerys whom he investigated. Odo had little patience for flim flam wheeler dealers like Quark or criminals trying to pull a scam or break the rule of law, whom he usually caught out with ease by "shapeshifting" into the background. Easy for Odo who waited for his "prey" to make its move while boldly entertaining

Rene Auberjonois was great and as this video shows could laugh at himself.
Posted by SpacerGuy at December 12, 2019 10 comments:

Do you believe in Teleportation? 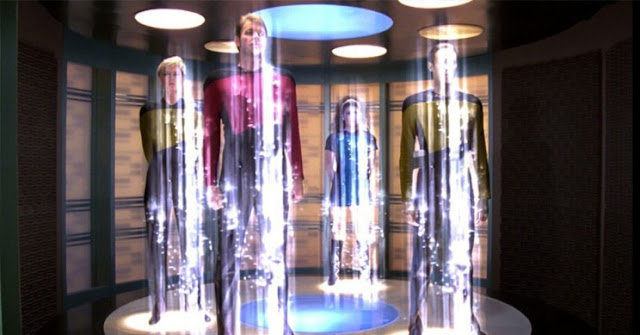 Teleportation events date back as far as 1593, October 24th. The phenomenon itself fascinated earthers of the time. It was Charles Fort who coined the phrase "teleportation." which described the transportation of a person or object from one place to another.

So what happened on that October day in 1593? Seriously, does anyone have a real clue?

One particular noteworthy case occurred involving witnesses and a uniformed imperial guard appearing in Plaza Mayor in Mexico City. It was all very mysterious indeed.

The person was recognised as a palace guard for the Governor in the Philippines capital, Manila, whom people recall looked dazed and confused. He materialized out of no-where in the bright light of day looking like something out of Star Trek. When the villagers asked him who he was, he identified himself as Gil Perez. However he explained, he didn't understand how he ended up where he was. All was not what it seemed. Well well, rumours spread fast, "have we got a deserter, here?"

Gil Perez recounted his teleportation experience which began when the Governor, Gomez Perez Demarinas gave the order to have his head taken off! Why? cried the villagers in disbelief. "I spoke ill words of the Governor, I'm was so sorry. There can be no forgiveness, he said!" The Governor was not someone to be crossed. it was game over for me!. The villagers gasped horrified.


The blood from previous executions stained the wooden deck upon which numerous headless victims got split craniums and fell, gushing before blood thirsty spectators visiting the castle by invitation of the Governor. Perez felt weak at his knees and sick to the stomach. He rubbed his neck before being forced to place his head on the block.

"No, way never, how can this be happening to be?" cried Perez begging for forgiveness. The block smelt awful. As a final insult to the condemned, the governor ordered the hooded executioner (who was a green alien with pointy ears) to use a blunt blade on Perez which added to the immense pain and suffering inflicted on victims. Perez screwed his eyes shut and hoped the axeman wouldn't botch the job as the blade cut through the air....

Later the Governor himself suffered an ill fate. Suffice to say no-one believed Gil Perez's story when he re-energized like Captain Kirk beaming down from the starship USS Enterprise NCC 1701 several days later in Plaza Mayor in Mexico City. But what really happened and who was the alien with pointy ears? No, instead Perez was arrested and chucked in jail as a deserter for abandoning his duty.

However upon close scrutiny his story actually held up. Years have passed but Records dating back to 1698 documenting this highly unlikely case were written by a religious historian. More witnesses testified that yes, Gil Perez was seen on duty as a palace guard the day before his mysterious appearance in Mexico.

Why Governor Demarinas hated this guard isn't known. Gil Perez was sent back to Manila to retake his position as a palace guard and lived a seemingly uneventful life ever after. Believe it or not actually. These occurrences are actual real life events!  with elements of Star Trek but even still facts are facts!

Maybe somebody is having a laugh but one thing is clear. The records while contentious are indisputable. I've tried to give an accurate account of teleportation in 1593 which transpired in Mexico City. Did the Starship Enterprise save Gil Perez' neck by travelling back in time?

Would you have believed Gil Perez "Beam me down,Scotty story?"