Heres a question fans of Star Trek Picard are asking.

To recap trekkers we know In Star Trek: Picard's season 1 finale, Picard did indeed perish from his disease after he helped save the galaxy. But Dr. Altan Soong (Brent Spiner) and Dr. Agnes Jurati (Alison Pill) successfully transferred Picard's mind into the Golem, granting the retired Starfleet Admiral a new lease on life. 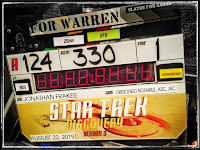 I just finished directing a couple of episodes of Star Trek: Picard. I can confirm that one of our old crew, the omnipotent Q, played by John de Lancie, is in fact in both of the episodes that I direct.

Is there a season 3 of Star Trek: Picard?

So now Picard's crew are time traveling to repair the fabric of time, lo and behold Q (John DeLancie) has lots of surprises for Picards fledglings. We see a Dictator Picard!!!! Why??? So what hope is there for Earth? What does the Federation represent with a Picard Totalitarian regime in power?

Will the fabric of time shatter if the two Picards meet? or is this something else? The Borg Queen also makes an amazing appearance and in order to save the future, wait for it 😁 Picards crew enlist her help!!!  So whats going on?

All is not the same in trekiverse, times are a changing!!!! What is Q up to?

Marina Sirtis, who plays Counselor Troi, and J. Frakes were briefly in Picards last season. Brent Spiner, who played Data, is back in another role. Seven of Nine and Picard never met in TNG continuity but in Star Trek Picard Jeri Ryan reprises her role and joins a lot of dots.

Do you think the Federations moral compass has gone completely mad, assasins out for blood, is not very diplomatic or, "we come in peace" friendly, is it?