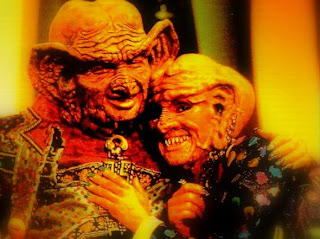 A Ferengi male is expected to remember and follow all of the 285 Ferengi Rules of Acquisition. The Ferengi Rules are actually quite funny. Ferengi Females are forbidden to quote the rules and wear clothes due to their second class residential status. Ferengi Law bans females from ever making business deals.

The first Rule of Acquisition was written 10,000 years ago by the Original Grand Negus. His name was Gint. When Zek's (Current Grand Negus) greedy personality was changed by aliens he encountered in the Bajorian Wormhole, Zek revised the Ferengi Rules of Acquisition.

Quark and Rom of DS9 were horrified. Every good Ferengi follows the Rules with religious devotion from an early age. The use of the Bajorian Orb had a drastic effect on Zek and in his lunatic condition, the Grand Negus set up the Ferengi Benevolent Society. Fortunately for Ferengi everywhere, Zek's crazy personality was only temporary and the new society and rules were scrapped. Yee-ha!


The Ferengi Code of Living.

1 Once you have their money, you never give it back.
3 Never pay more for an acquisition than you have to.
6 Never allow family to stand in the way of opportunity.
7 Keep your ears open.
8 Small print leads to large risk.
9 Opportunity plus instinct equals profit.
10 Greed is eternal.
13 Anything worth doing is worth doing for money.
16 A deal is a deal, until a better one comes along!
17 A contract is a contract is a contract, but only between Ferengi.
18 A Ferengi without profit is no Ferengi at all.
19 Satisfaction is not guaranteed.
21 Never place friendship above profit. 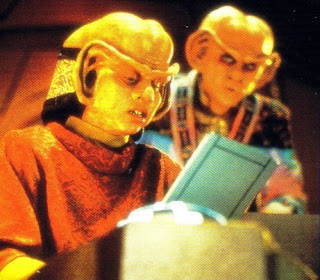 22 A wise man can hear profit in the wind.
27 There's nothing more dangerous than an honest business man.
31 Never make fun of a Ferengi's mother, insult something he cares about instead.
33 It never hurts to suck up to the boss.
34 Peace is good for business.
35 War is good for business.
40 She can touch your lobes, but never your latinum.
41 Profit is its own reward.
44 Never confuse wisdom with luck.
47 Don't trust a man wearing a better suit than your own.
48 The bigger the smile, the sharper the knife.
52 Never ask when you can take.
57 Good customers are as rare as latinum, treasure them.
58 There is no substitute for success.
59 Free advice is seldom cheap.
60 Keep your lies consistent.
62 The riskier the road, the greater the profit.
65 Win or lose, theres always Huyperian beetle snuff.
69 Ferengi are not responsible for the stupidity of other races.
75 Home is where the heart is, but the stars are made of latinum.
76 Every once in a while, declare peace. It confuses the hell out of your enemies. 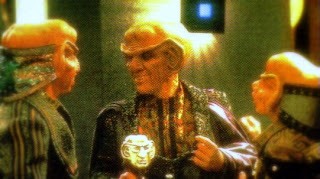 79 Beware of Vulcan greed for knowledge.
82 The flimsier the product, the higher the price.
85 Never let the competition know what your thinking.
89 Ask not what your profits can do for you, but what you can do for your profits.
94 Females and finances don't mix.
97 Enough is never enough.
102 Nature delays but latinum lasts forever.
104 Faith moves mountains of inventory.
106 There is no honour in poverty.
109 Dignity and an empty sack is worth the sack.
111 Treat people in your debt like family, exploit them.
112 Never have sex with the boss's sister.
113 Always have sex with the boss.
117 You can't free a fish from water.
121 Everything is for sale, even friendship.
123 Even a blind man can recognise the glow of latinum.
139 Wives serve, brothers inherit.
141 Only fools pay retail.
144 There's nothing wrong with charity... as long as it winds up in your pocket.
162 Even in the worst of times a Ferengi turns a profit.
177 Know your enemies, but do business with them always.
181 Not even dishonesty can tarnish the shine of profit.
189 Let others keep their reputation. You keep their money.
192 Never cheat a Klingon, unless you're sure you can get away with it.
194 It's always good business to know about new customers before they walk in your front door, so you can rob them blind.
202 The justification of profit is profit. 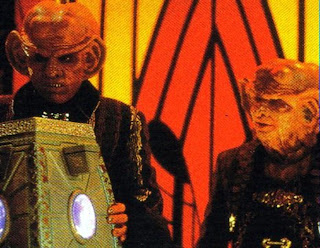 203 New customers are like razor toothed gree worms, they can be succulent but sometimes they bite back.
211 Employees are the rungs on the ladder to success. Don't hesitate to step on them.
214 Never begin a negotiation on an empty stomach.
215 Demand fully clothed females undress before you.
218 Always know what your buying.
223 Beware the man who doesn't make time for oo-mox.
229 Latinum lasts longer than lust.
236 Humans have a price, but you can't buy fate.
239 Never be afraid to mislabel a product.
242 More is good... all is better.
254 Lies are good for business.
255 A wife is a luxury... a smart accountant is a necessity.
261 A wealthy man can afford anything except a conscience.
263 Never allow doubt to tarnish your lust for latinum.
266 When in doubt, lie.
284 Deep down everyones a Ferengi.
285 No good deed ever goes unpunished. 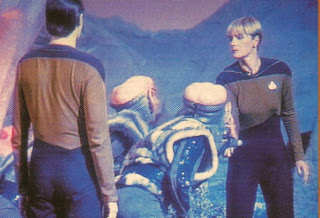 1A If they want their money back, give it to them.
10A Greed is dead.
21A Never place profit before friendship.
22A Latinum tarnishes, but family is forever.
23A Money can never replace dignity.
285A A good deed is its own reward.

Seeking out new life on new civilizations is a job for Captain Picard's super fast Galaxy Class Enterprise NCC 1701-D. In our galaxy, the Milkyway is home for earth's happy ball of beings, Vulcans, Cardassians, Vidians, Romulans, Warrior Klingons (tolerant towards weakling humans), and friendly intelligent lifeforms too, all scattered across the stars in the great expanse of space. Diverse Intergalactic aliens live in the Gamma Quadrant, Delta Quadrant, Alpha Quadrant and Beta Quadrant. But who cares, right? 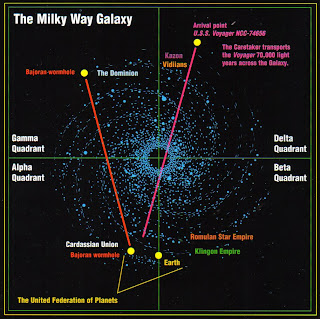 The galaxy is full of intelligent races and murderers, fascinating creatures really except beware! Some races like the flesh diseased Vidians only want to meet you, so they can steal your precious organs. These alien lifeforms will leave you gasping for your last breath of fresh air as darkness descends and closes in on you! Other bloodthirsty villains like Khan Noonian Singh set their sights a little higher and go after bigger fish to fry. Captain James T. Kirk encountered Khan with designs to exact revenge on the starship USS Enterprise NCC 1701 just to settle old scores. Its very cold in the vacuum of space. So don't get mad just get even!

The four quadrants of the Milkyway stretch across 100,000 light years with a center swell or black hole extending 10,000 light years. The Milkyway black hole has been nicknamed "The Monster" by experts studying physical and chemical properties of celestial bodies in the sector. Each quadrant is extremely large.

According to Spock's logical computations and analytical equations, each quadrant is estimated to be eight billion cubic light years, containing hundreds of thousands of sectors. A sector is a primary unit of measurement in charted space, 20 light years across and encompassing 5- 10 star systems.

The close proximity of the stars at the core of the spiral galaxy is dangerous to navigate for any starship. Black holes, dark energy and dark matter exists in the vast expanses of the universe so imagine running into one of those in your intrepid starship. In the reality of Star Trek, such encounters don't pose a great risk for Federation starships. Spacecraft simply navigate around them! HAHA! What about when USS Enterprise NCC 1701-D was thrown across space to Galaxy M33, on the far side of Triangulum.? Yes I did use the word "thrown." An impressive 2.7 million lightyears away from earth but fortunately thanks to the "Travellers" input the Enterprise-D brought everyone back! How extremely fortunate for Picard's ship. The crew escaped the galaxies bountiful pitfalls that should at the very least have trapped or gobbed up the Flagship USS Enterprise NCC 1701-D.

The unknown inspires us to make new discoveries. Its the only way earthlings can truly unlock the supreme mystique surrounding the celestial treasures in space, which is why we must continue with our space programme, develop our technologies, educate ourselves and build a wicked starship!