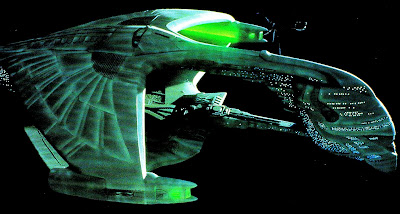 This intimidating warbird was first seen in Star Trek The Next Generation. It happened in 2364 when Captain Picard's Enterprise was called to investigate disturbances along the neutral zone. It was 53 years, seven months and eighteen days since last contact, in 2311 ( after the Tomed incident- Captain Kirk) was made with the pointy eared Vulcan offshoots.

Meanwhile Dr Crusher is busy thawing out frozen humans who had snuffed it in the late 21st century, which Data thoughtfully salvaged earlier. When the sneaky Romulans do show up, they finally agree with Picard to work together and figure out whos been destroying their Outposts. "The Neutral Zone" is a good episode with some very funny lines. It also laid the groundwork necessary for many other story lines.


"Data why did you bring them back to the ship?" - Capt Picard


"It was either that or leave them there, sir." replies Data


"But Data they were already dead."- Capt Picard


"Well they're alive now. We're going to have to treat them as real living human beings!" - Picard

Patrick Steward did a great job here playing the unimpressed commander and the scene between himself and Brent Spiner is priceless. It makes me laugh every time. The captain gave no thanks to Data for saving three people from oblivion!

The Imperial Romulan Warbird, D'deridex class or type B is equipped with covert cloaking technology. Its almost twice the size of Captain Picard's Galaxy Class Federation Flagship Enterprise NCC 1701-D and is a formidable adversary in combat, developed approx 2345.

Its dangerous and virtually undetectable cloaking device is even more effective by cutting power and staying motionless in space. The Treaty of Algeron has kept the peace between the Federations (U.F.P) and Romulans for over 50 years. It forbids Starfleet from developing cloaking technology.

The Romulan ship has powerful firepower with aft and forward disruptor cannons, however these may not be fired when cloaked. Like the USS Enterprise NCC 1701, Romulans use photon torpedoes, but they prefer disruptors over phasers. All warbird shield protection is non functional when the ship is cloaked.


The power source of the warbird is a forced artificial quantum singularity, similar to a miniature black hole, unlike federation starships which rely on matter anti/matter cores for energy and warp propulsion.The menacing bird of war is fitted with a tractor beam and is always in a state of alert, ready for battle with charged disruptors.

The ship does not have separation capability or landing struts, nor is it highly manoeuvrable due to its bulk which measures 1200 meters in length. The warbird is warp capable with a top speed of just less than the federation's flagship. Lets hear it now, Aaaahhh, What a shame. All that spiffy technology. Captain Picard's Enterprise NCC 1701-D can out manoeuvre pointy eared space satans in their spooky green ships easily. So who's the best? Who's the best? Why the good guy is!! The Romulan crew quarters are located in the forward section of the Warbird as is the ship's Bridge, which has navigation, scanning and engineering stations. The nucleus of all the Romulan D'deridex Class activities.

Make It So With The Galactic Archives of the Star Trekking Blog! Happy Hunting.
Posted by SpacerGuy at May 27, 2007 No comments:

In 1966 Nichelle Nichols played Lieutenant Nyota Uhura for three seasons going boldly where no woman has gone before. In 2266 Uhura took to the stars aboard the original USS Enterprise NCC 1701 in her most famous role as Communications Officer entertaining viewers with her "Hailing frequencies open, Captain." Her character is eventually promoted in Starfleet to the rank of Commander. Indeed Uhura reached deep into the hearts and minds of trek fans right accross the space time continuum and proved to be a valuable technician manning the USS Enterprise 1701. Under the command of Captain Kirk, Uhura is responsible for all incoming and outgoing starship communications. Her bridge responsibilities require establishing first contact with alien worlds, bypassing and repairing communication starship systems, detecting and isolating communication signals, responding to distress calls, warning the Captain and raising Starfleet Command. 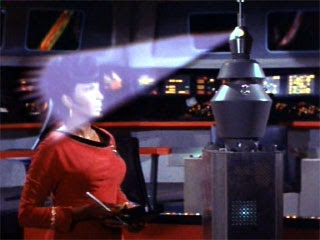 Uhura can always be relied upon to cheer up the USS Enterprise by singing and seranading to her fellow crew mates in song. In fact her most shocking interstellar experience occured on stardate 3541.9 when the Enterprise was taken over by the space probe Nomad. The probe misunderstood Uhura's singing of 'Beyond Antares,'which she was fond of and assimulated all her memories in an effort to correct a malfunctioning biological unit. Captain Kirk was naturally displeased with Nomad but fortunately Dr Mc Coy's skilled medical techniques restored Uhura's memory to within fully operational starship parameters.

On stardate 5784.2, Uhura performed the first groundbreaking kiss between an Africian-American and a Caucasian, controlled by alien empaths, she was forced to kiss her commanding officer, Captain James T. Kirk in Platos Stepchildren. It was too bad for Trekkies in Europe because it was over 25 years before British television allowed it to be broadcast. Thats how delayed Europe is to the Americas. The history of Star Trek from the 1960s to 2007, depicts conflicts leading to the eventual rise and rapid emancipation of women on tv, films, the internet and societies accross theglobe. Nichelle Nichols, Whoopi Goldberg as Guinan in Star Treks TNG TenForward, JoanCollins as Edith Keeler in Star Trek's 'The City on the Edge of Forever', Mary Mc Alese as President of Ireland, Governor Sarah Palin and Sonia O'Sullivan have succeeded and become major forces to be reckoned with. 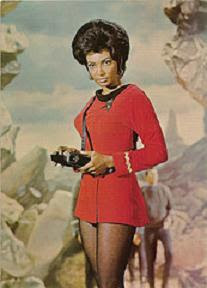 In 1968 Star Trek took the first step with Nichelle Nichols and it was a very neat one indeed despite NBC insisting that Kirk and Uhura's lips not be captured on camera. Even so, Nichols states in her book, 'Saturn's Child,' that the kiss was real. Because she is both female and black, Lieutenant Uhura represents two disparate communities united in the shape of one actress. Its interesting to note how far society as a whole has come all because of Star Trek and Nichelle's chance encounter with Martin Luther King. He urged her to remain on as Communications Officer because her character served as a role model not only for blacks but for everyone. Luther's words had such an effect on Nichol's that she later revealed in a "20/20" interview, "I knew that now black children must look at me on that ship even if I was pushing some buttons and know that 'this is a person that I can identify with, that I can emulate.'" One of those kids was Whoopi Goldberg, who told Starlog magazine, "I've been a Trekkie from way back. The only time you ever saw black people in the future was on Star Trek." In 1987 the Enterprise Starship Legacy lived on in the crew of the USS Enterprrise NCC 1701-D. Nichelle and Whoopi may not be in the captain's chair yet but Guinan is on the Flagship of the Federation and Lieutenant Uhura is on the Bridge of the USS Enterprise NCC 1701. 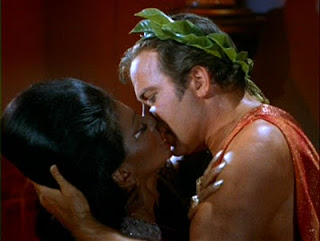 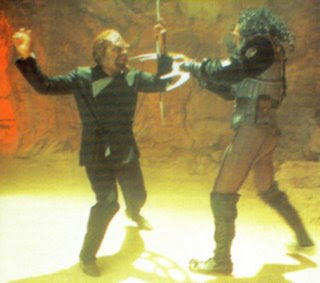 There is no honour in boring an enemy to death says "Worf" from Star Trek's The Next Generation who lives by the Klingon code of honour.
Image Copyright Belongs to Paramount Pictures or CBS Paramount Television.

The Code of all Fierce Klingon Warriors.

1. There's nothing shameful in falling to a superior enemy.
2. Klingons appreciate strong women.
3. Only fools have no fear.
4. Do not mock Klingons. It makes us angry.
5. The true test of a warrior is not without it is within.
6. Klingons do not take prisoners.
7. Every Klingon hopes to die in the line of duty.
8. Klingons do not play with toys.
9. Survive and Succeed!
10. Prunejuice is a warriors drink!
11. Every Klingon hopes to die in battle, better to die on your feet than serve on your knees.
12. Take the simpler approach. If words do not come easily, say nothing at all.
13. A friend may become an enemy in less time than it takes to draw a dagger.
14. Four thousand throats my be cut in one night by a running man.
15. Drink not with your enemies.
16. Revenge is a dish best served cold.
17. Men do not roar. Women roar. Then they hurl heavy objects. And claw at you.
18. Resistance is futile. Oh Yeah? Assimilate This! Kaaboom.
19. Klingons never do anything small. Maybe today is a good day to die! Prepare for ramming speed!
20. You question the worthiness of my Code? I should kill you where you stand!
21. Behold the mighty warrior Kahless the Unforgettable! The greatest Klingon code-warrior who ever lived!
22. Human weaklings fear Bat'leth combat. They are of no concern to warriors.
23. All warriors are cold warriors in space.
24. Cry havoc and let slip the dogs of war!
25. Parting is such sweet sorrow, do we not hear the chimes at midnight?

Worf's Klingon Bat'leth means sword of honour. Even though this is Science Fiction, its interesting to note how a weapon of death is looked upon with such admiration.

Live Long and Prosper Trekkers! Enjoy the Galactic Archives of the Star Trek Space!
Posted by SpacerGuy at May 11, 2007 2 comments:

Space The Final Frontier. These are the voyages of the starship Enterprise. Its Five Year Mission, to explore strange new worlds, to seek out new civilisations. To boldly go where no man has gone before.

So wheres Captain Kirk and the U.S.S Enterprise NCC 1701? Why out there, somewhere in the swirling cosmic clouds of the Milkyway, second star to the right.

The fact is our "tin plated dictator with delusions of godhood", Kirk has warped out of sensor range. Theres just far too many epic battles to be waged. Maybe next time Trekkies. There have been many times when conflict with the Romulans has been unavoidable. The Federation's battles with the Romulan Star Empire resulted in the formation of the Neutral Zone in 2160. 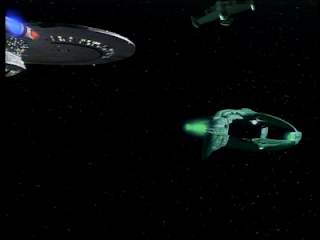 It interesting to note that the Earth/Romulan war as it is known led to the formation of the Romulan/Federation Neutral Zone because both sides wanted Peace. It was called the Earth/Romulan War because the Federation was established as a planetary state known as United Earth which kicked off in 2063. Zefram Cochrane established an earth alliance with the Vulcans who noticed his first warp space flight during First Contact. The constitution of the United Federation of Planets was created in 2161. Captain Picard's U.S.S. Enterprise NCC 1701-D managed to prevent a Borg invasion proving that even "human weaklings" can stand up and be counted.

Live Long and Prosper Trekkers! Enjoy Your Star Trekking.
Posted by SpacerGuy at May 02, 2007 2 comments: