UPDATED The biggest sci fi celebration is just moments away from thrilling earthies at the planets coolest hotel set in Las Vegas. Organised by Creation Entertainment, The Star Trek Experience Hilton Hotel had everything for the science fiction fan. The owners spent a cool 50 million bucks in creating this ultimate trekkie magnet and then ripped it all down! GAWD now that was totally sacrilegious!!! 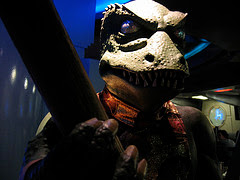 Fans used to hangout in Quark's bar or visit the USS Enterprise-D's bridge. Now it gone, sniff. The hotel had even got a souvineer star trekking store and many other wonderful attractions. There were models of popular trek characters and ships located all around the hotel. The lizard gorn and U.S.S. Enterprise 1701-D were my favourites.

The Las Vegas Convention kicks off tomorrow and the programme lasts from 9th to 12th August. Those were the good ol' days. Trekkers beamed in from all over the Galaxy to share in the fun event which included Celebrity guest appearances, parties, food functions, photo ops, autographing, vendors, auctions, contests live music, comedy and a host of other surprises.

It pains me to report the Star Trek Experience is now Gone but it was fun while it lasted.

Its going to be one helluva gathering of cosmic earthies united in galactic friendship!

Live Long and have fun Trekkers!
Posted by SpacerGuy at August 07, 2007