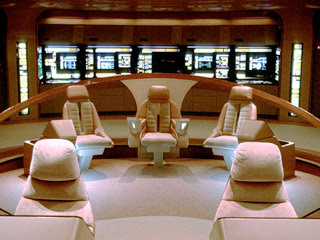 Star Trek The Tour is the biggest assembly of sets ever constructed where trek fans can make contact, explore and capture the essence of Gene Roddenberry's much loved Star Trek television legacy.

The 50,000 square foot massive exhibition opened its doors on Friday Jan 18th 2008 which lasts for one month in Long Beach at the Queen Mary Dome, California. Trekkies are beaming in from all over the universe to experience this spectacular sci fi creation. The interactive tour is an absolute trek paradise for trek fans and the tour will be visiting forty cities across north america over the next five years. Tickets are available through Ticketmaster.com and the Queen Mary Dome Box Office. 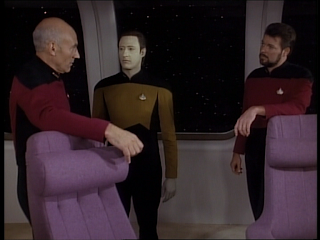 The Star Trek Tour is open weekdays from 10am to 8pm and weekends 10am to 10pm Adults pay $30 weekdays and $35 at weekends. Ticketmaster has special packages.

The mystique appeal of Star Trek will influence cosmic thinking for eons to come with its array of large iconic Starfleet ships, including Kirk's legendary flagship herself, the USS Enterprise 1701-A which hangs overhead in the Rotunda. (where all trek minds begin their journey.) 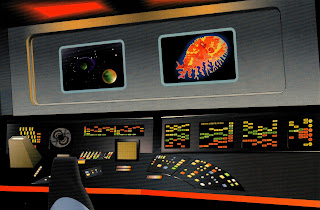 
Heres a list of all the Star trek Tour sections:

Have fun trekkers!
Posted by SpacerGuy at January 26, 2008 No comments:

Spock - Fight to the Death.

Remember Kirk's and Spock's fight to the death in Amok Time? well I betcha you never thought Jim Carey aka "Cable Guy" was keen on Star Trek? Lets warp back in time. Science Officer Spock is experiencing a loss of emotional control caused by a build up of adrenaline in his body. In this Star Trek classic we see a crazy guy Spock but there is an underlying logic to his madness.


Questions: Who stepped in and injected Kirk to give the captain a fighting chance? What class of stimulant was it and what were the overall effects? 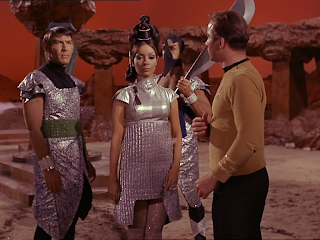 Spock's in the gripping throes of Pon Farr and needs to go home to vulcan to mate. Dr. McCoy runs tests on the First Officer and tells Kirk that Spock is suffering from an imbalance of toxins that will kill him within a week, eight days max. Kirk's decision to head back to Spock's home world finally happens after much deliberation with crew members, Starfleet, and emotional upheaval for Spock.

It was Starfleet's intention to demonstrate a show of force to the Klingon Empire by sending their best Federation starships at the Altair VI border.

Dr McCoy discovers that Spock's body is being flooded with adrenaline. If the Enterprise doesn't reach Vulcan in eight days, Spock will die. So what did Starfleet say when Captain Kirk asked for authorisation?

"Forget it Kirk, he's just the half breed vulcan!!, Altair VI has top priority. Starfleet out."

At the recommendation of Dr McCoy, Kirk flatly disobeyed the chain of command and risked his starship command. In a bid to save First Officer Spock's life, the USS Enterprise 1701 diverts her course and proceeds to Vulcan in-order to find a cure for the vulchie's life threatening blood fever.


Amok Time shows us some very interesting character moments amidst a wonderful backdrop of Vulcan scenery in the Star Trek continuum. Spock meets his lovely Vulcan fiancee T'pring (pre arranged by the parents ever since their childhood by a meeting of minds.) T'pring only had plans for her secret Vulcan lover Stonn revealed after the battle. 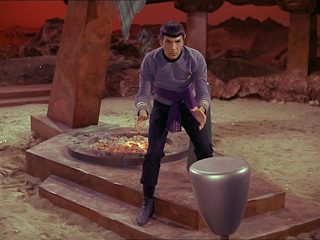 T'Pau is the High Priestess who presides over the wedding ceremony, with Kirk on standby as T'pring's champion who is forced to fight a duel to the death with his best friend!! This isn't just any ordinary wedding and I was surprised to notice Spock's parents absent.

I guess Spock's mom and dad didn't have the stomachs to watch their only son slaughter innocents on their precious ancestral grounds. Star Trek fans see Spock's home world "Vulcan" for the first time in this episode with the science officer's famous words "Live Long, T'Pau and Prosper" voiced for the first time. This is just cool classic Star Trek.

Kirk agrees to fight for T'pring but is mortified to discover, its a duel to the death. Spock and Kirk are evenly matched except for the thin Vulcan air which takes its toll on the captain. McCoy gives Kirk an injection to give him a fighting chance in the Vulcan atmosphere. The fight resumes and Spock strangles Kirk, dropping his captain's apparently lifeless body to the ground. Dr McCoy steps in and confirms Spock's worst nightmare. Kirk is dead. Shock sweeps over Mr Spock snapping him out of his Plak tow blood fever. T'pring's reason for invoking the challenge is because she wants to marry Stonn. The marriage is cancelled. Back on the starship Enterprise 1701 all is revealed by Dr McCoy who faked the captain's death with a neural paralyser. Of course, Spock displays a momentary lapse of emotional control with a big grin, when he sees the captain alive.


Jim Carey did a re-enactment of the "Amok Time" with Spock and Kirk's - fight to the death duel in his "Cable Guy" movie. It was brilliant. In the duel scene you'll see why this master of crazy comedy is just so funny with Chip and Kovac slugging it out in the arena. Jim Carey's improvised "Star Trek" crazed sound effects are totally hysterical. I love how Cable Guy carries on with humming the "Amok Time" lyric as he walks away from Kovac (Broderick), triumphant and with his hands held high.


Answers: Dr. McCoy saved Captain Kirk. He stepped in with his hypospray and injected Kirk with a triox compound telling Kirk it should help him breathe better. The stimulant was in fact a neural paralyser which faked Kirk's death and saved Spock's life.