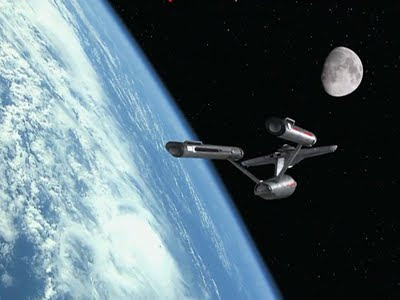 The U.S.S. Enterprise(NCC-1701), like her twelve sister ships* in Starfleet Command is primarily a scientific and research vessel of deep space exploration of the 23rd century. What is the USS Enterprise 1701's primary mission objective?

Why seeking out new life forms on new civilisations, boldly contacting aliens who have discovered the basics governing warp technology key to achieving interstellar warp travel and what will the United Federation of Planets do? They'll send out Kirk's flagship to wellcome the fledglings into the club.

In over forty years of meeting new lifeforms, the USS Enterprise NCC-1701 has upgraded with at least two refits during her much watched five year missions(2265-2270). Kirk's ship has engaged in scores of first contacts, military conflicts and time-travel. She has defended earth from the Klingons, Romulans, a Planet Killer, and the Alien Space Probe. Under command of Captain James Tiberius Kirk, the Enterprise NCC-1701 was destroyed in 2285 in a bid to outwit Commander Kruge and his klingon bird of prey. 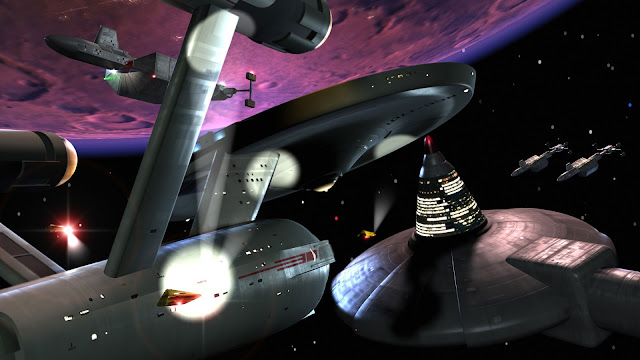 Science Officer Spock is always on the lookout for subspace anomolies, spatial disturbances, hostile energy lifeform readings and with sensors scanning at maximum to locate accurate planetary positions, Spock's analysis is strategic to pinpointing starship dangers in a matter of seconds on the ship's approach to a new star system. The USS Enterprise's Science Station provides Captain Kirk with enough military intelligence to blast potential enemy starships to smithereens but lets not forget Chief Engineer Scotty. 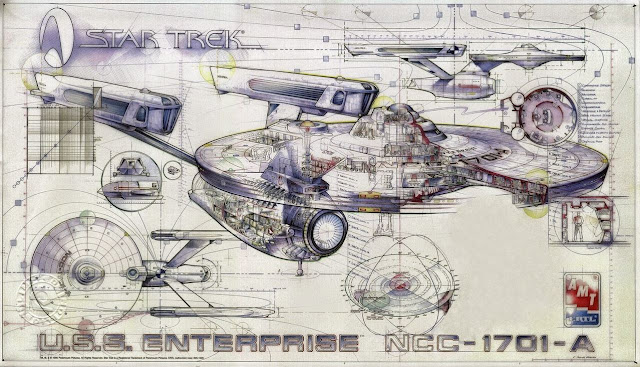 When the USS Enterprise 1701 took a mighty, helluva walloping from Romulan enemy fire, Scottys first on the Captain's case about the structural integrity of the ship and his precious warp engines. "The ship is packing quite a walloping, she can't take much more of this. She'll blow up in four hours." In the eyes of Commander Kruge's Lieutenant Commander, the USS Enterprise 1701 was a formidable "battlecruiser" capable of defeating her enemies but its really Scotty's engineering "Miracle Worker" touch keeping her together. In Star Trek's universe, Kirk's constitution-class starship doubles as the flagship of the United Federation of Planets peace-keeping force and as a military heavy cruiser. 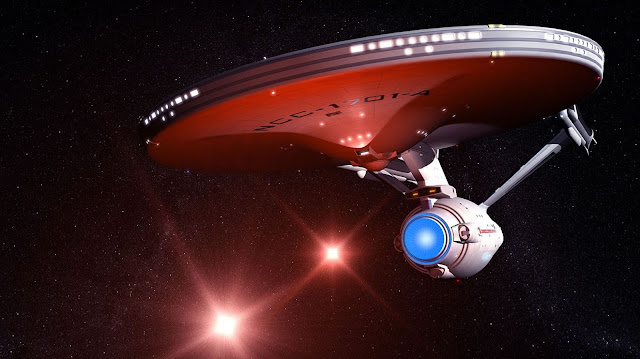 While under way, every Federation starship is completely manned at all times. Aboard the USS Enterprise it's no different. Each watch consists of eight hours of normal duty. When yellow alert sounds, a second watch is activated and during red alert, all watches are called to battle stations even if your'e snoozing soundly in your bunkbed.

Each of the USS Enterprise NCC 1701's 23 decks is equipped to handle its own gravity. When the ship jumps to warp, Anti-acceleration/deceleration inertial dampeners prevent the crew from leaving strawberry stains on the walls from rapid acceleration.

The Enterprise is equipped with shuttlecraft for ship to planet away missions. In crises situations with the ship is under attack or when Captain Kirk is cheating the jaws of death (Doomsday Machine) Trekkies can always rely on the transporter pad malfunctioning. Just when its needed most! Fortunately for Chief Engineer Scotty, the U.S.S. Enterprise NCC - 1701 has two well known shuttlecraft. 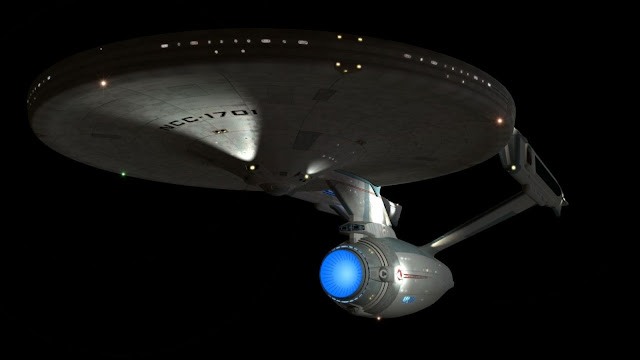 During special missions, the "Galileo" and "Columbus" are called into service to transport crew members/ambassadors/v.i.p's and equipment towards planets or starships when the ships transporter is out of action. They come in handy for covert operations too and have excellent space navigation ability. The seven seater shuttles are equipped with limited warp and impulse drive engines, shields, life support systems, a food replicator and emergency provisions for longer stays on planets.

Constitution-class ships use matter, anti-matter reaction converters regulated by dilithium crystals housed in Main Engineering's warp drive engines which can propel the USS Enterprise NCC-1701 at faster than light warp speed. In the episode "Elaan of Troyius", Scotty used the Dolman's necklace which was stung together with dilithium crystals in order to repair the Enterprise's sabotaged, fused dilithium crystal converter. The Dolmans neckless powered the ship's warp engines with enough energy to shoot off a couple of photon torpedoes at the engaging Klingon ship, badly damaging it and causing it to retreat. 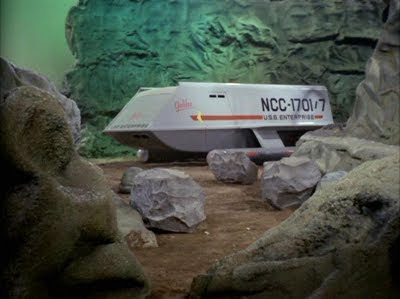 Starships like Darth Vader's Star Destroyer haven't got an equal chance against the technological might of the Enterprise's phasers and photon torpedoes because Vader's ship, although impressive, only has laser beam technology, cannons and gun turrets capable of making only a few dents in the USS Enterprise's shields. Whose got the most powerful Starship in the Universe? Trekkies do! Thats who! Woo Hoo! But I dare you to prove me wrong! Phasers are more technologically advanced and likely to be hotter that lasers right?


Tractor beams are the opposite of deflectors which pull space objects as opposed to pushing physical energy away. They are used to take smaller ships in tow or move space debris out of the Enterprise's flight path. At the stern of the USS Enterprise's are the impulse engines and the nacelle propulsion systems which makes safe interplanetary space flight at sublight and warp speed. 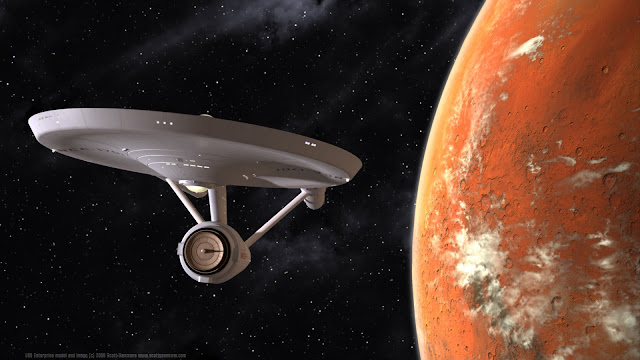 The USS Enterprise consists of 55 officers of command rank in gold uniforms, 15 communication specialists in red uniforms, 136 medical and scientific research personnel in blue uniforms, 132 engineering specialists and a 88 member security force in Red uniforms who usually meet their maker. In addition to the crews complement of 428, the Enterprise has stateroom accommodation for visiting ambassadors, admirals and V.I.P's 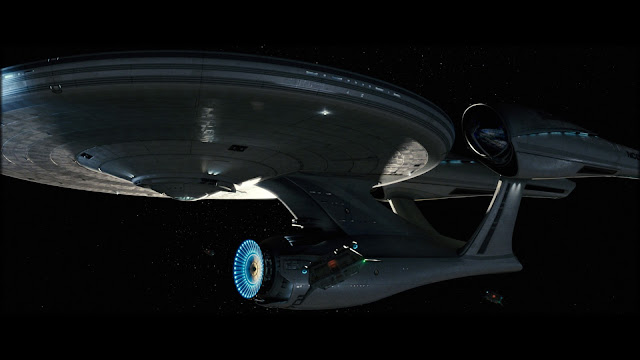 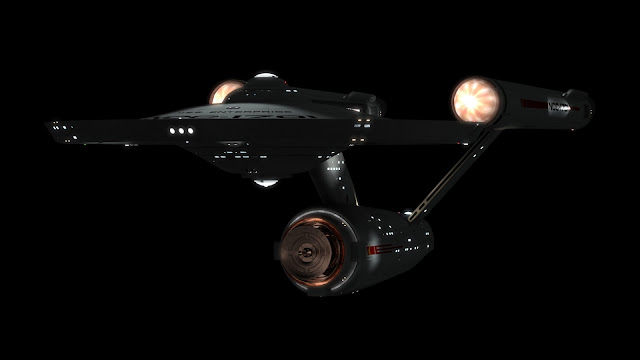 One of the technological advances that makes the Constitution class starship possible is the duotronic computer designed by Dr. Richard Daystrom in 2243. In 2268, the Enterprise field tests what Dr. Daystrom hopes will be an even greater invention, the multitronic or M5. Unfortunately Daystrom designed the machine based on his very own memory enigrams which for a moment seemed like one great leap forward for computer science but alas the M5 proved to be more unstable than its creator, Dr. Daystrom who was at a loss to explain its emotional outbursts.

Star Trek depicts a future of bright promise. I hope it stays that way. The USS Enterprise NCC-1701 is a vehicle of peaceful exploration and research resorting to strategic counter measures as a last resort. Starfleet Command represents the "logical" evolution of today's military into a servant of man's quest for knowledge, as well as a the need for a strong defense.