Project yourself into a far-flung corner of the universe where your very life hangs in the balance, all because you stepped through a time portal. A new doorway opens and spits you out into the dimensional plane of another galaxy. Is it possible to move in the 1st 2nd and 3rd dimension (up, down, forwards, backwards and sideways) and if so why does time hold us prisoners in the 4th dimension?


The portal vanishes in mid air abandoning you on a strange new world in the distant future. Time travel can cause a tremendous shock to the system especially for someone having experienced it for the first time. But the body and mind has a way of coping even with the most traumatic of circumstances.

An army of humpback Morlocks emerge from the underground caverns yelling at you You've been spotted. They advance towards your co-ordinates using a steady delta pattern formation. Its funny how fear has a strange effect on ones feet and can make them run instinctively before logic kicks in. Frak, your communicator stops working and tricorder scans are detecting unusual energy readings nearby. 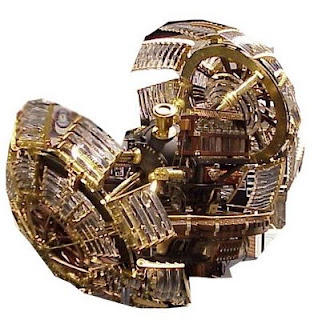 Trained astronauts are prepared for away missions on alien planets but frak it, time travelling is only supposed to happen in Science Fiction. Heres another fine mess you've gotten yourself into. Earth is unreachable and humans are nowhere to be seen which is creepy. Tricorder readings indicate this is an M-class planet with a nitrogen-oxygen atmosphere with two suns, a neutron star and a neighboring wormhole in the vicinity.... nothing is normal about this place.

It would be so gratifying to let loose with an emotional outburst right about now, There simply has to be some way to return to Earth in the 21st century using time-travelling means. The morlocks have lost interest in you now. What are they up to? and who are these Eloi humans?

H. G. Wells's 1895 novel The Time Machine set people's imaginations on fire about time travel. Then, in 1905, Einstein's Theory of Special Relativity seemed set to add substance about time travel in our universe, nearly making it so. The logic of it is fantastic. His theory says that time isn't constant but slows down the faster you go - and the theory has since been proved. In effect, one has to be going very fast indeed. Some scientists have estimated that, if humans could travel at the speed of light, we could go backwards in time but Einstein determined otherwise. Travel at the speed of light is impossible.


Other time-travel theories involve wormholes in spacetime, black holes and other mysterious bits of physics like dark matter. But you probably won't be shocked to read that no one has actually succeeded in building a time machine ... at least not yet.

There's a big ethical dilemma associated with building a time machine and the potential dire consequences of it falling into the wrong hands. If you travel backwards in time, you can alter the future. And if you travel into the future and then come back to the present, that too can alter the fabric of the current timeline..

In Star Trek we call these Temporal Incursions and Captain James T. Kirk is in the history books for breaking the Prime Directive. But if you can get your head round this basic paradox, come up with some extremely sophisticated technology, and understand an awful lot of mystifying, strange physics, perhaps you can become the inventor of the first time machine.