Who is Darth Vader?

Who is the dark lord of Star Wars? Its safe to say Darth Vader personifies the evil of the Galactic Empire... but what about the voices behind the dark Lord of the Sith? James Earl Jones was not George Lucas's first choice for Vaders dialogue. In fact Lucas went through several tapes of people including Orson Welles. After hearing Jone's deep bass voice, Lucas realized he had sourced the perfect commanding voice for Vader. Several actors dressed in flowing black robes with their faces masked by the famous black metal breathing screen skyrocketed Darth Vader to super-stardom. James E. Jones told Star Wars Insider ' David Prowse worked very hard to create the character of Darth Vader,' 'He is Vader'. 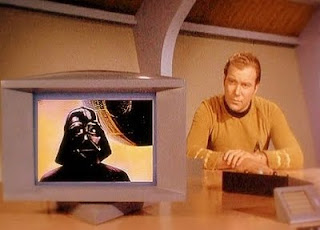 So who else was there? Bob Anderson had been Britain's Senior National Fencing Coach for thirty years. Anderson doubled for David Prowse in Empire's dueling sequences but also helped choreograph the fights. Vader seems to meet all the criteria for the perfect space villain on the surface- deep voiced, black clad, heavy breather and built 2m high for battle. He employs his extra sensory powers to keep Emperor Palpatine in power. Vaders 'dark side' aids Governor Tarkin in the destruction of the rebels. In 1980 Star Wars "Empire Strikes Back" becomes the 'Years Best Movie' exposing an inescapable truth between Darth Vader and Luke Skywalker.
Remember, Darth Vader is Master of the Dark Forces and wants you!
Posted by SpacerGuy at April 26, 2011

You are always so knowledgable about stuff like this. I feel like I learn something every time I come here.....it rocks! And, so does this post.

Thanks April, These last letters in the alphabet are the tricky ones!

It's always amazing to me that James Earl Jones went from Darth Vader to the Sandlot. Either he is that versatile of an actor or has an identity crisis. But like Morgan Freeman, I would love for him to read me stories at night. It's a shame he doesn't narrate more!

Nice writeup. The Empire Strikes Back came out in 1980.