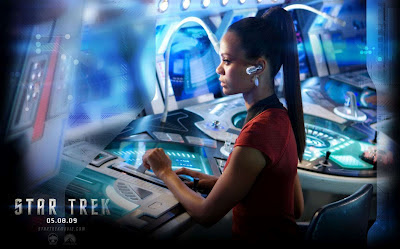 S is for Zoe Saldana aka Princess Neytiri in Avatar, the highest grossing movie of all time.

33 year old Zoe is the gal in Star Trek's prequel and J.J. Abram's hush hush Star Trek sequel due out in 2013. Our new 'Uhura' has taken over Nichelle Nichol's job aboard the USS Enterprise NCC 1701 sniff. Shes now the head honcho in communications stealing our hearts and minds with her talented linguistic tongue. I already miss those "Hailing frequencies open, Captain" but hey at least we can warp back in time!

The name 'Nyota Uhura' once translated means 'Star of Freedom' in Swahili. One of Star Trek's greatest mysteries is why Uhuras christian name was never even uttered in the classic series or movies until recently in Star Trek 2009. You'll remember Nyota comforts Spock on the turbo lift and later we see the two of them canoodling in the transporter room. Kirks hounding of Mr Spock pays off big time when they're all on the transporter. The sly little vulcan finally says her name 'NYOTA' for the first time in the new trek verse ending decades of debate worldwide and random speculation in books. 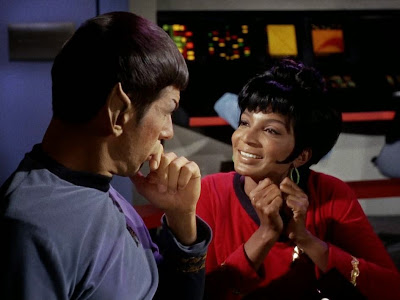 The question is how do you feel about more Spock and Uhura canoodling in the new Star Trek movie 2013?

Perhaps Vulcan self restraint and the Pon Farr mating rictuals aren't so plain and hopeless after all? Logic dictates that under the circumstances the only logical action would have to be one of desperation. Logical decision, Logically arrived at.
Posted by SpacerGuy at April 20, 2012

Like his father before him, Spock finds it logical to cultivate a compelling relationship. Nyota was, like Hikaru, a name that was not dreamed up until many years later, legitimized by canon after being used unofficially elsewhere.

I think Spock and Uhura's relationship is a great development of Star Trek XI and it would be disappointing if they abandoned it for XII.

The new Star Trek's Spock chose a different route, so I thought the relationship was a nice touch.

I don't think Spock and Uhura's relationship is an unnecessary story line to pursue but I'd still watch it! I liked Chris Pine in the last Star Trek movie more than Saldana but do think she gave a great performance in her Princess Neytiri role.

Zoe Saldana plays characters have won lots of awards for her work in the movie industry. Nichelle Nichols is legendary and there will always be a special place in my heart for her.