Star Trek XII is now the highest earner of Star Trek's franchise with takings of $328 million in 18 days! J.J. Abrams has done it again! Rotten Tomato critics have given Star Trek Into Darkness the thumbs up with 87 points. Apparently trek's sequel isn't as fresh as the prequel yet it is visually spectacular. The verdict? 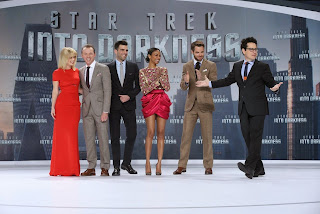 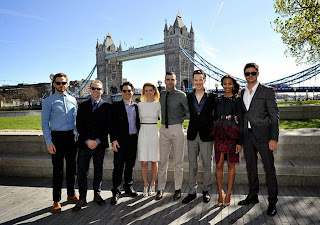 I reckon a worldwide $330M boxoffice hit speaks for itself. This time round we get a "rock solid" sequel filmed with 3D action sequences. James Cameron, Avatar's Creator was onboard during Badrobots 3D conversion process giving the film that special alternate reality dimension to fill seats.  Since the relaunch of Abram's Star Trek we've got an action packed origin story with a younger crew rebooting history. (Don't worry we won't peek, hehe.)

When Londons Section 31 building blows up, Starfleets covert operations is no longer secret. I guess Earth needs more undercover guys. In any case John Harrison (who is the genetically augmented superhuman) is really Khan hellbent on revenge. So he devises a masterplan to flush out Starfleet's top brass for some target shooting practise.

Amazingly the Admiralties battle strategists assemble in a war room full of glass windows. Perfect for an aerial ambush with Khan's gunship waiting in the wings, right outside! Kirks the only one whose combat instincts tell him to do something, fast! Remember Ripley yelling at Gorman in Aliens 2, "DO SOMETHING! F**K!!!" I think Star Trek Into Darkness needed an indecisive character with frailities like Gormans but I digress.

"You're just a PAWN Kirk, you cannot even guarantee the safety of your own crew!"

Khan is like a predator playing with his prey. Treks dark villain knew exactly how and where to take his enemies out. He simply wants payback because Starfleet's good guys broke their word! The plot thickens when Admiral Marcus pops up which leads us to the epic manhunt and another mystery. The 72 long range prototype torpedoes with Botany Bay's frozen souls trapped inside. We have to remember, Khan isn't just the bad guy, hes on a mission.

For ages the "John Harrison" mystery led us off course about the baddies true identity. Did you enjoy being kept in the dark, guessing? When Admiral Marcus revealed the existence of a Top Secret Undercover Agent, hes obviously trying to cover his tracks. Starfleet isn't supposed to be a cloak and dagger operation. The Admiral is hiding something because hes dirty but does Kirk realise this?.


How do you rate our space crusaders this time?
What did you make of Pikes final curtain call?
Did you enjoy Dr Carol Marcus striptease with Uhura's heavy breather gawping on standby?
Did Cumberbatches Khanspeak freeze you to your seat?  "No ship should go down without her captain."

I thought the film was brilliant, although the fact that they his Khan's identity means they knew we'd make comparisons. So why even do it? A fun film with lots of twists.

Thought the film was awesome as well and better than the first reboot. Both Khans were effective and the stories vary enough that one really can't compare.

I am TREK-SATISFIED! I will see it again, I will own it..I will treasure it... I say thank you for the KHAN, STRIPTEASE, PIKE'S FOND FARWELL, and SHIPS...mmm ships!

I dragged Hubby to the movie this week and he even enjoyed it (not a sci fi fan at all). As a huge Trek fan I loved the movie!! Loved the inside jokes and the echoes and the whole story line. Great stuff!

Amazing film and it hit all the beats with me.

Karl Urban, as Bones, is still the standout for me and needs more screen time in the next installment! :)

I agree with Mark, I've always thought Karl Urban makes an excellent Bones. I loved this film and have seen it twice. I may even go again but not sure if that's pushing the geek-ness too far ...

Glad you enjoyed the movie! I liked it, though not as much as the 2009 reboot. Wasn't a fan of the redone TWOK scenes and I found a lot of holes in the plot....BUT fantastic acting and amazing action sequences and lots of great Trekkie references.

Best parts for me: the Klingons, Scotty's important role he played, Sulu's captain speech, and Khans 'You should have let me sleeeep!!!' *skull smash*

I watched this movie with a couple of friends, and we all loved it.

This was an excellent film. People are just jealous...

As for the latest rendition of the Star Trek franchise, Into Darkness, I have mixed feelings. I just listened to podcast Episode 438 with Treks in Sci Fi, and all the guys on the show gave raving positive reviews. I disagree with them. For one thing, JJ Abrams and his team should have hired a better group of writers to put together a more believable well-knit cohesive plot line.
It was like Swiss Cheese and bounced all over the place. On a positive note the action, special effects, and character tie-ins, was really go.
I really like Star Trek and am a serious Sci Fi geek. I wss disappointed in this story.

I gave it a 4 out of 5. I'm still not entirely comfortable with the Abrams reboot but it's what we've got for now. It's still Trek, after all.

Any interest in joining a bloggers' book club? Here's the link: http://armchairsquid.blogspot.com/2013/06/the-cephalopod-coffeehouse-june-blog.html

I enjoyed it, too. I actually picked to watch this over Iron Man 3.

Did you hear about R2D2 from Star Wars being spotted in the film? I knew J.J. Abrams was more of a Star Wars fan, but come on, now. I love Star Wars, but I don't want to see it in Star Trek and vise versa.