Bryan Fuller bids farewell to Star Trek Discovery as the Lead writer and creative trek mastermind. He stays on as Executive Producer while moving on to other projects. Lately trek's fledgling Discovery series has been making headlines with Alex Kurtzman and  Bryan Fuller. They wrote Star Trek Into Darkness, Star Trek 2009, DS9 and Voyager a while ago kicking them up with the super mythological, and psychological extraordinaire.

The sticking point for trek's producers appears to exist in Star Trek TOS. Writers keep drawing upon the magnetic nature of its classic lifeforms, amazing story arcs and strange unknowns.

Meanwhile a conflict of interest has arisen with Fuller organizing his time between Trek, American Gods and Amazing Stories which means one had to go.

So now Star Trek fan Bryan Fuller is stepping aside to juggle his duties. The plan is to clear a path for new ideas giving Star Trek Discovery's lifeforms breathing room to traverse the galaxy, analyze strange unknowns and wow the fans. 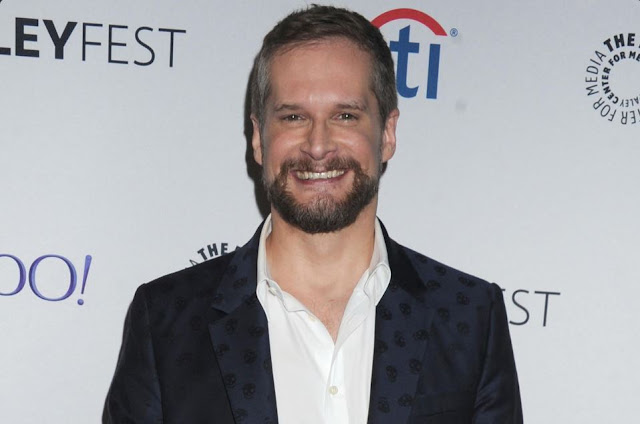 It clear CBS welcomed a kindred spirit to explore and develop the continuity of Star Trek's timeline. The word at Variety is Fuller, teased out new revelations to the fan community at Comic Con. Mythological diversity, using a LGBT character, the welcome delight of aliens,  and also what greatness a leading woman would take, clearly on the table.

What we're doing is not necessarily new in Star Trek but we get to embrace it in a modern way that Star Trek has not indulged in much in the past.


Over the last few days fans are finding out now Bryan Fuller is stepping away as the showrunner for the new CBS Star Trek Discovery show.  So whats happened?

The day to day running of Star Trek Discovery leaves Fullers lieutenants - Gretchen Berg and Aaron Harberts taking over the show. Writer director Akiva Goldman is also expected to join "Discovery" in a top creative role. Supporting Berg and Harberts. Filming will begin next month with a 2017 premiere date - pushed back to May. 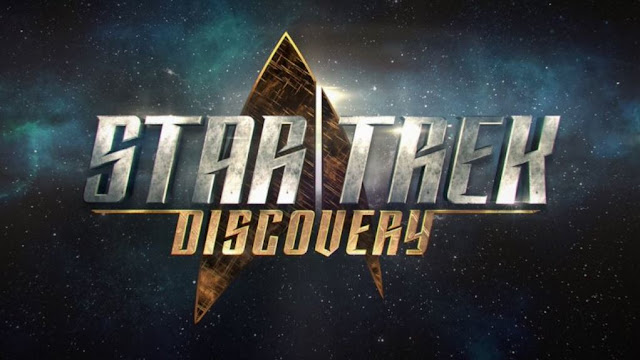 Heres what we know about Star Trek Discovery so far:


1. The series is 10 years before Star Trek the Original Series.

3. A fascinating amount of aliens will boldy go where no alien has gone before in Star Trek's universe.

4. The lead character is not going to be a male captain. Qualities will include: a neurosis, sense of humor and shes female.

6. New young blood ready to shoot first and ask questions later - all based on TOS iconic characters of course. Robots get the thumbs up. Don't you just love Robots?

7. No Romulan War, No Kobayashi Maru, maybe some Section 31 and an iteration of Amanda Grayson's storyline, (Spock's Mother) into the show.

8. Lee Pace as has agreed to play a Vulcan.

9. Seven characters will play key figures in the show.

10. Graphic scenes, profanity is still being weighed up owing to the wider audience CBS ALL Access will be able to reach.

11. Star Trek Discovery is planned to premiere in the US in January 2017

14. The rank of the lead character is a Lieutenant Commander and her name is No 1 ? 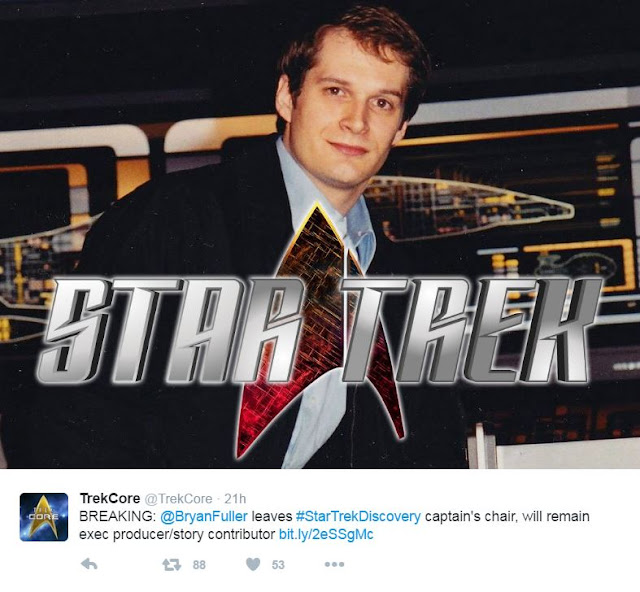 Will you be watching Star Trek Discovery on CBS or Netflix? Who do you want to be Discoveries Lead Writer? Who are you rooting for? Man, Alien or Woman? What kind of leader are you hoping for? Captain, Alien, Robot or Android? Is Star Trek trying to be too politically correct?

Star Trek is awesome﻿. Obviously, acting is a lot harder than it looks on television. Remembering lines learned off by heart takes effort but trying to pronounce all of "Star Treks" terminology must be frustrating considering trek's 16 hour work days...

The good news is Fans can now look forward to Star Trek: Discovery set to premiere in 2017.

President Barack Obama watched Star Trek a lot when he was a kid. So why has Star Trek lasted for over 50 years? Here from the White House is trekkie Barack explaining why Star Trek continues to boldly fascinate us mere mortals on Planet Earth.


What made the show lasting – it wasn't about technology – it was about values and human relationships. Trek is “really talking about a notion of a common humanity and a confidence in our ability to solve problems.”


Enjoy the video everyone. Live long and prosper trekkers.
Posted by SpacerGuy at October 17, 2016 10 comments:

Many fans eager to meet the stars tweeted while they waited. Trekkers with Admiral VIP Tickets swept by tons of people waiting in queues which took two hours to get past the check points. The only catch is VIP treatment cost £2,999! Standard Tickets were far cheaper. 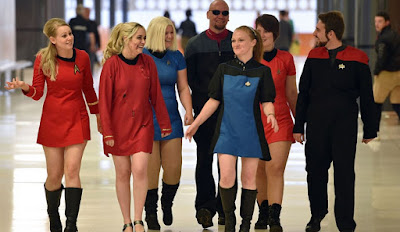 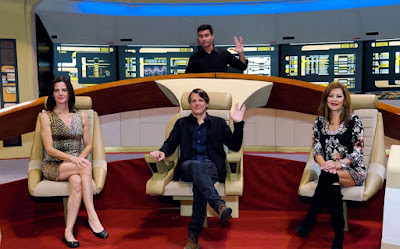 Over the weekend thousands of Star Trek fans queued for hours to get in on the action with their Star Trek TV/Movie heroes. Marie Gordon flashes her Lieutenant stripes on her red bridge officers duty uniform to curry favor but no can do! It just goes to show. Even Star Trek Lieutenants have to wait. haha!!! 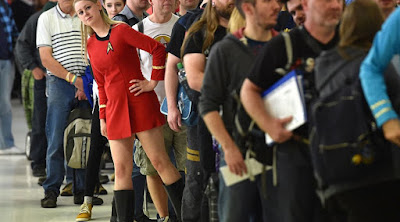 On Sunday William took part in answering questions for the fans. Heres a fun video he made specially for fans. 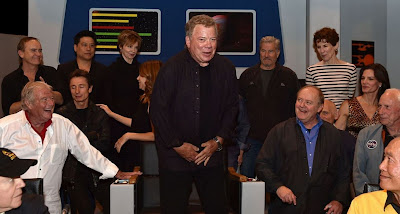 This photograph says it all. Its the launch for Star Trek's UK Destination event and the expression on the stars faces is fascinating...... William Shatner has done it again. The look on Walter Koenig's face is priceless.

These sci-fi ladies are making the most out of Star Trek's 50th Destination Event. They probably handed their tricorder, phasers and communicators over to an Ensign during the photoshoot. So whats not to like? 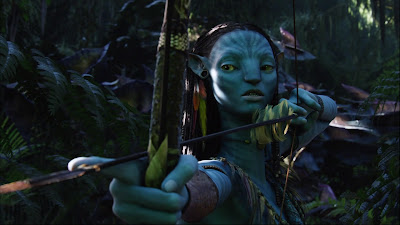 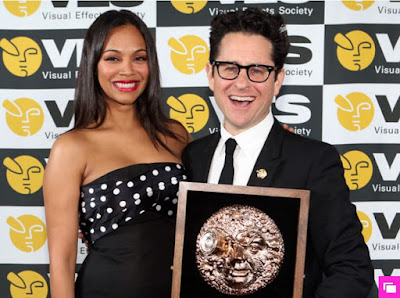 Here she is looking radiant, presenting the reigning King of Geekdom (J.J. Abrams) with a Visual Effects Award at the 13th annual VES Awards in 2015. Don't they look cute together?

Zoe Saldana is one hot mamma! She gave birth to her twin boys Cy and Bowie just over a year ago.

J.J.Abrams VES Award is a golden plaque displaying George Melies "A Trip To The Moon" 12 minutes long Melie used every visual effect in his film to excite and delight with sets, models and double exposure - all dating back to 1902.

The final result is a fantastic journey and trip to the moon. So why not start building a machine to explore and seek out new lifeforms?

Live long and Prosper.
Posted by SpacerGuy at October 05, 2016 5 comments: