Isaac Asimov, (lifelong friend of Gene Roddenberry) had this to say at a NYC Star Trek Convention in 1973 which I believe you'll find fascinating.

They (producers/actors) speak about the mission of the USS Enterprise NCC-1701 being to boldly go (a split infinitive I heard every single time) to boldly go where no man has ever gone before. 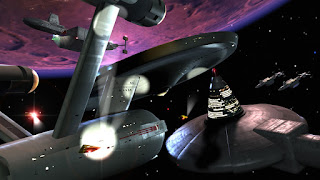 They (Paramount Pictures/Gene Roddenberry) mean it primarily I suppose, "territorially" they're visiting stars that no man has till then, ever visited. The crew of the starship Enterprise are going through vast distances (at warpspeed 😁) no man has ever penetrated.

In addition here is a brave crew encountering problems that man has not faced. Star Trek really presented the Brotherhood of intelligence (Federation/Starfleet), it mattered not what form the intelligence (lifeforms) took or what kind of universe the intelligence built for it.

In over 50 years the USS Enterprise has been upgraded, defended and battled it out while meeting new lifeforms. The quest for knowledge continues while keeping the peace in the galaxy.

Does Captain Picard chit chatting with Romulans in Star Trek Picard sit well with you?

STAR TREK PICARD - THE END IS THE BEGINNING

He tells Raffi outside Starfleet H.Q. the news from banned, dismantled synths and halted research but why would the Tal Shiar attack attack a (synthetic?) fleet designed to protect them? states Admiral Picard and yeah he got canned so its easy to see trekkers. Isn't it? Starfleet is guilty of hiding something. News of Picards resignation got Raffi fired so its clear why she was cheezed off.

Its a great story and one which leaves millions of Romulans on their home planet up sh*t creek facing a super nova, haha Ah but no, c'mon seriously lets be decent. Even though Starfleets seems to have adopted an crap attitude cursing our pointy eared Romulan friends to burn (given the Mars attack) was all the excuse Starfleet needed.


Why is the Federation turning its backs? Some say, Starfleet used to be heralded as the perfect driving force for "we come in peace" in the galaxy but Picard is really undoing 54 years of unity in the Federation. Why I hear you cry? To begin we have secret Romulan assassins operating on Earth which is an interesting sub-plot in episode 3.

It has been voiced that patrick Stewart took on Star Trek Picard because he believed the show could represent the current world we live in the wake of Brexit and Donald Trumps presidency. Theres a guy on youtube who says " This opening definitely hammers that home with a government more interested in helping itself than people who may end up emigrating to Earth, so what do think my trekker friends?

2368 has been working aboard the borg cube and mentoring Soji who is adept at communicating to nameless borg humanoids owing in part to her android capabilities which she is unaware. 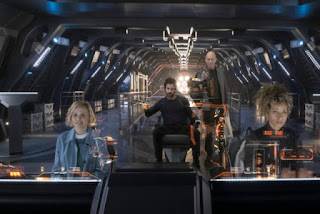 Do you think Bruce Maddox created Soji?
Will STP producers ressurect Data from Soji positronic "DNA"?
Which is your favorite ST picard episode?
Bet you love the ending, engage! It was obvious he was going to say it!
Seven and Data....

Live Long and Prosper.
Posted by SpacerGuy at February 10, 2020 7 comments:

Hi trekker friends - Celebrating First Contact Day Star Trek Picard begins this 2nd episode with the "holiday" crew at Utopia Planitia Shipyards cracking jokes, so what could possibly go wrong? So much was right about Mars with the USS Enterprise NCC 1701-D in orbit. Theres a lot of exciting, fascinating story in Maps and legend with the Romulans up to no good hatching their evil plans aboard that borg cube.

Meanwhile Mr Pinkerton lets the synthetic lifeforms out for work duties. These fellow "synths" have the freedom to work within the perimeter of the space station because until the incident, androids etc were tried, tested and trusted! So far so good until one of  the humanoids says something really dumb-ass and mean. Sheesh - thats wiseguys for you! If you've been watching so far it was like F8 had a knee-jerk reaction.

"He creeps me out" says one female earthie within earshot of him. This is not good... not good at all... cos like what other explanation is there? How should you react to an unfriendly remark or continual smear campaign against your good character? and all you do everyday is work hard? F8 then begins to compromise other synthetics and renders the Shipyard defenceless by lowering the shields. Its like plastic guy had a total meltdown, clearly F8 is having a very bad day.

After creating mayhem by unleashing the deadly Mars defense grid upon itself and murdering Utopia's staff, F8 turns a gun on himself, sniff. So what in Mars went wrong?

PICARD: She came here to find safety, I owe it to her to find out who killed her and why.


So Picard goes to Starfleet HQ to enlist admiral Clancy's help and give him a ship - instead he gets a swift kick up the rear end, haha.

PICARD "I was standing up for the Federation for what it represents! For what it should STILL represent!"


CLANCY "How dare you lecture me!"


"This is no longer your house, Jean-Luc, so do what you're good at: go home. Request denied."

QUESTIONS
Can Picard find out who killed Dahj and Why?
Deep fear and loathing of artificial intelligence and synthetic life is justified!
Were the Romulan right to eliminate all androids and synthetics?
The ban on cybernetics is justified or without cause?
Will we see Data resurrected by using a piece of Soji positronic software?