M is for Mind Games.

Its a big universe trekkies so don't let Ktarians get hold of you.. Its good to keep an open mind when travelling the galaxy but you never know who you might meet. In Star Trek, certain species can control our minds or even read our thoughts! Resisting mind control while awake is an art  but when you're asleep, boom watch out!!! 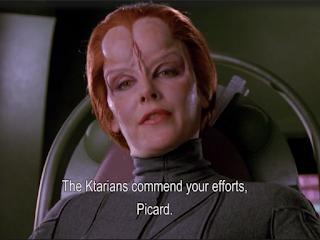 The Ktarian headset game was brought to the USS Enterprise NCC 1701-D by commander Riker himself. the whole idea was to get everyone addicted so the Ktarians could take over the Enterprise-D and then the Federation.

Star Trek's TNG The Game stars Ashley Judd who plays Robin Leftler with TNG cast in this fun and games mystery. At first something just doesn't quite add up figures Wesley Crusher so he tells his babe in Ten Forward.....

Robins character was ranked as the 71st most important character of Starfleet within the Star Trek science fiction universe. The game device stimulates part of the pleasure brain making the user want nothing except to play hooking the crew who become addicts. Whats fun about this episode is the adult staff are chasing Crusher and Lefler around the ship because the kids have figured out "the game" is dangerous.

What games do you enjoy playing?

So it's like getting to play a drug dealer...

Those damn Ktarians! It's too bad we don't have agony booths like in the mirror universe, cause those people need some real punishment!

Robin Lefler is one of my all time favorite guest characters. I loved the whole "Lefler's laws" idea, where she had this list of rules that she follows, like a personal code of conduct. Cool concept for a character.

I heard a rumor that Lefler and Wesley were supposed to appear together as husband and wife in Star Trek: Nemesis, but Ashley Judd's schedule didn't work out. So instead, we just got that cameo appearance of Wesley by himself.

This is a favorite episode of my wife and I. To this day we still make comments about the Game.

It is so easy to become addicted to games. Of course it was the kids that figured it out ;)

I hated this episode. They all looked like they were having mini orgasms.

Hahaha yeah, I never did blog about it until now