Commander Data of the U.S.S. Enterprise NCC 1701-D in Star Trek TNG is a sentient android. This synthetic re-creation of an advanced human being was modelled on one of cybernetics greatest minds. Doctor Noonien Soong and built around 2336. The androids collection of sophisticated neural nets and heuristic algorithms elevated him beyond the mere status of a machine. 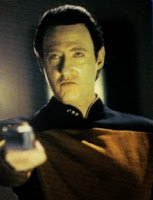 Data was the fifth successful android devoid of emotions and cruelty exhibited by his "evil, emotional" brother Lore. Data has superior construction, is stronger, more intelligent and is designed to live an indefinite lifespan.

His extraordinary abilities include mental and physical tasks, governed by an ethical subroutine which has excelled him in Starfleet to Operations Manager aboard the U.S.S. Enterprise-D. Data has a distinguished record of service in Starfleet. His impressive array of medals and awards include decorations for honor, commendations for gallantry, the Star Cross, Starfleet Medal of Honor (with Clusters) and the Legion of Honour.

Captain Picard of the Enterprise-D depended heavily on his immortal androids advice and help in starship operations, however its a hoot to hear Data's precise calculations annoying Picard, who more or less tells him to shut up. Dr Soong is Data's creator and father. Data has a pulse and a circulatory system that distributes biochemical lubricants and regulates microhydraulic power. His respiration system is responsible for thermal regulation. 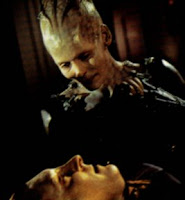 Data is brilliant and resembles a real, living, breathing, talking, humanoid, however in Star trek Nemisis he survived the vacuum of space in a successful attempt to rescue his captain Jean Luc Picard from the evil Shinzon.

He is also capable of operating in an environment hazardous to organic carbon life forms such as the one in the movie "First Contact" when a coolant leak snuffed out the Borg Queen and melted all organic life within main engineering. Luckily Captain Picard climbed to safety! Yay! Shame about the Queen.

Our immortal heroes life ended in 2379, when in a bid to save the Enterprise-E from thalaron radiation, the Operations Manager blew the Scimitar and himself to bits. Everyone was saddened by the loss. Our heroic android, Data is sensationally played by Brent Spiner and unequalled in the world of science fiction. Brent Spiner is popular, has a huge fanbase as confirmed by the BBC and is loved by the fans. (Please come back and do another Star Trek movie Brent!)

Data is constructed out of approximately 24.6kg of tripolymer composites and 11.8kg of molybdenum-cobalt alloys, with a polyalloy upper spine support and a skull of cortenide and duranium, all covered by 1.3kg of skin bioplast sheeting. Thats 37.7kg!

Our metal friend is one heavy dude and tough guy who can beat Klingons and Borgs hands-down in combat. He is far faster and stronger than any living being in history. Even Lt Commander Worf is no match for Starfleet's superior being. He is strong enough to lift Worf over his head. Believe it, nor does he require food or need sleep. Data never feels tired or gets angry with people. 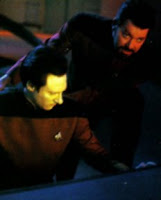 Rust doesnt affect Dr Soong's creation however people do. Starfleets exclusive android strives to be more than what he is, and human relationships are an emotional problem for him. The reason he gives to Geordi is logical.
"I will never exceed the sum of my programming, will you help me Geordi?"

Im 2371, Data has been equipped with an emotion chip which later malfunctions and becomes fused. He experiences a whole host of human emotions from happiness to sadness, remorse, anger, hate and fear. When fear is near data can turn off his emotion . Captain Picard has confessed
"Data, there are times when I envy you" - Picard. 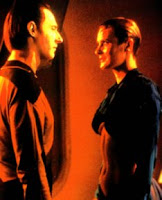 Dr Noonien Soong's most impressive feat of engineering is the creation of a stable positronic brain which allows his ethical son the memory capacity of 800 quadrillion bits and a total linear computational speed rate of 60 trillion operations per second. Data has far exceeded his human friends with his superior abilities but he'd gladly give it up to be human.

Once information has been asimilated into the androids mind, he never forgets it. When he played the self important Sirna Kolrami, Master Strategist at his game Strategema, second time round, Data was able to rely on his fast recall and experiences from the first game and logically computed the best course of action to wipe that smug smile off Kolrami's face. Data wiped the floor with Kolrami. Yessss! Yee-ha! You won Data, Yay! everyone was delighted.

His ability to process a large number of thoughts at once is extremely valuable. Kolrami of course had never been defeated (even though it was a stalemate) and felt humiliated. The fact the Master Strategist could'nt beat Data meant he'd lost in his mind.
"You've made a mockery of me" he said and stormed off.

Data's impressive positronic brain allows him to interface with other computer systems. He is able to connect directly to the U.S.S. Enterprise NCC-1701-D and control ship systems from main engineering. The Enterprise's android has also interfaced with a partially mechanical Locutus of Borg and learnt how to defeat the Borg by communicating with Picard. He sends a signal telling the collective to go to sleep, saving the Enterprise-D from total destruction with the Borg.

Measure of a Man is a very special turning point for Data. His civil rights as a sentient being are called into question but thanks to Captain Picard's defense and the presiding officer Captain Phillipa Louvois' ruling that Data is a sentient being, a precedant is set for all artifical lifeforms entitling them to civil rights granted under the United Federation of Planets.

Live Long and Prosper! Enjoy Your Star Trekking!
Posted by SpacerGuy at March 01, 2007