The trekkie and darkside ravers on Youtube are funny. It seems the endless Star Trek vs Star Wars debate will never end. Two spaceships are facing each other in a battle for their very lives. 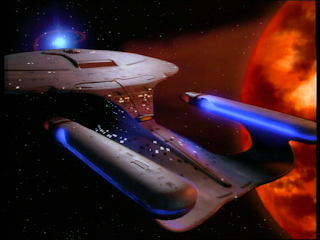 Which one will reign supreme over the galaxy? Could it be Picard's Enterprise of the Federation or Darth Vader's Imperial Star Destroyer? One way to settle this is perhaps by analysing the spaceships firepower, like the fanboys are doing on Youtube except how can a Trek or Empire sci fi addict be objective about this? So Never underestimate the Power of the Dark side! right?
wrong! We always question darkside reasoning. Captain Picard's Galaxy Class Enterprise NCC 1701-D photon torpedoes can be fired in concert with its phasers. This is the Federation's Flagship, our pride and joy for most Star Trek TNG fans. It carries a full payload of 275 torpedoes. One of these Federation sweeties has an explosive yield of up to 64 megatons. Multiply that by a maximum of up to ten photon torpedoes. That equals 644 megatons of power fired in successive pattern, after the phasers have melted the enemy's target's defense shields. That should make one helluva kaaa-booom! Yeah!! Blow that sucker. Woo Hoo!!!

Except theres one problem. I've uncovered spaceship specifications which makes for interesting reading and I'm sure Galactic Empire enthusiasts will, enjoy the news. So here it comes.

Jango Fett's small patrol craft is a Star Wars ship of the Galactic Empire of even technological magnitude, to compare against the United Federation of Planets Galaxy Class Enterprise NCC 1701-D. I know this is like admitting defeat trekkies but what if Picards flagship is outmatched by Fetts ship? Starfleet code of honour won't protect us thats for sure. I watch Star Trek and try to imagine a happy, untroubled 24th century timeline for humanoids. Millions of fans love Star Trek and Star Wars. Its true. So trekkies, lets put down our phasers and not take these spaceship specs to heart even if the Jango Fetts starship specs are based on mere speculation.

On the face of it Picard manages to bag one of the bad guys! Does'nt that mean the Enterprise-D busted the Empire up? Darth Vader will need to regroup his troops for the next battle, I wonder why Jango Fett's spaceship did'nt come to the rescue?


Merry Christmas Trekkies and may the Force go with the Galactic Empire. 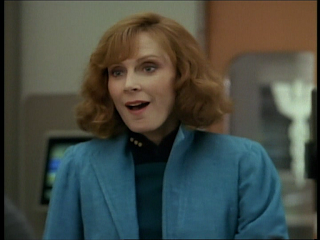 1. Which sci fi series did De forrest Kelley star in? 2. In what sort of home does Ben Kenobi live?
3. What is the name of Blake 7's apologetic computer?
4. What planet were the rebels on before Darth Vader destroyed their base in The Empire Strikes Back?
5. Who had a father called Jor-El?
6. In which state does Invasion of The Body Snatchers take place?

7. Who is Luke Skywalkers's squadron commander in the final battle in Star Wars?
8. In what episode is Data's cat first seen in Star Trek The Next Generation and what is her real name?
9. What is the name of the robot in forbidden planet?
10. What retired admiral launched a witch-hunt aboard the U.S.S. Enterprise NCC 1701 that questioned the loyalty of the crew?
11. Which film has the line - "Houston, we have a problem!"?
12. Who beat Worf's best score in the phaser range?
13. Why did Wesley lose his cool with his mom in Star Trek's TNG Evolution episode? 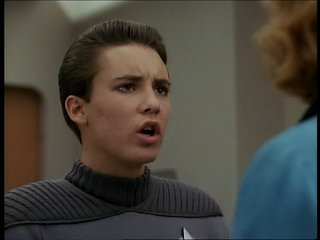 In Star Trek's Sins of the Father Robert O' Reilly a.k.a. Gowron plays one of the most influential sci fi warriors of all time. I'd like to say science fiction heroes, but Klingon history has recorded Gowron's miscreant deeds, nevertheless this rascal is still one of my trek favourites. Captain Picard's choice for the Chancellor of Qo'noS (pronounced Kronos) stood in Gowron's favour who was a great believer in politics and honour. The other contender for the leadership, Duras the traitor, got snuffed out by d'akturak (iceman) Worf for killing K'Ehleyr, which was hardly surprising. But it was a shocking surprise when the Klingon High Commander K'mpec took ill from poisoned Veridem Six. bloodwine. 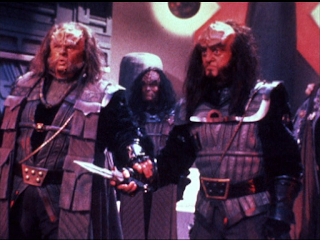 Victory was within Gowron's reach and the Empire was his there for the taking! No-body was going to stand in way except for the human Picard, observing Klingon tradition. A "no contest" fight on his hands was a sure win for Gowron but Picard had to stall for time in order to discover which one of the contenders murdered K'mpec! That left one little P'atk problem to be resolved but until the winner was declared by Captain Picard, Duras and Gowron would never rest easy with a treacherous murderer on the loose.

K'mpec's successor maintained his grip on power by undermining potential political opponents like Martok (he was Gowron's Military Defence Advisor) and challengers to his leadership like Toral but.. General Martok's rise to fame with the adoration of the Klingon people came as a rude awakening to Gowron. Gowron expressed his reasoning in a fiery, confrontational manner but it was his ruthless military tactics that finally became his undoing..

Despite Martok's glorious war campaigns, Gowron sought to assert his leadership with severe battle strategies against the Dominion with Martok as the fall guy. The loss of Klingon lives was dear but Gowron was beyond caring. The taste of power was sweet and the stakes were high. The Klingon Empire was expanding everywhere and Klingons were expendable.... But so what? Klingons consider it an honour to die in battle. "Better to die on your feet than live on your knees"

The Klingon chancellor's dishonourable actions called for an explosive challenge from General Martok which passed to Worf also of the House of Martok. General Martok refused to engage in combat with his Ruler, Gowron, Leader of the High Council and Chancellor of the Klingon Empire. Worf saw differently and in 2375, the flash of the bat'leth blades ensued. Worf silenced Gowron for good which ended his territorial reign in the quadrant and saw Martok installed as Chancellor Of the Klingon Empire.

"Hail Martok, leader of the Empire! Leader of destiny." -- Worf