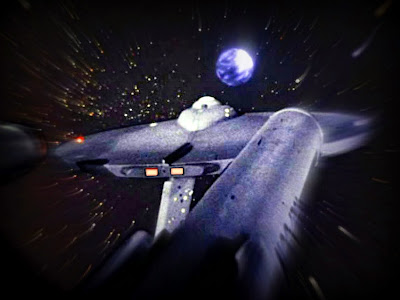 Why does Science Fiction flow through our veins? When I look back on Kirk, Spock and Dr Mc Coy's adventures in Star Trek's classic series seeking out new lifeforms on new civilisations, I realise I am one of millions of fans experiencing pure unforgettable joy.

Look at this scratchy old picture of the USS Enterprise NCC 1701. Now put yourself in a shuttlecraft following her at warp speed.

In my youth I loved watching cosmic starlines whizzing by especially when the starship USS Enterprise NCC 1701 was in full speed pursuit of the bad guys in the enemy alien ship. I've tweaked the photo so we can enjoy the awesomeness of the USS Enterprise in a high speed race, hehe. I still get weird sensations when Kirk orders the impossible from Scotty pushing the warp engines to breaking limit. Despite his tough task master Scotty has a secret formula.
GEORDI "I told the Captain I would have this diagnostic done in an hour."
SCOTTY "And how long will it really take you?"
GEORDI "An hour!"
SCOTTY "Oh, you didn't tell him how long it would really take, did you?"
GEORDI "Of course I did."
SCOTTY "Oh, laddie, you have a lot to learn if you want people to think of you as a miracle worker."

SCOTTY "Starship captains are like children. They want everything right now and they want it their way. The secret is to give them what they need, not what they want.' 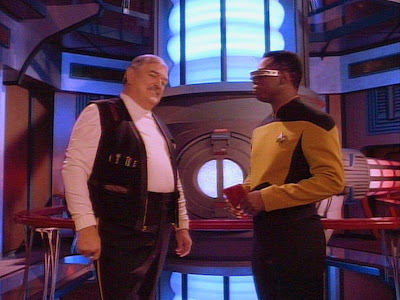 When I was little I believed Star Trek was real. It just had to be! At first I puzzled over why so many black scratches flickered over the tv set.

Ahh Haa! I told myself the camera lens was getting dirty from space dust!

Mr Spock would be proud of my pure logical reasoning because space is a dusty place. Awe sets in and my fears for the film crew soon dissolve. It was logical to presuppose that a camera guy was somewhere behind the scenes in zero space gravity doing a tough job. My admiration for the dude filming Kirk's flagship switched to sheer amazement.

Isn't he great, without him there'd be no Star Trek!!!

More black scratches flickered over the tv screen which I accepted as actual space phenomena encountered by the Enterprise on her heroic missions. I grew to love these mysterious encounters because in a way it was like seeing UFOs for real, hehe. One thing was clear in my young mind. Now we have scientific evidence caught on camera!

I got excited at the prospect of the USS Enterprise running into more alien anomalies but what about the camera guy? It was only a matter of time before the klingons would show which meant only one thing.

I soon forgot about the camera guy and besides the Enterprise was way too fast. The film crew were probably in direct contact with Scotty I mused. The Klingons will never catch up either because Mr Spock's too smart and Scotty knows his engines inside out.

Are the public ready to know and accept Alien Anomalies as real life UFO's from strange new worlds?
Posted by SpacerGuy at June 23, 2012

We wanted to believe it was real, didn't we?
Seen the video before - really wild.

Totally Alex. Star Trek is a dream that became a reality which spread throughout the stars.....words spoken by William Shatner which for millions watching meant just that. We lived, eat, slept and dreamt about Star Trek every week! LOL.

I don't think we could handle the truth. That Scotty line was one of my favorites.

Hey your first line sounds like something Scotty might say, Maurice. It was always Scotty who saved the day when Captain Kirk plunged the Enterprise headlong into trouble. Good ol' Scotty.

Captain she can't take much more of this! If she goes any faster she'll blow up!

I'm stopping by to let you know that you've been tagged in today's blog post.

I always thought Star Trek was stupid when I was younger. I can appreciate more nowadays.

I'm usually skeptical of UFO sightings and UFO conspiracy theories, but that video has some pretty compelling images. The statements from NASA astronauts were also something of a surprise.

Thanks for the tag L.G. I'm working on that now.

Robert Orci recently confirmed on Cinema Blend that Star Trek's sequel will not have Gary Mitchell, Charlie X, Ruk, and the Borg appearing as villains. Its interesting Filmmakers have denied Khan Noonien Singh's involvement but Orci didn't and we still don't have a title for our movie! Go Figure!

This footage begs the bigger question, James. How much does the DOD and NASA really know and WHY are they keeping ordinary folk in the dark? This video really proves something is out there. I expect the MIB have their work cut out for them, hehe.