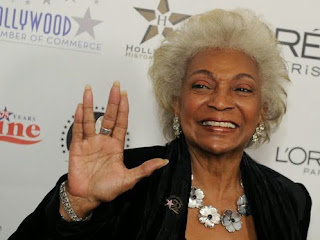 In 1966 Nichelle Nichols starred as Lt Nyota Uhura for three seasons in Star Trek's classic series going boldly where no woman has gone before. Heres the audio with Nichelle Nichol's telling her story, its quite fascinating really. For some reason the stars were smiling on Nichelle that faithful weekend when she ran into her biggest fan, Martin Luther King at a Los Angeles NAACP dinner.

During conversation it emerged Nichelle had decided to close her hailing frequencies once and for all. The news didn't go down well with Gene Roddenberry or Martin Luther King who told Nichelle the stark facts of reality. In essense Uhura's character was too important! She showed the nation on tv a universe where African-Americans were seen as they should be seen, Equals. She couldn't abandon the Enterprise now!
Hailing Frequencies Open, trekkers.

He really believed in a freedom, equality and the American dream.

Dr. King saved Star trek! He should get a role in the next movie.

Martin Luther King was legendary. He inspired greater social justice for all Americans. We owe a huge debt of thanks to Dr King.

Interesting. I'd heard this story before but never from her own lips. Thanks for sharing!

Your welcome Sean. Nichelle Nichol's interviews tell us alot about the times.