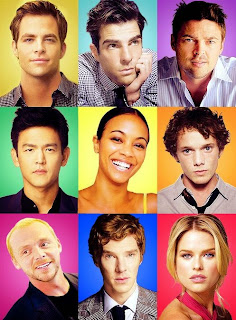 Recently Robert Orci confirmed that Benedict Cumberbatch isn't playing Gary Mitchell in Star Trek's 2013 movie sequel. In his interview with Trekmovie Robert Orci brings us up to warpspeed. For now Star Trek's writers are trying their best not to talk about who Benedict Cumberbatch is playing. You have to hand it to them. This kind of movie chicanery builds more intense trek suspense.

In his exclusive interview he reveals some spoilers about Star Trek 2013 new characters cleverly diverting us away from Karl Urban's villainous statement. Heres what we know.

1. We can expect our first sequel trailer to be rolled out in the fall.
2. Trek's writers are down to final names for the movie.
3. Alice Eve is playing a Canon Character.
4. Noel Clarke and Nanzeen Contractor are New Characters.
5. Peter Weller and Joseph Gatt are New Characters too.
6. and the Biggie...Benedict Cumberbatch is playing a Canon Character!
7. The identity of Star Trek's villain is still Top Secret.
8. We do know Alice Eve and Cumberbatch will be playing unique characters from Star Trek the original series!
9. Some have said over at the studio that Star Trek's sequel is better than the prequel.
10. Gary Mitchell isn't a runner but what about Khan?
11. ILM are adding the special effects right now.
12. Team Abrams are trying to preserve the movie experience by keeping it under wraps for as long as possible!
13. We will see James T. Kirk calling the shots from the USS Enterprise captain's chair.
14. Star Trek 2013 will be shot in 3D format.

ScienceFiction.com suspect 'Karl Urban of having punked fans. So there you have it trekinators. In the good spirit of star trek we got punk'd, good, hehe.
Theorize long and prosper, trekinators.
Posted by SpacerGuy at July 20, 2012

2013 sounds so far in the future - but crap, that's next year!
I think this was the ONLY movie I didn't see a trailer for before Dark Knight Rises this afternoon. (As in, there were at least ten of them!)

The word is ILM is adding special effect sequences which will probably be ready in a month. Fingers crossed, we'll get our cool trek trailer soon, Alex

I don't know if we should believe these denials.

You got me with the Dark Knight, Tony. I guess your gonna have to trust your gut instincts on Star Trek.

I am pumped for this movie...I think I WANT to know who Cumberbatch is playing but then again...

The movie has me totally amped too Mock. The villain could still be Khan?

I don't even care who the villian is, I just can't wait. I wish I could cryo sleep and wake up tomorrow for the opening.

Maybe its Gary Seven and his secretary?