Three years before Bond girl Xenia Onatopp, Famke Janssen guest starred in Star Trek The Next Generation, The Perfect Mate. You may recal she played the beautiful Kriosian Empath, Kamala who makes a rather lasting impression as a cracking "empathic metamorph." Kamala senses her mates desires which is what makes her so alluring. Can Captain Picard like resist her charms? You decide. 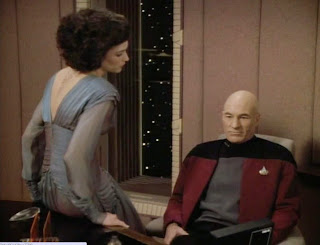 "Nothing, Nothing lies beneath. I'm really quite dull. I fall asleep each night with an old book in my hands."
"When a metamorph finds you interesting, do not take it lightly."
"Oh, I'm not taking it lightly, I'm just trying... to be as dull as possible."


The story goes Kamala has been prepared since birth to bond with Alrik, the ruthless ruler of Valt Minor. The hope is her "bonding" will bring peace between two wartorn worlds. Its such a shame really because Kamala has such a beautiful spirit and personality. Famke Janssen is so convincing and expressive in her role as Kamala. As an empath she could sense what any dude wanted and become exactly that. So after the Ferengi incident in the cargo bay interupting her cryosleep and knocking the ancient Kriosian Ambassador senseless, Picard has to step in and spend a lot of time with Kamala. Lucky devil! 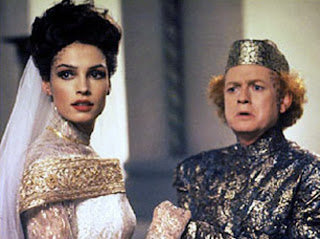 You might well ask how Captain Picard resisted Kamala's advances! Curiously Janssens spotty character makeup inspired the look of Jadzia Dax in Star Trek Deep Space Nine. Famke was actually offered the role but turned it down to concentrate on her movie career instead. She appeared in a variety of films including sexy villainess Xenia Onatopp and three turns in the X-men franchise once again opposite Patrick Stewart.

Live Long and Prosper Trekkers.
Posted by SpacerGuy at October 25, 2013