Hi Trekkers Spacerguy here. Steve Schnier stopped by not too long ago who I totally believe has earned his place in Star Trek and Sci-Fi history. I figured his Enterprise capers might cheer lots of us up so enjoy the fun. 55 years on, Earth still hasn't built a real starship USS Enterprise NCC 1701 to boldly explore and chart the galactic regions of outer space, shocking isn't it?  but have I news for you... 😁 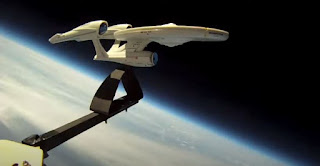 No Enterprise and its a real tragic reality, lol... except that is until now. Imagine my surprise what Steve and his wife did in 2013. Their "Enterprise" launch in Canada and filmed on youtube for posterity is magnificent! Not to be missed, we see the USS Enterprise NCC 1701 stellar ascend into the skies as the starship navigates easily soaring on her maiden flight with little turbulence thanks to Scotty in the engine room. 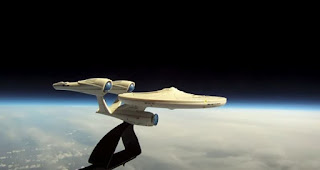 The good news is readings indicate that the ship may have reached or crossed the 100KM boundary Kármán line which is so cool. 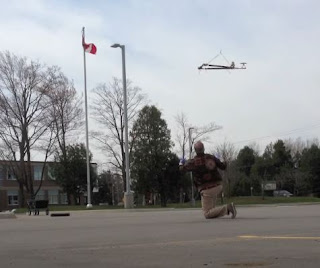 In hindsight I realise now "The U.S.S. Enterprise in Space" is such a sweet moment in Star Trek history and I was a tad tardy reporting this fascinating news, so I beg forgiveness readers. Picard would say it was "the burdens of command" (hangs head down in shame.) 😑but the show must go on! 😁 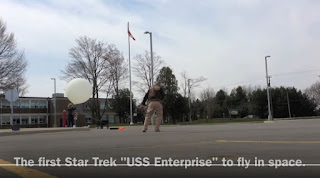 Star Trek is always exploring the outer limits which began aboard Captain James T Kirk's classic USS Enterprise NCC 1701 in 1966 (prequels and sequels aside) but this is for real!. Anyway, all joking aside heres what Steve said on Wednesday, May 08, 2013 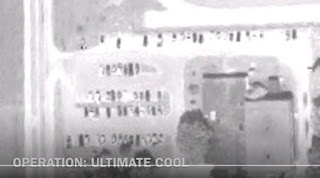 Hello! Nice blog by the way.

My name is Steve Schnier. Just a note to let you know that my wife and I sent a model of STAR TREK’s U.S.S. Enterprise into near-space via weather balloon. The payload reached a height of 95,568’ and hit a top speed of 63 knots or 117 km/hr. 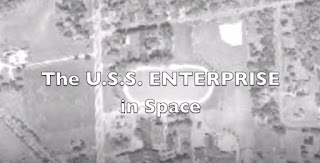 The model was launched from Stayner, Ontario (90 minutes North of Toronto) and was recovered from a remote island in Georgian Bay. It was supposed to travel South towards Toronto - but I miscalculated and it went due North. I should have paid more attention in Math Class.

Enjoy the Enterprise in Space