Hi Trekkers Spacerguy reporting. We visited Star Trek TNG "Booby Trap" P1 in 2018 so heres the scientific aspect with respect to the aceton assimilators and the slingshot for P2, You can thank Armchair Squid who stopped by last week reminding us this really is Geordi La Forges episode.

OH YES, IVE BEEN MEANING TO  THANK ARMCHAIR SQUID FOR THE SUNSHINE AWARD

On stardate 43205.6 the flagship USS Enterprise NCC 1701-D investigates a rather harmless asteroid belt near Iralius IX with relics emerging from a wartorn age. 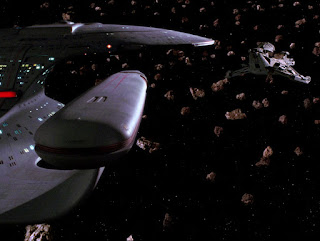 So when a Promellian battleship Cleponji appears on the Enterprise-D viewscreen, Captain Picard is excited. Well, well, well. Such a fantastic find... The alien relic itself represented "1000 years" of history which takes the starship Enterprise-D crew quite by surprise. A true floating alien museum with high tech, high spec technology for its time is one thing. So from Picards perspective so much was right about it.... until the USS Enterprise-D couldn't move... Then panic sets in...

The Menthars Aceton Assimilators. Thousands of these deadly devices mined the asteroid field. One managed to snare the Enterprise-D and drain significant energy from the ships systems. The idea was to steal enough energy generating fatal radiation to kill the crew. Thats when Geordi La Forge and Leah Brahms got to work on the holodeck. 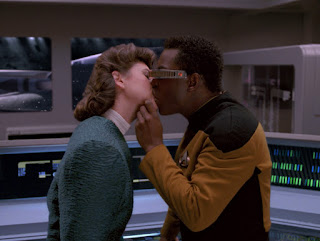 "Odds are its even money."

Geordi best guess from the holodeck gives Picard two options.. Kickstarting the Enterprise-D and shut everything off except two thrusters or turn the entire ship over to the computer. Let artificial intelligence fly the Enterprise clear of the deadly booby trap. (Only trouble was the ship might not coast far enough out of the "booby trap" so like with an A.I. in charge then eveyone's goose would be really cooked in 26 minutes which is more or less what Commander Data warbled on about while Picard flew the ship.

Which left this life and death decision down to Picard. The burdens of command. So he decided to fly the Enterprise-D with only one propeller so to speak. It was a gamble but no less risky than the "slingshot effect" in Star Trek IV. If it works great if not game over. However it did work and with Picard in control at the conn he used asteroid's gravitational pull as a slingshot to free the Enterprise-D from the Menthars Booby trap.

1. What do you think of Captain Picard's slingshot manoeuvre?

2. Whos Starship would you prefer to be on when crises hits. Captain Kirk or Captain Picard or Captain Archer or Captain Sisco or Captain Janeway's or Worfs?

3. Lets say the Enterprise-D is travelling at warp lightspeed towards a G-type star or sun instead of an Iralius asteroid.  What would happen? 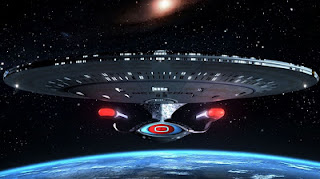