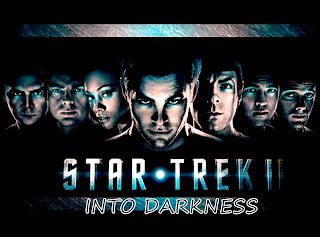 Trekmovie sources have just confirmed the title for J.J. Abrams Star Trek 2013 sequel movie. They're calling it 'Star Trek Into Darkness,' so now the word is given with Paramount's blessing, apparently. Star Trek is crossing over into the DARK SIDE!!!! CAN YOU BELIEVE IT? YESSSS! We've been waiting for this all our lives, right? It couldn't have been easy for the Team Abrams but I reckon its sounds pretty frackin' awesome and conspiratorial too. How cool is this, I mean really? Imagine a mirror, mirror verse Spock wreaking havoc on the Enterprise's young guns! And who's playing angry Spock, Leonard Nimoy, right? Okay so theres gaps in my theory which maybe you can fill in but hey it'll be worth the wait. 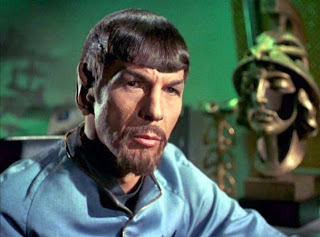 Unlike the Dark Knight, Superman and Spiderman theres really no straight forward superhero for Star Trek to cape up and save the universe. Hence the mysterious title which sounds very cloak and daggery and classified too which is great but the suspense is the real killer. I suspect we're not going to get the whole enchilada until the USS Enterprise hits the cinema theaters on May 17th 2013. So why did Paramount and Team Abrams choose 'Star Trek Into Darkness' for the title? Secrecy of course but you knew that! 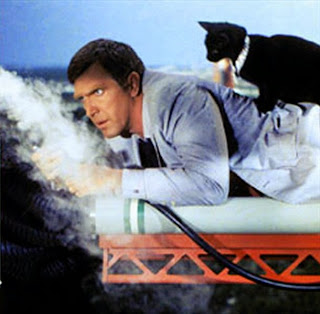 I'm guessing Star Trek's villain could be DEEP UNDERCOVER, a saboteur on a highly classified Top Secret mission sent by the Mirror-verse Empire. Perhaps this is where time travelling secret agent Gary Seven makes his rescue bid, saving the Enterprise, foiling with Evil Spock in a desperate attempt to restore the timeline before the villainous Empire defeats the friendly Federation! So far, so good but who knows? Sevens secretary played by Alice Eve? mesmerises Evil Spock by turning into a sexy feline cat giving Gary Seven enough time to zap pointy ears, hehe.


Who do you think is Star Trek's Into Darkness villain?

Heres a list to help confuse you even more, LOL but do go on, have a go! Its all for a good cause.

Trek long into darkness, Trekinators.
Posted by SpacerGuy at September 09, 2012

Technically, no "the" in the title. It's just "Star Trek Into Darkness." Which sounds kind of genius.

So they are blending it into one phrase and no colon separating anything. Simple yet a little different as well. And sounds very mysterious! Me likey.

Thanks Tony, I'm pulling my hair out right now... LOL. What a yucky slip up. Don't you just hate that? Since the news broke....I just can't explain it, Joy but I dropped the ball didn't I? Hangs head in shame.

I'm with you Ryan, Star Trek Into Darkness rocks.

Spacerguy, thank goodness they decided to leave "Star Trek" in the title. That's a good list of candidates. Gorn would be an awesome villain.

As long as it's good, I don't think I'll have any objections.

What makes this interesting is J.J. Abrams is a self confessed Star Wars fan.

I've seen rumors that Cumberbatch is playing Kahn, but I guess we won't really know until the first trailers come out. Can't wait!

I'm so looking forward to this movie!
Nutschell
www.thewritingnut.com

I'm not enough of a Trekkie to have much opinion on this, but the version of "Beware of Darkness" by progressive rock group Spock's Beard is now running through my head.


Lee
Tossing It Out

Gary Seven! I'd forgotten about him.

Well the title is certainly intriguing. I'm sure there will be some sort of teaser released soon. Can't wait.

SQT, It'll be fun finding out thats for sure! KHAAAANNNNN!!!!!!

Me too Nutschell, either way trek2 is going to be radical.

How fascinating Arlee, Spocks Beard sounds like they're onto a great gig with Beware of Darkness.

Planet Vulcan sucked into a black hole possibly has something to do with the 'Darkness' in Star Trek's new movie title Ellie, It makes sense the plot is time travel related but we'll have to wait and see!

Obviously it will be Khan, or someone similar. I was hoping it would be spock's brother, attempting vengeance against the Romulans for destroying Volcan. At least no time travel will be in the film (hopefully). At the beginning of the movie the director should pay tribute to the USS Enterprise that served our Navy for 72 years with the utmost distinction before being decommissioned this year.

Good points Jason, we'll have to wait and see about Khan. You have to admit the directors silence has kept us constantly hungry for trek scoops. I think you'll find the big E was commissioned in 1961 but she can hold 72 planes and helicopters. I hope the USS Enterprise (CVN 65) gets an honorable mention in Star Trek Into Darkness.

Actually the first Enterprise (cv-6) was commissioned in 1935 and carried the pacific fleet through WW2- before being decomissioned in 1949. So I stand corrected the cv-6 and cvn-65 served 62 years of service.