Captain James T. Kirk never hesitates in battle. Steady Phasers, Fire! Point blank! Fire! So you've gotta wonder, which Federation captain is the superior tactician? Is it Kirk or Captain Jean Luc Picard? Stupid question, maybe, nevertheless Captain Kirk fires point blank upon a 24th century Galaxy class, Federation starship and kicks her 641 meter ass, while Mr Spock's analytical brain pores over critical tactical data relayed from his Science station. Yes, Kirk has excellent lieutenants serving aboard his wee USS Enterprise NCC 1701 289 meter starship. Pitted against their original USS Enterprise NCC 1701, this encounter proves to be more than an interesting challenge for the officers aboard the flagship USS Enterprise NCC 1701-D, with the lovely Counsellor Deanna Troi, Geordi and Data demonstrating the only sparks of eagerness to save their ship. 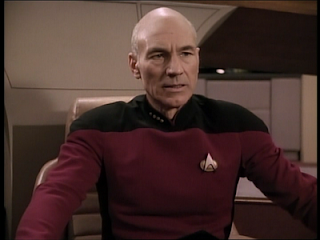 Full phasers, Fire! Kirk never disappoints but Picard is a stickler for Federation rules, regulations and proper Starfleet procedure. So what happens?
"Hail them." commands Picard.
"No response." replies Worf.
The mystery ship is on a direct flightpath bearing down on the Enterprise-D. Captain Picard asks his bridge crew for suggestions before panic defeats his bridge officers with fear. He can't afford to lose control of the situation with his opponent.
"We have to get out of here, now!" warns Deanna. Lives were at stake after all, so what does Picard do? He should have listened to the counsellor and hightailed it outta there.
Meanwhile aboard Captain Kirk's ship, Sulu is smiling and with good reason. He's on the winning side! The word is finally given by Captain Kirk. Its a direct order from the Captain instructing Sulu to attack! Fire! Lay down a pattern! Fire! The Enterprise NCC 1701 launch their battle attack against Picard's technologically advanced, state of the art, Galaxy Class starship with Captain Kirk acting on Lieutenant Uhura's honeyed words, "No authorized Federation vessels in this quadrant." as just provocation.
So what happens next? The USS Enterprise-D shields are down, frustrating Worf, leaving the flagship totally exposed to enemy attack. Captain Jean Luc Picard orders Worf to hail the mystery ship while avoiding a direct collision course with the USS Enterprise 1701. At the same time Captain Kirk's ship is closing in for the kill! The Enterprise 1701 moves in on her prey and strikes at the very heart of Captain Picard's precious Flagship, penetrating her exterior structural and atmospheric integrity fields which finally fail, seriously compromising the interlocked tritanium/duranium space frame. The Bulkheads and structural emergency forcefields buy some time but its too late. Kirk's next sequel of photon torpedoes and phaser blasts de-stabilise the USS Enterprise-D's warp core.
Captain Picard diplomatic skill were worthless because Worf is unable to contact Captain Kirk's ship! The USS Enterprise NCC 1701-D's weakness was in her command structure which took far too long to realise that Kirk's little ship could decimate them. The attack by the original Starship Constitution Class on Picard's Galaxy Class flagship was a worst case scenario. Still, I suspect The Klingons would have applauded the USS Enterprise 1701 battle tactics which followed the Klingon Code of Honor without fail. Remember, Klingon's do not take prisoners.

Notice how shocked Captain Picard is when Captain Kirk turns up the heat and phasers the beleaguered USS Enterprise NCC 1701-D into a warp core breach. Sorry.....I mean... believe me, I do respect the United Federation of Planet's greatest diplomat. But c'mon trekkies, Captain Picard's expression of defeat says it all, don't you think? Kirk seized on the moment by using his wits and phasers and outsmarted the most noted captain in space exploration, science and interstellar diplomacy, combined. Mr Spock however, failed to grasp the significance of Uhura's direct communication with Starfleet confirming "No authorized Federation vessels in this quadrant" (in the unexplored region of the Typhon Expanse.!!!) Yet, Kirk still gave the order to Fire blind, Lay down a pattern! phasering his way past a formidable, peaceful starship and snuffing out over 1000 lives. Shame on Mr Spock who also failed to recognise the matching starship registry numbers with the USS Enterprise 1701 scanners!

Fire first, questions later. It seems highly unlikely that a smaller less powerful starship annihilate Captain Picard's Galaxy Class U.S.S. Enterprise-D but watch the clip. Kirk wasted no time with the "enemy unknown" stalking it to the very end. Captain Picard must have been sweating big time! Decide for yourself and enjoy watching the battle of wits, between both captains of the Enterprise!