During a geological survey on "Surata IV" Commander Riker is jabbed in the leg by a mysterious vine on a spooky alien planet. We soon learn Riker's life is on the line unless Datas quick reflexes and Chief Engineers Geord's enhanced vision can capture the "creature" quick smart.

Meanwhile Rikers immune system is being infected by the organism. Even though he beamed up using the USS Enterprise NCC 1701-D, 24th-century transporters bio filters,  Space Age technology still failed to filter out the microbes spreading fast to No 1's brain. So now what? Is it game over for Riker? well not quite. 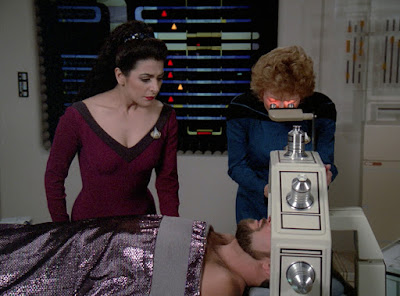 So what have we got? A sample of the infectious vine - results inconclusive. Microbes infecting Rikers nerves which can't be removed surgically. So now here's poor guy Riker, comatose hooked up to a gawd awful machine which sends electrical impulses to his brain keeping him alive. At first its hit and miss but instead of saving the dude, the impulses stimulate romantic dreams promoting the microbes growth!

Luckily Deanna is able to assist Dr Pulaski reawaken Commander Rikers darkest memories during his "comatose dream sleep." The painful death of Tasha Yar and other negative dreams, "Data some things got me!" induce different endorphins with an opposite effect on the microbes. The plan actually works but what a trip it must have been for Riker when he woke up!

Dr Beverly Crusher is the Chief Medical Officer of the USS Enterprise NCC 1701-D and a real knockout. Since her husbands departure Beverly's bond with Captain Picard developed over seven years with some sweet solo performances in Star Trek TNG series. The actress Gates McFadden also starred in 4 of Star Trek's TNG movies. To her credit Crusher embraced a historically male driven profession in Starfleet, on stardate 2364 and became a StarTrek icon after seven years doing the show.


Her performances are supreme in "The Naked Now" where Crusher is playing an emotional, illogical female with needs, who gets intoxicated by a virus on stardate 41209.2 In fact the entire crew totally lose their inhibitions and put on a stellar job "acting wasted." How the filming party kept straight faces with Crusher unbuttoning before Picard on the job saying these lines......

"My dear Captain, you owe me something!" demands Beverly in Picards Ready Room. The poor guy tries to escape and runs for the door. "You do realize that don't you? I'm a woman I haven't had the comfort of a husband, a man." she blurts out gasping between all the heavy breathing.


Remember who said "she's one sweet looking broad?" in Dixon Hill's 1941 holodeck adventure, "the Big Goodbye?" All dressed up to the nines in satin and spandex, Beverly is a real tease in this episode. She hikes her skirt up, nearly trips on her shoes, swallows gum not realizing 20th century customs, wears nylons dragged up her legs and is offered Tommy Dorsey tickets, not bad eh?

The USS Enterprise-D's secret "Dancing Doctor"   fully trained in Starfleet procedures for personal exploration where no lifeforms get to play hanky, panky and what happens? the holodeck freezes up!!!

Some say the good doctor is hot and daring to venture out as the first female Chief Medical Surgeon aboard the USS Enterprise-D starship. Crusher represents the only kind of hope to boldly engage with the unknown without a phaser.  She beams down with Starfleet military officers Data, Geordi,Riker and Chief of Security Tasha Yar to Vagra II, right into the front lines! Behold terrifying Armus. -  I mean this dude was one Bad Slime with attitude and it SPOKE! Not the sort who wanted love either!

Here are the tools of Dr Beverly Crusher's profession. These "Medical Miracles" include the most advanced Enterprise-D medical equipment and procedures practiced within the United Federation of Planets today.

1.) Captain Picard required a Cryogenic open-heart procedure used in conjunction with a fully operational sterilization field in Dr Beverly Crushers Sickbay aboard the USS Enterprise-D by Kathryn Pullasky. The simple procedure is used to repair damaged cardiac tissues using temperatures near absolute zero. Before the operation its vital to know what negative or positive markers make up the patients blood type.

2.)Medical Diagnostic Bed with the overhead scanner. Its been rumoured that NASA were facinated with the orange bed covers in The Uss Enterprise 1701 Sickbay and at the time had a good look at them. Heres TNG 24th century biobeds compare to Dr McCoys TOS 23rd Century ones.


3.)Neurocortical monitor is a small sensor device which is placed on a patients forehead to record encephalographic data. A neuro cortical monitor could also be configured to noify medical personnel when preprogrammed readings are detected.


4.)Dr Beverly's Hypospray! Never beams down without it. So now the Hypo will be used by Enterprise-D's highly trained Sickbay staff (for subcutaneous and intramuscular administration of medication) to keep Picard knocked out while he gets a new heart. The hypospray has become an inspiration for real-world engineers who have invented devices based on this "device" for extremely fine, high pressure, aerosuspension delivery system eliminating the need for needles.

5.)Dr Beverly Crushers Tricordrazine. This drug neurostimulant is usually administered subcutaneously. Trycordrazine was successfully used to stimulate neural activity in Commander William Riker when he suffered neural injury on an away mission on planet Surata IV. Tricordrazine is based on the lifesaving medical wonder drug treatment Cordrazine.


6.)The Somnetic Inducer is small neural padd recommended by Dr Crusher to induce sleep in humanoids. So when Geordi complains he's been having a bout after some brain washing to turn him into a killer assassin, the good doctor isolates a slight abnormality in the visual cortex and recommends a complete examination at Starbase 36. Does she think anymore about it? Nah We're all one big happy Enterprise family! Geordi is one of the Good Guys. So in 2367 Crusher hands La Forge a somnetic inducer to fix the malfunction in his VISOR suspected of causing him insomnia.


7.) The Medical TR-580 Tricorder is a multipurpose compact scientific device with sensors, computers and a database capable of downloading and scanning for convenience. Dr Beverly Crusher usually carries one on away missions. State of the art technology has enabled the completion of starship missions and operations successfully. Specialized tricorders are available for engineering, scientific or medical applications. Various creators have modified the design over time, Wah Chang, Brick Price, Bill George and Rick Sternbach. 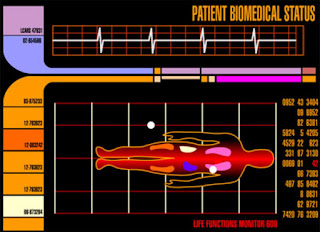 8.)Dr Crushers Sickbay computers are independent marvels of computer technology capable of analyzing and isolating complex medical problems/viruses in the 24th century. In our modern age, obtaining a vaccine is a relatively logical process of tapping into a large medical database and running a few tests.The results are fed through the sickbay labs whereby a formula is quickly processed and given to the patient.

Wow you read this far! Thanks for stopping by. I always wanted to write about the Dancing doctor, hehe.

Players and Star Trek fans can now look forward to Disruptor Beam's Star Trek Timelines must save the day in the latest month long mega event...... The video “A Good Day to Lie”, delves into iconic Klingons, bat'tehla fighting and all that great Warrior honor stuff.

Apparently, the galaxy is in chaos again.  Here's Disruptor Beams new “A Good Day to Lie” trailer, so enjoy...

As part of the Klingon fun, players have access to brand-new Klingon-themed Gauntlets, limited-time Distress Calls, and rewards, as well as many new characters such as the legendary Kortar, a mythological god-slayer with immense power.

The first of four events in the series, “Scales of Power,” started last Thursday, July 6, So now "we the players" thats us are expected to enter the fierce realm of Klingon politics after Chancellor Martok has gone missing.

In his absence, several galactic powers are vying for control of the now open seat on the Klingon High Council. Think about it. This gives Fleet captains a unique chance to steer the Klingon Empire into an age of tolerance or economic prosperity if.....you really want more power.

Subsequent events will include “When Giants Walk”, “The Heart of the Empire,” and “Blood for Blood.” 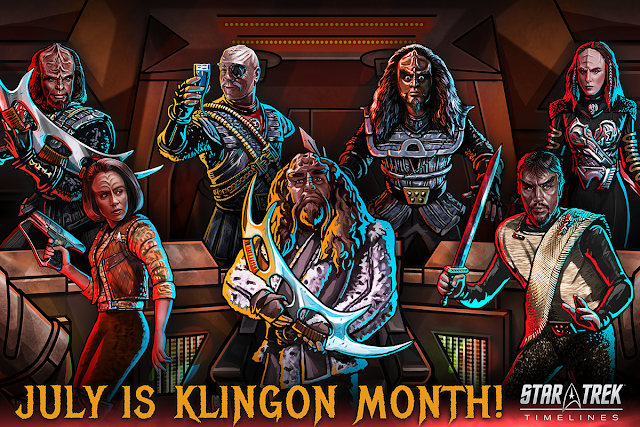 (“July is Klingon Month in Star Trek Timelines!”) translated into the Klingon language is:

Hugo Award winner, Nebula Award winner and friend of Gene Roddenberry, Isaac Asimov is considered one of the Big Three" science fiction writers of his generation with hundreds of entertaining books to his credit. Most of the sci-fi maestro's paperbacks are available on Amazon with the Foundation Trilogy in hardback also. So is Foundation any good I hear you cry? 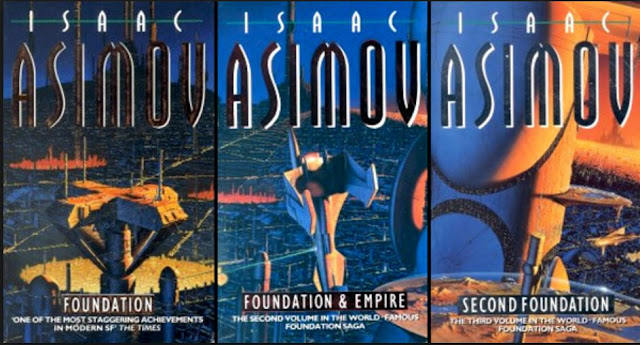 The Foundation Series is a sweet read which clearly shows the emperor's influence during the timeline. Many Science Fiction stories have a hero vs the machine - to fire our imaginations, so far I have determined that there isn't really a continuity of characters from beginning to end except for the mathematician, Hari Seldon but even he dies. There are others like his assistant, Gaal Dornick. Seldon's sidekick. His crucial discovery is so fantastic, its suppressed but during the series the mathematician is later brought to stand trial. The trilogy spans the entire galaxy and not one ET make a grand entrance. Many come and go like Emperor Cleon but I won't be a killjoy.

So if you're an Asimov fan, Geek, or Nerd you're in for a treat. While the technology appears Flash Gordon, the trekker will obviously enjoy Asimov's Futurism. His "through the lens" perspective gives a unique timeline experience covering the ages but all is not what it seems. 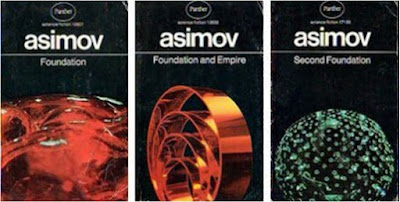 The first volume Foundation establishes the colony Terminus called The Foundation, and the various challenges and crises it has to face and solve in the increasing chaotic galactic empire.

Foundation and Empire, the second volume, deals with a new unforeseen challenge in the ascendancy of The Mule, a mutant with extraordinary powers that can enslave whole planets and even causes the collapse of the first Foundation.

The setting is in a gigantic galaxy wide empire with nuclear gadgets and offbeat vibrant effects. However, these are only interesting gizmos without too much importance to the major story regarding their function.


Gaal Dornick springs forth as a dedicated Hardcase in the beginning only to disappear mysteriously before the end. Hari Seldon is another character whose interaction held onto my curiosity because his discovery makes you think outside the box, Psychohistory Duh What?  I became an Asimov fan quite by accident when I read the Last Question, which got me started on futurism, science, technology and I've been hooked ever since.

Long Live the Foundation!
Posted by SpacerGuy at July 03, 2017 9 comments: