James Cameron's Avatar was two years ago. Doesn't time fly? The movies 3D cinematography adds plenty of sugar and spice making the virtual world of Pandora a pretty enjoyable flick for most? I think my heart was pounding during this movie because you see, I'm a sucker for lush green trees and ecosystems. So when I saw the gunships closing in on Hometree, I took it hard. It was a powerful moment seeing the Na'vis home network of life getting battered to death. Obviously this Colonel Quaritch dude is a total snake and enjoys inflicting pain and misery on people. 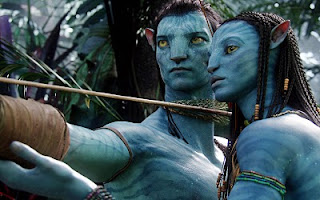 To quote Captain Jean Luc Picard, 'Its the age old cry of the oppressor against the weak' with humans doing their level best to plunder, exploit and rape worlds of resources slaughtering defenseless 'animals' in the name of progress, peace and prosperity.

The Terran master plan was simple: muscle in on Na'vi homeworld and extract the rich deposits of 'unobtainium' but first the scientists had to relocate the primitives! Grace doesn't exactly welcome Scully with open arms so one of the geeks shows him to the blue bodied avatars. The marines chance encounter with Neytiri played by Star Trek's Zoe Saldana is the start of a lasting relationship. Marine Scullys determination to defend the 10 foot Na'vi primitives from the greedy corporate looters closing in on the luminescent world of Pandora took guts. However, Neytiri soon finds out about the Terran master plan to mine 'unobtainium' from the Na'vi forest giving Jarhead Jake some major explaining to do.

The chemistry between Neytiri and Jake is evident but its obvious she feels betrayed and is seriously peeved off with him. Eventually the blue aliens take a stand against the trigger happy Colonel Quaritch who unleashes his wrath against the Na'vi and blasts their sacred woodlands with brutal firepower. This is one mean marine who takes pleasure in doing his job.

Lead female star Zoe Saldana and Sigourney Weaver along with Sam Worthington's avatars all spring into action and deliver epic performances at the heart of battle pitting their bows against wave after wave of unstoppable terrestrial bullets and bombshells.

QUESTION:  How do avatar chambers work?

Since the movie, Avatar has stirred up quite a buzz amongst environmentalists. A million trees are being planted in 15 countries worldwide because of Avatar's Hometree Initiative Isn't that great? Human lifeforms must learn to treat our little world with respect and take the issue of deforestation very seriously. TREES are the life giving 'LUNGS' of our planet earth! The sad thing is Trees are vanishing at an exceedingly alarming rate. Without Trees and healthy marine life spawning within our oceans, Earth will fail to re-oxygenate itself properly! WE'VE GOT TO TAKE ACTION NOW or our fragile coral reefs will vanish forever turning our oceans into a seafloor of mud and worms.

Go Plant a Tree Today and use less plastic!

Make it happen, Make it so, today!
Posted by SpacerGuy at September 27, 2011 No comments:

Heres a fun Star Trek record set by a supreme being which should light up the geek side of your brain! I'd like to give a huge thanks to My trekkie friend, Colm for discovering the Fastest Star Trek Movie World Record and sending it to me! The video clearly demonstrates mack naming all the Star Trek movies in faster than warp speed. Thats right! Elder spits them off in 10.5 seconds and gets them right, now thats pretty darn extraterrestrial! The dudes a space legend!!! LOL. Have a listen for yourselves. So what does Elder say at the end of the challenge? 'Nerdiest Thing Ever, thank you.

Hes quite obviously pleased with himself but isn't it interesting Mack doesn't say trekkie or trekker? Oh well, you can't have everything, maybe its time for the saurian brandy. The real question is can your Sci-Fi fierceness beat Mack Elder's Fastest Time Naming All Star Trek Movies In Chronological Order?

Theres no denying the uber sci-fi geek lurking within everyone of us, for it too must know. Next time you're hanging with some trek buddies be ready with your stopwatch and ask the question: How fast can you name all the Star Trek/Star Wars movies in chronological order?