STAR TREK PICARD - GUINAN IS BACK

Whoopi Goldberg (Oscar and Golden Globe Winner) aka Guinan aboard the starship USS Enterprise NCC 1701-D in Star Trek the Next Generation is back. Thats right. Goldberg who has massive fans across the world and her awards speak for themselves was invited by Patrick Stewart himself onto the new Star Trek series.

"Guinan" stars in Star Trek Picard opposite the character Picard "your answers are not in the stars and they never have been" which adds spiritual realism boldly going where no-one has gone before on two levels. 1) Goldberg appeared 29 times already in Star Trek TNG as Guinan centuries older and wise beyond her years. She looks great for 100 in Times Arrow 2) now here she is again with the "Picard" 400 years younger but in a different timeline.

Ido Aghayere steps into the role as Jean Luc's "oldest friend" Guinan in season 2 episode 4 in "Watcher"  She plays the divergence 2024 version of Guinan in a  timeline trekkers won't remember because the "new Guinan" timeline  hasn't occurred. The reason we know this to be true is Q (John De Lancie) has been messing around with time again up to his old tricks again!. So instead of the United Federation of Planets we see a divergence and Confederation of Planets! 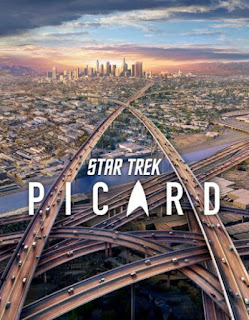 How many seasons will Star Trek Picard have?

MARCH 6, 2022 - It's looking like more and more of a certainty that Star Trek: Picard will end with just three seasons. Picard showrunner Terry Matalas shared a photo from the set over the weekend, seemingly saying goodbye “forever” to Star Trek: Picard.

In the US, Star Trek: Picard season 2 is out now on Paramount Plus, with new episodes releasing every Thursday. Viewers outside of the US can watch season 2 now on Amazon Prime Video. New episodes hit the platform every Friday, the day after they air on Paramount+.

Exclusive: Star Trek's Discovery And Picard are Coming To Netflix.

Do you think Guinan is a Time Lord like Dr Who?

Guinan has had dealings with Q and the Continuum. Why is  Q afraid of her?