Star Trek Beyond Will Mix Things Up in Its Plot, Jumping Forward in Time! is the latest scoop to hit the trekkie sphere over at Master Herald.‎ Star Trek Beyond Won't Be A Traditional Kirk-Spock Adventure according to cinemablend. Almost everyone knows poor William Shatner is not in the movie. To keep everything on track, heres Director Justin Lin's "INSIDER VIEW" on ‘Star Trek Beyond’ Criticisms: 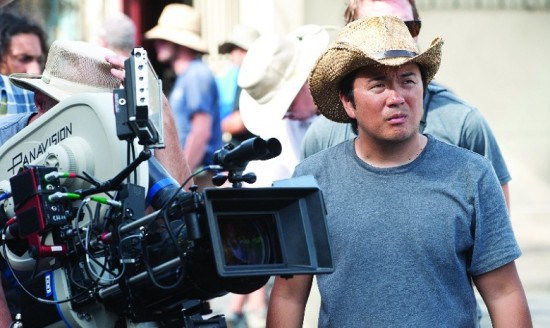 “We Are Trying to Be Bold and Take Risks” was Posted by Peter Sciretta over at Slashfilm recently. Heres a few quotes from J. Linn who explains why trek's trailer was mind boggling.... to be kind.

Well, its a minute and a half, you know… And again, there were other versions that were much more traditional and I can see where maybe the hardcore fans could probably see that as, “Oh.” But with trailers you’re putting a two-hour movie into a minute and a half, and the one thing I wanted to make sure is that it hopefully represents that we are trying to be bold and take risks, whether we are successful or not, I don’t know. That was something I was excited to do and with collaborators like Simon [Pegg] and Doug [Jung], passion for the franchise will be there regardless. So however it’s presented, yeah it’s a minute and a half, and my challenge to everyone making the trailer is about saying “let’s not go off course, I’m not afraid to share — share it, I feel like we have the goods in a two-hour run and you really do get to know the characters and hopefully the journey is great. I love it and the cast did an amazing job and the crew… and the inside baseball version of the creation of this Trek was pretty condensed in how you usually make a movie of this size. And I wanted us to be bold, I wanted us to take chances and hopefully in a minute and a half we are able to convey that.

It’s in the DNA of this canon. It was in the ’09 Trek, and we went through different iterations of the teaser and I wanted to make sure whatever here is using all the elements from the film. It’s been a part of this Kirk’s journey and so I felt it was very organic, and it will ultimately be in the finished film.

The one thing that was when I came on this [film project], I didn’t even realize how emotional my level of engagement with Trek was until the first day of preproduction when I walked into the hallway of the Enterprise and it hit me. It’s part of me but my level of engagement with Trek was really from 8 to 18, when I would watch Trek at 11 PM on channel 13 with my dad. He worked all day, closed shop at 9 PM and dinner at 10 and watched Trek. And so a lot of that is trying to create something that embraces the essence of Trek for me. Simon has a very different level of engagement, and Doug also has a very different… so it’s awesome to get in there and have those collaborators and have that discourse about how we were going to craft this movie. ‘Cause Simon, he knows EVERYTHING about Trek and it’s great to have those guys with me the whole way.

Art is the wonderful mirror of humanity..... When Chris Pine says this, Simon Pegg is seated looking at him. I have no idea how Pegg kept such a straight face but he did - right to the very end of the video - Hilarious.

He kind of tracked me down and we’re talking and I didn’t know what to expect. I thought maybe he was offering to go shoot a script that existed and he said, no, it’s yours. Go and be bold. And just take it. Be bold and make it what you think you would do to Star Trek. And the more we talked about it, the more we kept saying, well let’s keep pushing. Let’s keep pushing. And that’s when Simon kind of said, well it should be Star Trek Beyond. And it was his idea. And it was kind of came from all our conversations. And we looked at each other and like oh, that sounds like the title of this film.

And the interview goes on and on. All this awesomeness over one trailer, aren't we spoilt? For more Star Trek Beyond analysis, warp over on over to Slashfilm Page 2 and Slashfilm Page 3


Live Long and Prosper Trekkies and Trekkers!
Posted by SpacerGuy at January 25, 2016 8 comments:

Star Trek Beyond Trailer 2 has yet to beam across the galaxy. It seems Justin Lins fast and furious motorcycles, sexy aliens and bigger explosions is taking trekland by surprise.. 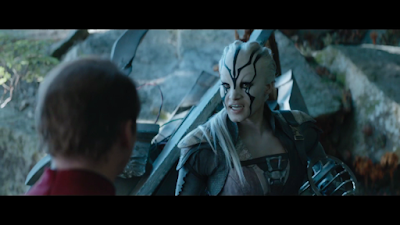 The Beastie Boys track "Sabotage" is just the beginning of all out war! Will Star Trek Beyond reignite the philosophical trekkie fundamentals of Gene Roddenberry's Star Trek or cause utter chaos? 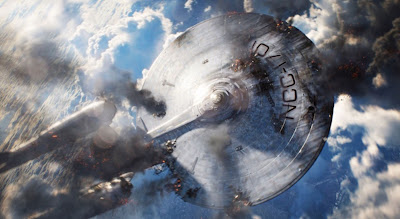 After the partial rehash of Star Wars, can Star Trek follow in Han Solo's footsteps and score big at the box office? The only hitch is William Shatner isn't in the movie. Its a real pity too because all we need is the Solo ending sending Grandpa Kirk off in style. 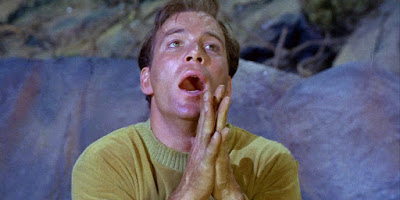 Visualize Admiral Kirk hamming it up with a stake through the heart as hes being jettisoned out an airlock, Hammer Horror style! Is less more? Was once enough? Is Galia or Uhura the most likely candidate to kill captain Kirk?

Live long and be prosperous, trekkers and trekkies.
Posted by SpacerGuy at January 18, 2016 12 comments:

Are you a trekkie, trekker or movie fan? I'm guessing you are so heres some interesting timeline facts about Star Trek Beyond! (film sequel to Star Trek Into Darkness). ST Beyond is due to be released (in REALD 3D and IMAX 3D) by Paramount Pictures on 22nd July 2016. 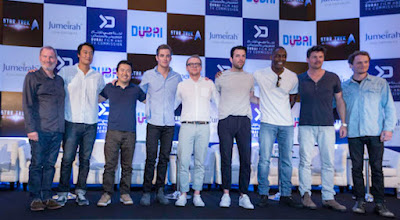 On 22 December 2014, it was announced that Justin Lin had been hired to direct Star Trek's 13th movie incarnation. 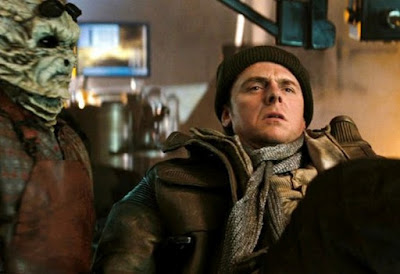 On 21 January 2015, it was announced that principal filming would start in April the 15th 2015 at Vancouver Film Studios in Vancouver, British Columbia, Canada with Simon Pegg and Doug Jung writing the film.


On 8 July 2015, Hollywood Trekstar Deep Roy was confirmed to be returning as Keenser, due to having cancelled a convention appearance for filming Star Trek Beyond.

Zoe Saldana has spoken out about Spock and Uhuras relationship. "I'm pretty sure that for this third installment, we'll be able to sort of .... be more hands-on." 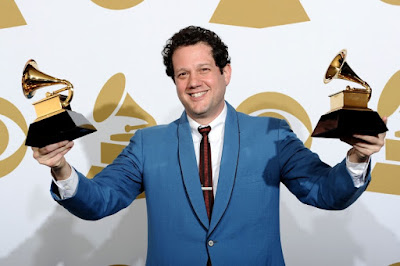 On 11 July 2015, Michael Giacchino tweeted, "So thrilled to be working with Justin Lin and the rest of the Enterprise crew on Star Trek Beyond! Let's boldly go!" 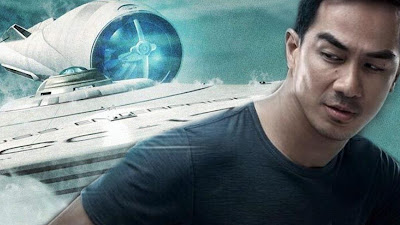 On 24 July 2015, it was announced that Joe Taslim had been cast in a key role opposite the movies villain, Idris Elba aka Kraal. On 25, 26, 29 and 30 June 2015, the production filmed scenes in Squamish Boulders, Squamish, British Columbia. 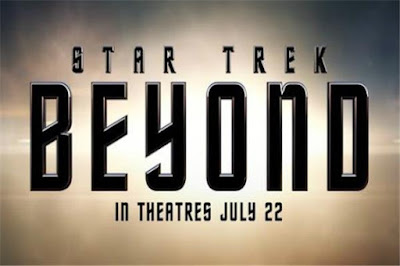 
On 14 August 2015, several set photos were published on the internet, backing the claim that a Federation starship crash landed on a planet.

On 20 August 2015, the first set photos from the filming were published by ScreenRush.com. 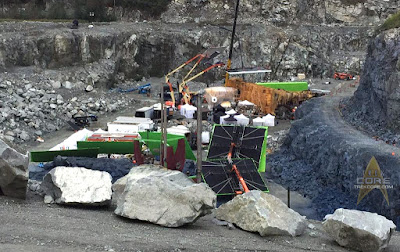 On 27 August 2015 and 29 August 2015, Twitter users reported that Star Trek Beyond was filming at Triangle Road in Richmond, BC and at the Pitt River Quarries in Red Deer, BC. 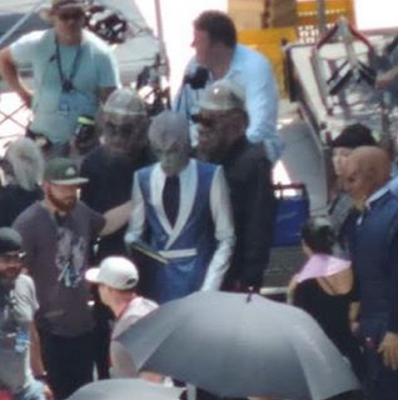 During their filming in Dubai, several set photos were posted on Twitter, Instagram and other social media sites, including several images and videos of new alien species. 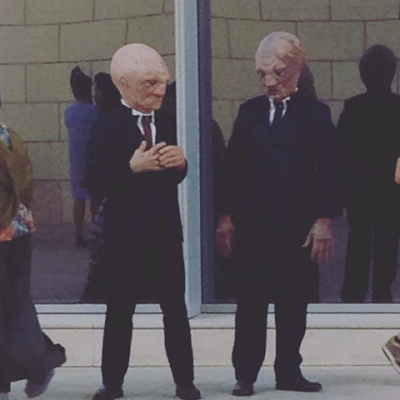 On September 2015 [102] Omaze announced Adam Horwitz as the winner of the walk-on role competition.

A trailer for the film was released online on 14 December 2015 and created quite a mixed response from fans, George Takei and Wil Wheaton.

Live Long and be prosperous, trekkers.
Posted by SpacerGuy at January 11, 2016 10 comments:

Today Trek is boldly venturing beyond the frontiers of its five year mission. Its different and a far cry from its predecessor. The official Star Trek Beyond trailer is an awesome one minute and 34 seconds long now beaming teasers all over the nation. The bad news is the Federations battlecruiser the USS Enterprise NCC 1701 is totalled beyond salvage - shes gone.... So now, villainous Kraal (Idris Elba) emerges from beyond the shadows on an alien world! Its payback time with Captain Kirk's crew on the run.

So I'm reserving judgement until Star Trek Beyond premières on July 22nd 2016. I have to admit, despite mixed reactions Star Trek's movie trailer has raised lots of questions.

1. Did Kraal send the hostile "swarms" to attack the USS Enterprise NCC 1701?
2. Who put the beastie boy music on loudspeaker - Scotty or Captain Kirk?
3. No ship, No crew, how are we going to get out of this one? How many Enterprise crew survived?
4. Is Mr Spock fatally wounded?
5. Whos closing in on Dr McCoy and Spock's co-ordinates in the planets rocky region?
6. Who beamed Spock up to safety from the surface of the alien planet? and to where?
7. Does Star Trek need cute and cuddly aliens in fur and feathers to give the movie colorful meaningful mayhem like Star Wars? 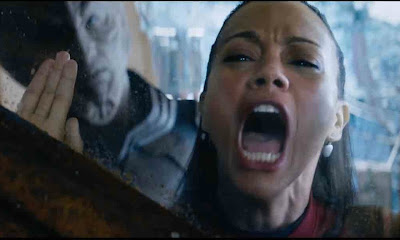 8. Has Kaylah got special alien powers? "I know why you're here"
9. Why is captain Kirk propelling himself into the air on a motorbike? "What the h*ll is this?"
10.Is Kraal upset about the expansion of the United Federation of Planets? Captain -This is where the frontier pushes back!
11. Why is Uhura screaming with the grey alien watching her?
12. Why is Hikaru Sulu, pilot of the USS Enterprise NCC 1701 wearing a seatbelt?
13. Whats the verdict, Kirk or Kraal? Hero or Villain - who do you want to see push back the frontier?

What did you like about Star Trek's teaser trailer? Who's your favorite Star Trek Beyond character? Why do you think Uhura is pressed against a window crying her lungs out?

Live Long and be prosperous, Trekkies, Trekkers and Movie Fans!
Posted by SpacerGuy at January 04, 2016 12 comments: 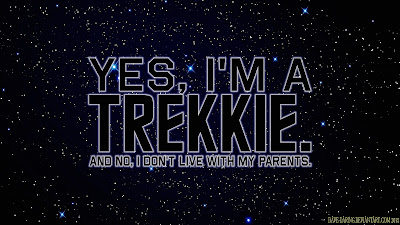 Happy New Year, eveyone! I discovered a fascinating resource at TrekToday. Top 50 Blogs For Trekkies was created by Star Trek fans studying at the Radiology Technician School in the United States. When this record of trekkie blogs disappeared I resurrected it - to trek out and be prosperous. All joking aside, Star Trek Sci Fi Blog is listed at No7! .... 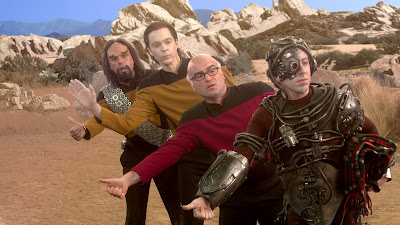 I don't mind telling you, its been a trip sharing the limelight with my Star Trek heroes. Check out the big names. You can read a summary of "Top Fifty Blogs for Trekkies" at TrekToday or catch the full scoop here. Thanks Trekkies far and wide for hailing us beyond your corner of the alpha quadrant. Do you love the Big Bang?

Is it luck, affliction or love of Science Fiction?