Axanar Productions, the kickstarter production company have settled with Paramount Pictures and CBS Studios in the Star Trek copyright infringement lawsuit. The trouble began in 2015 after filmmaker Axanar shared some movie plans giving a Star Trek teaser shown at San Diego Comic Con in 2014. News of the "four year war" erupting between the Federation of Planets and the Klingon Empire is exciting news in Star Trek. All the rest is in the video.

Its hardly surprising Paramount and CBS Studios found out. So now speculation is mounting over at Deadline.com pointing to the CBS All Access series Star Trek: Discovery covering the same material. 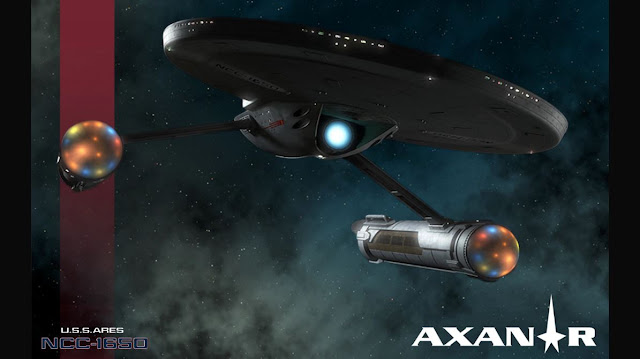 On January 4th a Federal judge denied "FAIR USE" as a defense and scheduled January 31st as the trial date. One mans creation - Star Trek's Creator Gene Roddenberry said to Johnathan Frakes (Commander Riker TNG) many year ago.

So Trekker to Warrior - Lets rejoice. Star Trek isn't over! Gene Roddenberry, Paramount, Axanar and theres us, the Fans we're all friends here. Star-Trek-Lives (1975) on in each of us. So it was coming down to the jury on the 31st Jan but then Alec Peters settles out of court. Why? Legalize folks, fan film guidelines and tests - extrinsic and intrinsic. All words, rhetoric and copyrights. Thankfully Keenser must have been hiding somewhere because a warpcore breach was happily contained.

Axanar Productions was created by lifelong Star Trek fans who raised $1.4 million to celebrate their love for Star Trek. However there is another side to this lawsuit. Fan-film Guidelines have been revisited. It would appear two 15-minute episodes are the maximum amateurs can produce now as a combined "Part 1 and 2" on Youtube! not to mention a cap of $50,000 per film in fundraising donations. 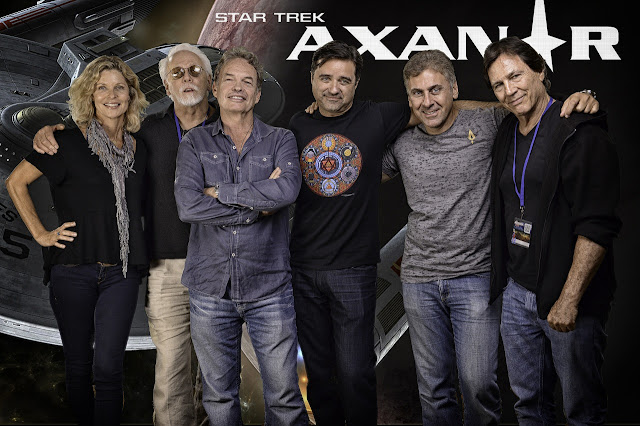 The Editor’s note on Trekmovie States It’s been over a year since a lawsuit was brought against the never made Star Trek fan film Axanar (including the previously released Prelude to Axanar) and its creators, namely producer Alec Peters. The suit, which was brought about after an unprecedented $1.4 million was raised from fan donations and Axanar store purchases (and subsequently spent, much of it allegedly not on the film itself), has changed the landscape of Star Trek fan films. The lawsuit prompted the creation of specific and restrictive fan film guidelines by CBS and Paramount, causing many fan film makers to pivot (removing direct references to copyrighted Star Trek works) or end production altogether.


On the 20th January 2017, both sides settled out of court. I guess trekkers, we'll never see the like of Star Trek New Voyages again and these rules will be an adjustment for all fan film-makers.

Have you got any favorite, celebrated Star Trek feature length fan films worth watching again? If so, which ones do you like most?

The 89th Oscar Academy Awards is honoring the best films for 2016 and is set to kick off on Sunday, February 26 2017. So is Star Trek Beyond in with a good chance of winning? OR Star Wars for that matter? Winning what? (I hear you cry,) all right, all right! Apparently trekkers, Trekcore is reporting that Joel Harlow and Richie Alonzo created the cool alien atmosphere for Starbase Yorktown.

So hilarious when Dr McCoy walks onto the USS Enterprise NCC 1701 bridge after Chekov declares:

"WOW, That is impressive"
"Awe shes a beauty isn't she?" replies Scotty
"What a Damn Monstrosity! - Couldn't we just rent some space on a planet?

So now Suicide Squad and a Man Called Ove have to set their Prosthetics on MAXIMUM to beat Star Trek Beyond's high Alien standard.


So okay,  In the visual effects preliminary. there were 20 movies. Star trek Beyond got shortlisted yet again just like Star Trek Into Darkness.

Yet Star Trek Beyond did qualify for an Oscar Nomination! Fact. Its true!!! Curiously Star Trek 2009 won an Oscar for makeup and now deja vu, we're back for Best Makeup and Hairstyle in 2017! 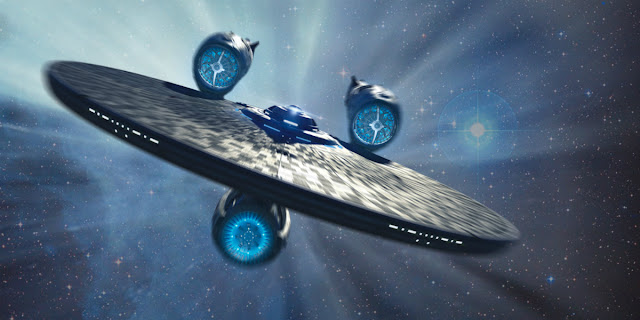 The Oscar Visual Effect Nominees are:

4. Kubo and the Two Strings

5. Rogue One: A Star Wars Story


but hey this is the Oscars!!! Joel and Richie will hold up their golden statues and say,

"Thank you Star Trek  and everyone who loves Aliens, we did this for you!"

Actor Chris Hemsworth is excited about starring in the new movie Star Trek 4. The Avengers superhero "Thor" and Captain James T Kirks father "George Kirk" made his debut while aboard the (USS Kelvin) in Star Trek 2009. -

Apparently Chris is rumoured to return for the next blockbuster Star Trek sequel. Word is Producer J.J. Abrams has pitched two versions of Captain Kirk to intersect along the space time continuum for Paramount Pictures/fan approval in Star Trek Beyond's sequel.


At this stage speculation is wild over at Cinemablend over how our master of cliffhangers J. J. Abrams will exhilarate fans when Star Trek 4 hits theaters. MTV caught up with Chris Hemsworth on the Red Carpet of the Golden Globes. Chris has confirmed that Star Trek 4 is going to happen.

Hemsworth: "he’s got an amazing sort of pitch on the whole thing"
In further developments at Slashfilm J.J. Abrams has confirmed

Abrams: “the reason we made a deal with Chris Hemsworth as soon as we could” was because they have concocted a really “amazing story.”

The good news is Paramount Pictures has confirmed that Chris Hemsworth has signed up so its a done deal!

Could George Kirk have survived in Star Trek 2009 and emerged through the other side of a black hole in some time travel twist?

Happy New Year Everyone! On 21st May 1987 Gene Roddenberry's brand new TNG crew was splashed all over the Phoenix Newspaper. At first reactions were mixed. Set 100 years in the future (2364) not everyone was convinced TNG would succeed with a bald guy in charge instead of Captain Kirk commanding the Enterprise and her crew. Of course trek wouldn't have scored big and prospered without all these beautiful females to serve and defend king and starship.

At the time Star Trek the Voyage Home hit cinema screens trekkies were all hooked on the classic crew. So when agents for William Shatner and Leonard Nimoy rubbed studio executives noses in the dirt for more cash, treks leading stars signed a 2.5 million deal each and the fourth ''Star Trek'' movie was produced in 1986. 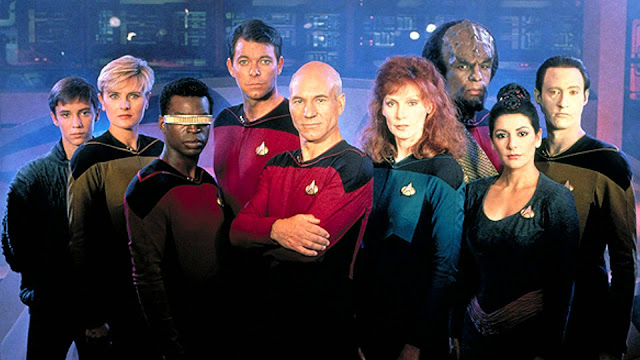 This year Star Trek The Next Generation celebrates its 30th anniversary. When TNG premiered in September 28th 1987 my eyeballs melted onto the TV screen along 27 million other fans. Thirty years on TNG is still on the air thanks to the organizational wizardry of visual effects maestro Ronald B Moore and his unique special effects. He developed systems to help organize massive projects, contractors and other elements needed to produce TNG's weekly special effects.

In todays technological computer age HD and CGI allow moves which were impossible with model ship and motion control. However ST TNG set the new standard. Yes it took years for computer generated ships to be used more and more. but TNG was there from the beginning. I couldn't find the images used when filming the Enterprise-D going to warp so heres the link instead.


Captain Picard's galaxy class starship (USS Enterprise NCC 1701) launched on stardate 40759.5 from the Utopia Planitia Fleet Yards on time. The Federation's flagship was a beauty, bigger, better, faster and loaded with extravagant technological capability - not to mention firepower and word spread. Yet TOS had a number of episodes written by major SF authors delivering cracking punchlines, wit and great stories for characters like Kirk, Spock McCoy and Uhura. 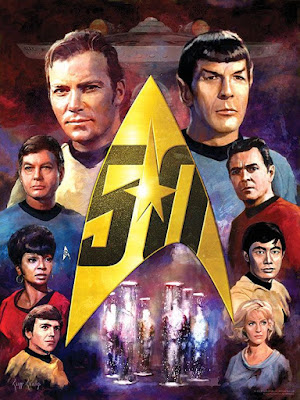 The greatest thing for me is Gene Roddenberry's Star Trek embraces a future of unlimited possibilities using twentieth century science to "make it so" in the 24th century. So now we've got starships, warp drive, dilithium crystals, transporter beams, phasers, replicators, Romulan cloaking devices, warbirds, tricorders. References to the Persian Gulf, Central America, Aids, and Captain Picard's TNG crew hopping from planet to planet was the New Star Trek in 1987. How times have changed yet again with the arrival of nutrek and Star Trek Discovery.

Isn't the 24th century cool?
Which show are you a fan of TNG, TOS, DS9, VOY or ENT?
Heres the low down on why Wil Wheaton quit Star Trek. Did he choose wisely?
Paramount Pictures sold a 78 inch model USS Enterprise NCC 1701-D at Christies auction for a princely sum.  Was it....