In Star Trek the Original Series, Kirk's first kiss with the "actress" (Barbara Anderson) was stalled when they discovered Dr Thomas Leighton, meanwhile the Enterprise transports the acting company to their next destination. 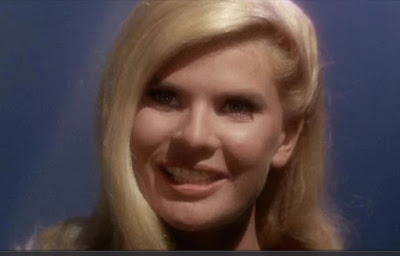 The "company" or troupe of actors included Lenores father, the suspected criminal Kodos the Executioner. So the game was afoot you might say. In any case Kirk was busy romancing Lenore, no less, hoping to pick up some clues and discover who Kodos really was. 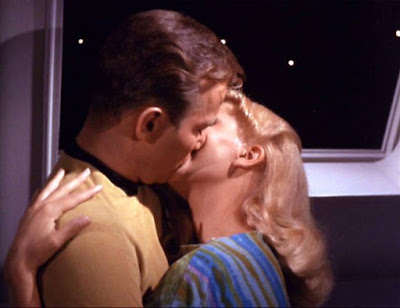 We know at this time its Lenores father but the guy really has a murky past. Sadly she's been covering for her mans ol' sins and has been killing off anyone who get too close to the truth, making the "KISS" almost fatal, a real sweetheart!

Whats the name of this classic trek episode?

1 Court Martial
2 Mirror Mirror
3 The Conscience of the King
Posted by SpacerGuy at August 29, 2018 10 comments:

JEAN LUC PICARD IS BACK


Its the Star Trek newsflash we've all been waiting to hear for ages, trekkers. 20 years have passed after Star Trek Nemesis!


Now finally, who else but captain of the USS Enterprise NCC 1701 and friend to Trekkers and Trekkies everywhere, Patrick Stewart himself stuns us all, when he appears out of the cosmos to a cheering audience in Las Vegas so thrilled to see him. Why I hear you ask? Well, our former captain had plenty to say, thats what.


The news Patrick delivered at Comic Con over the weekend infected the place with delighted, grinning trekkers. So what was it?

Jean Luc Picard is Back - Just look at Patrick Stewart beaming with arms opened wide (Below) - Says it all really. What were the fans thinking? Check out the video. Energized with excitement many trekkers were busy high fiving, while others cried and laughed for joy.

If you want to read what Patrick Stewart had to say about Jean Luc's return instead of watching the video, I've included what he said at Las Vegas Comic Con below, enjoy reading my friends.


I will always be very proud to have been a part of Star Trek: The Next Generation, but when we wrapped that final movie in the spring of 2002, I truly felt my time with Star Trek had run its natural course. It is, therefore, an unexpected but delightful surprise to find myself excited and invigorated to be returning to Jean-Luc Picard and to explore new dimensions within him. Seeking out new life for him, when I thought that life was over.
During these past years, it has been humbling to hear stories about how The Next Generation brought people comfort, saw them through difficult periods in their lives or how the example of Jean-Luc inspired so many to follow in his footsteps, pursuing science, exploration and leadership. I feel I'm ready to return to him for the same reason – to research and experience what comforting and reforming light he might shine on these often very dark times. I look forward to working with our brilliant creative team as we endeavor to bring a fresh, unexpected and pertinent story to life once more.

This #Picard news is very exciting. It's the brain child of our dear friend and lifelong Trek "keeper of the flame" #KirstenBeyer. This couldn't have happened to a better or more talented artist and human being! Exciting times for #StarTrek!


What I can honestly say is that I was aware this was in the works even before I began developing my outline for the TNG book I'm currently writing, and that carrying on the TNG storyline as we've been laying it out all this time was my specific mandate, both from my editor and CBS Licensing. I point-blank asked about any particular concerns or issues which might impact what I was planning should this come to pass, and was told to carry on with what I was doing.
Personally, I'm not too worried about the TrekLit status quo, at least as things currently stand, but that's me, speaking only for myself but based on the conversations I've had about this.
There's a particular aesthetic choice that was made by I believe Mr. Westmore. But for me, I think the coolest challenge, because I like to do this with any design that I do, is to make sense of those choices. It's kind of reverse engineering why there's tubes and stuff going in and out of things. So it'd be to try and make sense of that and then contemporize that aesthetic with what audiences demand today and expect.
I also think that there's, again, it's me, so there's got to be a little room for a little steampunk in there. A little antediluvian something. So not too retro, and not a gear, but there is a biomech feel to the the whole thing, so to go to Geiger and steampunk and find a new way to combine it and maybe play with the colours and bring the palette out of the greys and the blacks and find some rusty and cool metallic tones, then also start defining the flesh in a different way. Like if some of those limbs are necrotic, is the tube pumping life back into them? Do they change color depending on how long they've been in the collective? How does the body stay alive? There are so many things to play with. It's sort of just taking what's there and playing with it. Michael Westmore Jr. did all the lasers and lights inside of all the little LED components. That's something today with 3D printing we can push infinitely further. We can do a lot more lighting and more moving parts.

Remember Star Trek The Enemy Within a hellbent Captain Kirk making plays for Janice Rand? Well, toy company, "The Wand Company" have come up with a phaser-controlled rock mood light. Isn't that neat? Star Trek fans will recall Hikaru Pilot's Sulu's desperate attempts to stay warm on the planet surface, so here is a glowing recreation of the rock, controlled, by a phaser... and the rest you know.

The rock faithfully recreates the scene; with the phaser blast "heating" it up to full brightness, which then gradually dims once you stop firing (it is only light that you'll get though, no heat from this rock). There's also an alternate "atmosphere mode" where the rock can gradually shift through different colours and brightness. The rock is USB chargeable, and to complete your landing party experience comes complete with a Starfleet survival blanket! What will toy makers ever think of next?