Worf (Michael Dorn) makes up for his lack of a true Klingon upbringing by trying to be a super Klingon, Kapla! 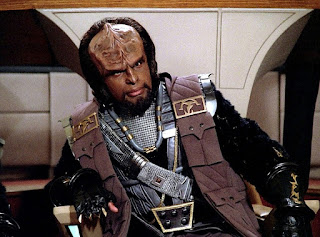 Xon (David Gautreaux) never got to play this Vulcan character, now I wonder why? He was supposed to be the USS Enterprise NCC 1701 Science Officer in the never made Star Trek II, long story short Nimoy's I am not Spock soon switched when the idea of a multi million dollar movie was in the wind. The rest you can guess. Gautreaux got a small part in Star Trek The Motionless Picture. 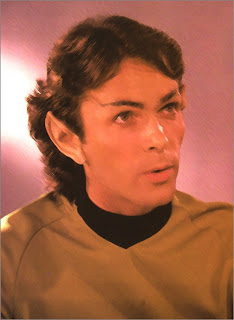 Yangs are the bitter enemies of the Kohms in the less than subtle allegory that was "the Omega Glory." 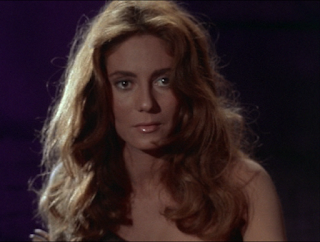 Khan doesn't give up with out a fight. 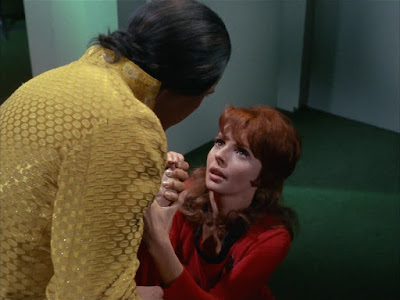 Later McGivers comes to Khan’s quarters, and he plays her like a two-dollar banjo, pretending to grow weary of her alleged fickleness, which is just her acting like a person, and gets her to practically beg him to stay. It’s an impressive display of power, and he makes it more overt when he forces her to her knees, declaring his intention to take the ship. She resists at first, but eventually says she’ll do anything he asks.


What orders would you have given to take control?
Posted by SpacerGuy at April 12, 2016 12 comments:

H is for Hunter chasing the Hunted. In 2369 Chief Engineer Miles O' Brien (Colm Meaney) befriends an intelligent lifeform being pursued through the wormhole. Star Trek DS9 Captive Pursuit shows a hunted alien, Tosk (Scott Thomson) on the run from his masters, the Hunters. Its a game of sport to them you see. Its fun watching the fox trying to outwit the bad guys in this story.

" I am Tosk says the hunted alien, I live to outwit the hunters for another day, to survive until I die with honor." 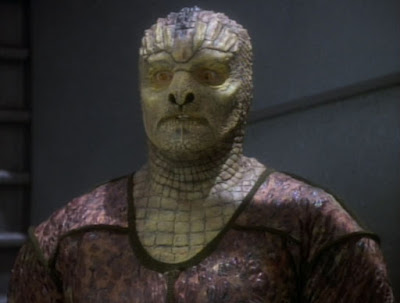 In order to help Tosk, O'Brien must decide if this alien is worth going against Commander Sisko's orders. The message is clear. The United Federation of Planets principles are in direct conflict with the Hunters culture. Tosk was bred and raised for the sole purpose to be hunted. I can just imagine Captain Jean Luc Picard (TNG) giving us a speech on the first duty of every Starfleet officer......

What would you do, help or let Tosk take his chances?

G is for GORKON but who is he? In Star Trek the Undiscovered Country VI, David Warner plays the foolhardy naive Klingon, Chancellor Gorkon who brokers peace between the Federation and the rouge Klingon Empire. Gorkon's peace initiatives are civilized and diplomatic. The Galactic powers are uneasy. Not everyone wants Peace! Its bad for business even in the 23rd century! 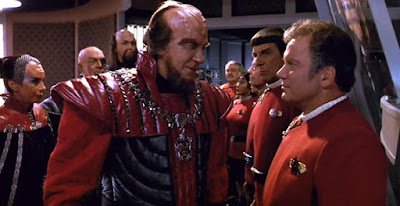 Okay, so heres someone who recognises there can be honor in peace. Is he a visionary or a fool? Who can the Chancellor trust? He has to rely on his trusted aides during "dinner time" aboard the USS Enterprise NCC 1701-A and especially General Chang his chief of staff. So its really neat when two assassins in white Starfleet uniforms close in for the kill. Who are they? Who sent them?

Its fun watching the clueless Enterprise crew piece together the clues in this wonderfully dark sherlockian murder/mystery.

KIRK "We fired on the chancellors ship!"
SCOTTY "That is not possible!"

QUESTION: Which two traitors conspired to have Gorkon murdered and Captain Kirk framed?